Skip to content
March 18, 2020/Comments Off on State records 128 new coronavirus cases in one day 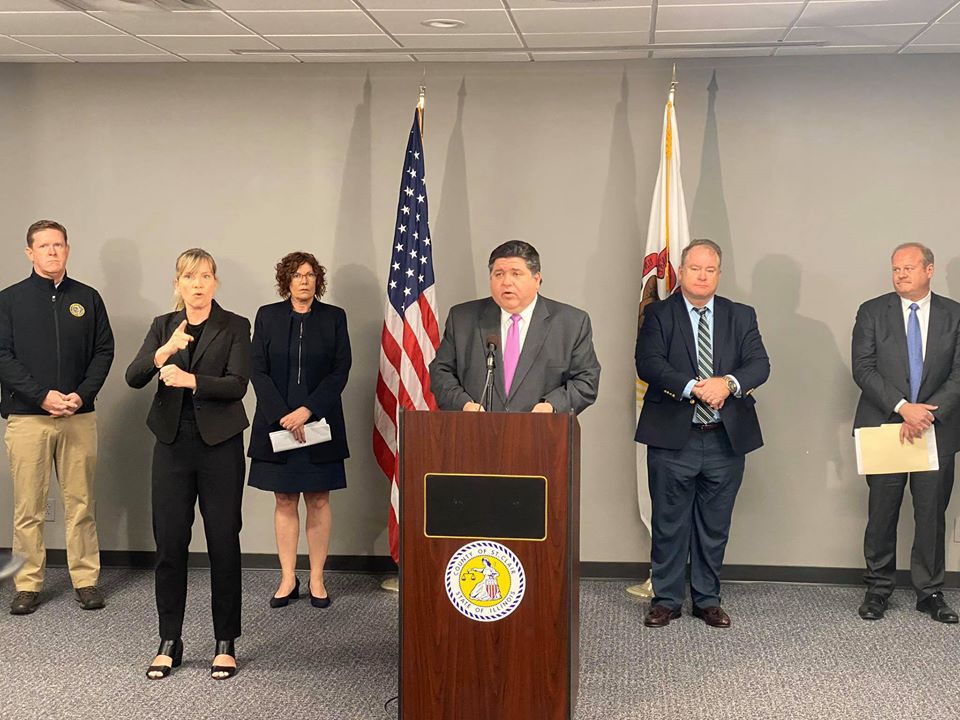 Number of known cases jumps to 288 as governor says ‘no place, no person, is immune’

The “novel severe acute respiratory illness” has now been confirmed in 17 counties, including new cases in Kendall and Madison counties.

Among the updated count are 20 new cases at a long-term care facility in DuPage County that first reported a confirmed case Saturday.

“I know how tempting it can be to look at the illnesses and deaths in other countries and think, well that could never happen here,” Gov. JB Pritzker said Wednesday at the St. Clair County Health Department in Belleville. “… It could happen here if we do not act with all due haste. From everything we know about this virus, no place, no person, is immune.”

Illinois Department of Public Health Director Dr. Ngozi Ezike added later at a media briefing in Murphysboro that “the grim truth is these numbers will continue to grow significantly, as will, likely, the unfortunate statistic of fatalities.”

The first coronavirus-related death in Illinois was announced by her department Tuesday.

Actions taken, and not, by European governments should act as “a cautionary tale,” Pritzker said. He again urged residents to stay home Ñ children should avoid seeing their friends and elderly individuals should ask neighbors for help securing supplies.

The governor said he knows the coronavirus is “taking a toll on everyone,” and he is working to provide those most affected with assistance.

“This coronavirus is damaging people in a variety of ways Ñ their health, their safety and their livelihoods Ñ and so we want to do everything we can to minimize that damage,” Pritzker said at the Murphysboro briefing.

He said he has called up 60 National Guardsmen to assist with delivering meals to children out of school, asked the federal government to ensure health care is extended to those who might not have it, opened applications for those who need unemployment security, organized with sheriffs across the state to halt evictions during the state of emergency, and established utilities will not shut off service to those unable to pay.

The “biggest challenge we’ve faced so far,” Pritzker added, is lack of testing. The root of the issue was the federal government’s decision to engineer its own COVID-19 test as opposed to using the one created by the World Health Organization.

Pritzker said he has spoken to leaders of pharmaceutical companies to put Illinois “a little bit ahead of the line” in procuring supplies needed for testing, but, he added, supplies have thus far “mostly been monopolized” by the federal government.

Ezike said the state has the capacity to test 60 to 100 samples per day, but with the ongoing deficiency of tests, “it will take every single one of us making every sacrifice that we can to reduce this virus.”

Illinois State Police Director Brendan Kelly said in Belleville that law enforcement personnel across the state are prepared to enforce the order for restaurants and bars to remain closed to dine-in customers. Failure to do so qualifies as a misdemeanor.

Kelly also said state police are operating as they do during a severe winter storm Ñ officers are focusing on calls for assistance and preparing to secure medical facilities as needed. Investigations of violent crimes are continuing, with interviews conducted largely over the phone. He added emergency calls reporting crimes in progress have decreased in recent days.

Illinois launched another online resource for residents looking to learn about COVID-19 cases, preparation tips, or in need of other resources: www.coronavirus.illinois.gov.

The Public Health Department’s statewide hotline is 1-800-889-3931, and its related email address for questions is [email protected]