Skip to content
March 19, 2020/Comments Off on As coronavirus deaths climb to 4, Pritzker says grocery stores, interstates ‘will never’ shut down 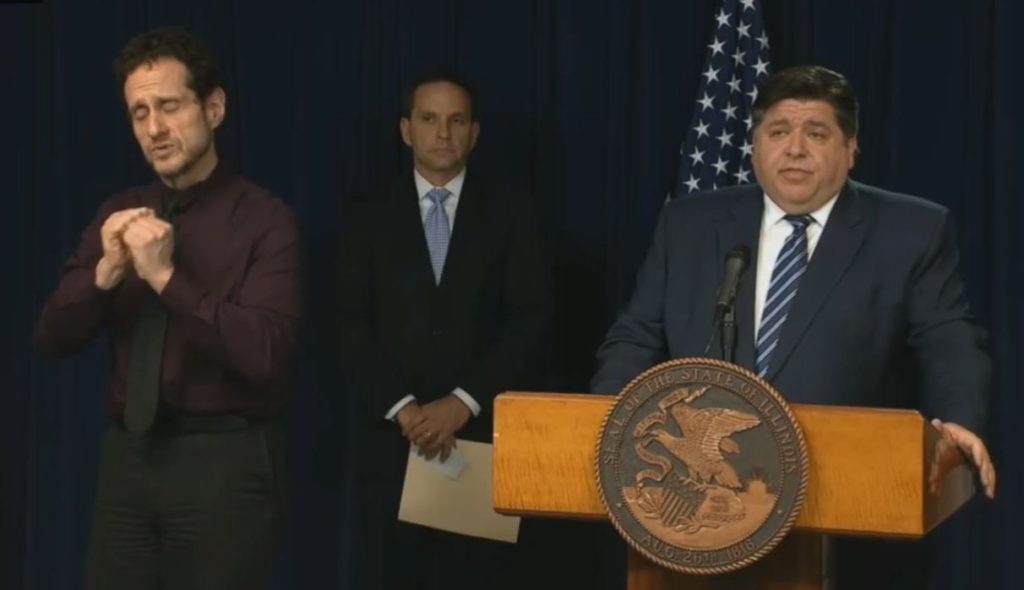 SPRINGFIELD – As Gov. JB Pritzker announced three more COVID-19-related deaths and 134 new confirmed cases Thursday, he also expressly asserted that interstate highways, gas stations, grocery stores and other essential services will not close as a response to the pandemic.

“I want to address some of the rumors that have been running around,” Pritzker said. “Essential services will not close. Interstates, highways and bridges will stay open. Grocery stores, pharmacies, gas stations – these sources of fundamental supplies will continue to operate.

“There is no need to run out and hoard food, gas or medicine,” he said. “Buy what you need, within reason. There is enough to go around as long as people do not hoard. We will never shut these services down.”

He also announced temporary tax relief for some bar and restaurant owners and cautioned that a shutdown of schools could last longer than a March 31 scheduled reopen date.

“I also think that parents should be contemplating the possibility that that might be extended,” he said of the scheduled March 31 return date.

Pritzker also said the state is “evaluating every day” as to whether a shelter-in-place order might be necessary, as, he said, experts are advising, “this is going to take longer than people have expected.”

Pritzker said the effort is largely aimed at staying ahead of countries like Italy, where there are more than 40,000 confirmed cases and more than 3,400 deaths. Social distancing, or staying home, remains the most important preventative measure.

“So when I make decisions about this, this is about how do we operate faster and better than Italy and other countries that have seen this grow exponentially for a very long period of time,” he said, noting that lack of testing means an increased reliance on mathematicians extrapolating available data over the entire population.

“And I’m gonna continue to listen to the experts to do the right thing, that the triggers are really in what the experts are seeing,” he said.

Chicago Mayor Lori Lightfoot ordered Thursday that any city resident confirmed as having or showing symptoms of COVID-19 must stay home or risk a citation. The suburban village of Oak Park issued a shelter-in-place order which starts Friday, but it allowed for several exemptions, including obtaining essential services such as grocery shopping or medical care.

Pritzker also said the number of confirmed cases – now at 422 – will continue to grow as testing ramps up. According to the Illinois Department of Public Health’s new website, coronavirus.illinois.gov, a total of 3,151 people had been tested in the state as of Thursday.

The state’s capacity for testing has increased from about 200 people per day to more than 1,000 on Wednesday, Pritzker said, adding it will be “two-plus thousand in the next few days.”

But, he said, the expected increase in coronavirus cases is also due to the virus’ spread, not just the increase in testing. He said the virus can also be spread by people who have it but have not been tested or have not shown symptoms.

“So we know this is growing substantially. And until there are more and more tests, we will be in this situation of just seeing the numbers rise because the testing is rising,” Pritzker said. “We hope that there will be a cresting. É In some countries in Asia, there’s been a cresting because they’ve implemented some of the measures that we have implemented here. We’ve done it earlier here, but that doesn’t mean that we’re not going to see a lot of cases of COVID-19, and frankly more deaths.”

Dr. Ngozi Ezike, IDPH director, said expansion of private testing labs will allow the agency to continue to target its testing at the most vulnerable populations, such as nursing home patients and the staff that care for them.

Pritzker said he called up members of the National Guard to help set up drive-thru testing sites among other logistical and transportation efforts.

“The Guard is also doing critical work planning for the weeks and months ahead, including expanding our health care capacity by potentially refitting and reopening previously closed hospitals,” he said.

In terms of concrete action in response to the virus Thursday, Pritzker signed another executive order relaxing insurance rules for telemedicine, which allows patients to see a doctor remotely, such as through a video call.

For Medicaid plans and those regulated by the Illinois Department of Insurance, the executive order calls for providers to be reimbursed at the same rate at which they are reimbursed for in-person visits, among other regulatory changes.

“This order will allow more providers to get reimbursed for these services and allow patients more flexibility and safety in getting the medical guidance and care that they need,” he said.

In economic action, Pritzker said he directed the Department of Revenue to defer sales tax payments for small- and medium-sized bars and restaurants that paid less than $75,000 in sales tax last year. Those businesses will not be charged late payment penalties or interest on payments due in March, April or May.

He also announced that the U.S. Small Business Administration has approved the state’s eligibility in all 102 counties for disaster assistance loans up to $2 million for small businesses facing financial hardship.