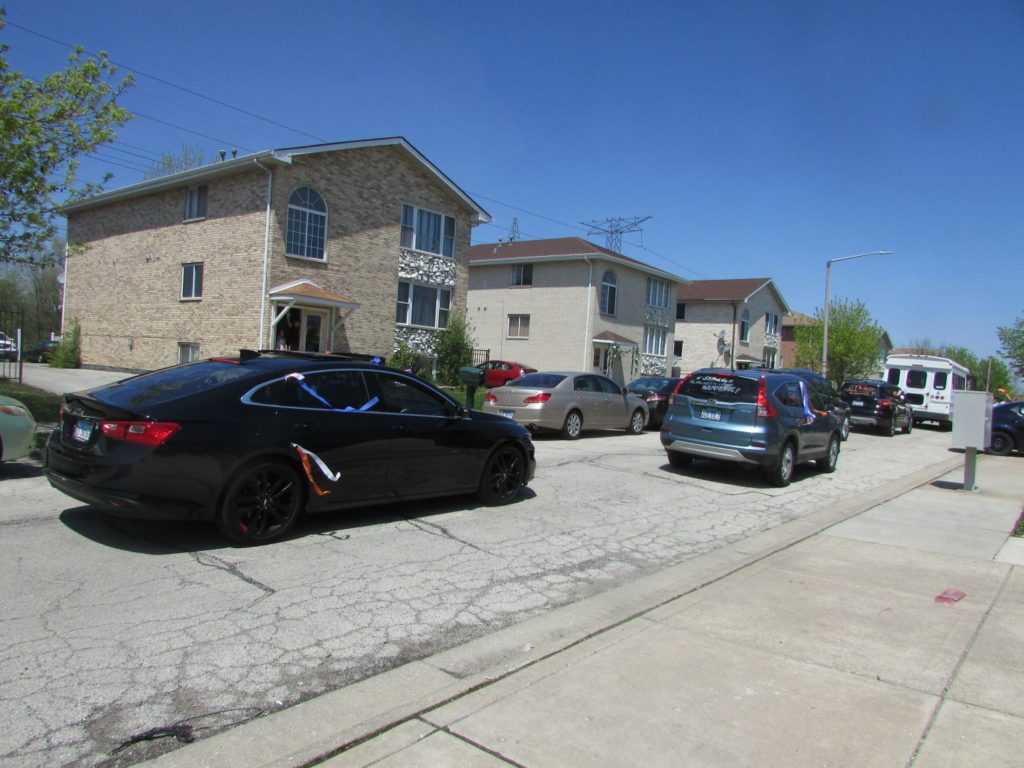 Palos Hills. But this year, with all the students at home, the celebration was

The pupil-personnel services team of guidance

counselors organized a “scholarship caravan” of several dozen vehicles that

visited all 35 scholarship winners at their homes on May 13. Stops were made

throughout Stagg’s coverage area, beginning in Bridgeview, where teachers

Hussein, who received scholarships from the school’s Parent Teacher

The festive caravan then went on to homes in

keeping to their tight schedule.

This was the first and only chance the staff

had to see students they knew for four years. Since schools closed two months

ago due to the COVID-19 pandemic, they have been communicating online.

The celebration began outside the school at

8015 W. 111th St., where masked and gloved staff decorated their vehicles in

the school colors and “Charger Pride” signs before heading off at noon.

“We’re trying to think outside the box,’ said

guidance counselor Rich Kowalczyk, who spearheaded the effort. “A lot of

schools are doing these virtual celebrations, but we wanted to do something

Kowalczyk noted that the scholarship dinner

had been scheduled for May 6. “That took a lot of organization too, but this

was more fun,” he said, noting that Leyden High School District 212, did

something similar in the western suburbs a few weeks ago.

“The only issue we had was, after coming up

with a route, we found out some of the students would be taking Advanced

Placement tests (at home) during the time we were going to pass by. So we broke

it into two routes,” he said.

230, joined the caravan halfway through, and representatives of organizations

At the traditional dinner, scholarship

winners would have seated with theirscholarship providers. Being part of the caravan

allowed the representatives to congratulate them along the route.

“This is really cool. The guidance counselors put so much work

into it,” said Suaad Rashid of Worth, who won the Mary Ogarek Scholarship. The

home, where she was with her parents, Manal and Mohammad.

Everyone wore masks, but carloads of staff jumped out to greet her

and pose for photos.

“It was a strange end to our senior year, but I think we all

learned something,” said Rashid, who plans to study chemistry at the University

of Illinois at Champaign-Urbana.”It was a sacrifice but as long as most

people remained safe (from the coronavirus), that was worth it.”

Another Worth resident, Karol Para, graduated in three years and

The caravan also celebrated the accomplishments of senior Peter

Gordan in Palos Park, another three-scholarship winner who graduated a semester

early in January. He was wearing a shirt from his new school, Columbia

University and waving Stagg colors of blue and orange with his brother, Alex, a

sophomore at Stagg, and their mother, Athena, when the caravan rounded their

corner. The founder of a nonprofit called Homes4Monarchs, Gordan plans to

“It is a lot of fun. It is great to be able to see everyone again,”

said Gordan, holding up certificates he was given for the Charger Pride,

“I hope to be able to start at Columbia in the fall, but that

“I could not be more pleased with the Stagg Scholarship

Caravan. Our Guidance Office staff did an amazing job ensuring that our

scholarship winners and their families had the opportunity to experience the

excitement and recognition they deserved even during these difficult times,”

“Our students and families were so appreciative of the

efforts of our staff and the generosity of the scholarship benefactors.

The energy of the caravan rolling through our many Stagg communities

left an impression on our scholarship award winners, but also our communities

at large. Community members young and old cheered on the caravan as it

rolled through the streets, clearly a sign that everyone was ready for some