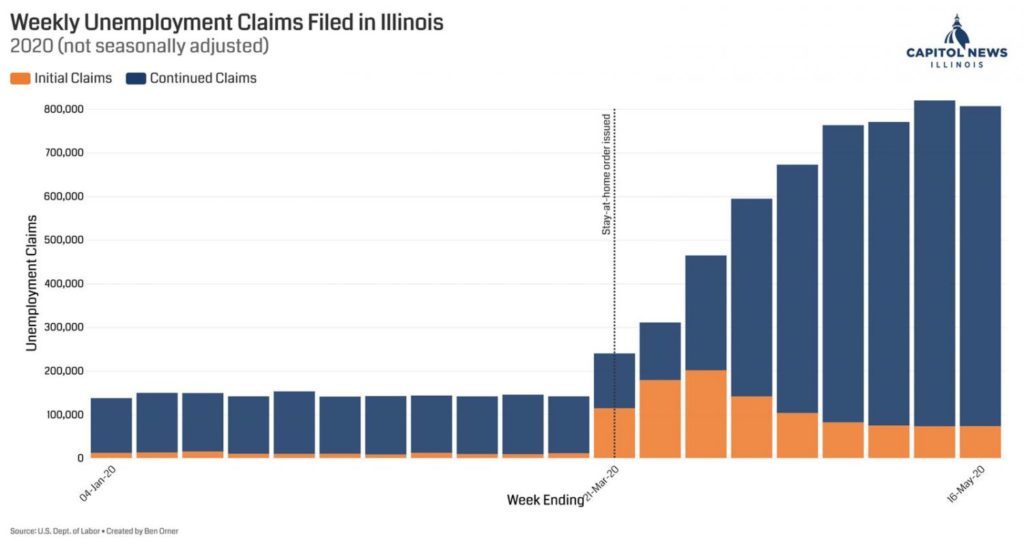 May 29, 2020
Southwest Siders breathed a sigh of relief this week, as word came that much of the state’s economy is starting to re-open as the pandemic begins to show signs of abating.
Most of the state is set to enter Phase 3 (the “Recovery” phase) of Governor JB Pritzker’s Restore Illinois plan today. Manufacturing, offices, retail, barbershops and salons may reopen to the public with capacity and other limits and safety precautions. Gatherings are limited to 10 people or fewer are allowed. Face coverings and social distancing are still the norm.
“I can’t even begin to say how happy I am that I will be going back to work,” said West Lawn resident Barb Manzullo, an administrative aide at an accounting firm in suburban Oak Brook. “I need to get back to workÑnot just for my paycheck, but for my mental health. I never knew how much I’d miss interaction with my co-workers.”
Ashburn resident Deron Walker, a machinist for a shop in Alsip, agreed.
“At last!” he said. “I’ve said for weeks that this state needs to pull up its big-boy britches and get moving on re-opening. I know that re-opening may mean a few more people get sick; but we have to compare that to the consequences of the economy collapsing.”
The news was even hopeful for Southwest Siders who work in the cityÑeven though Mayor Lori Lightfoot has said that Chicago will not enter the Recovery phase until sometime in June.
“This re-opening [everywhere else in Illinois] will put pressure on the mayor to do the same here,” said McKinley Park resident Guillermina Snchez, a nail technician in a beauty salon. “Once everyone else goes back to work [in the suburbs], people [in the city] will start demanding the same. Really, if someone in Oak Lawn can go to work, why can’t I?”
She added that for Chicago to re-open, Lightfoot will need to “make sure that the schools and day cares are open at the same time. I’m a single mom. I need to have child care [services] available. If I don’t, I can’t work.”

The encouraging news about the Recovery phase came not a moment too soon for many.

The unemployment rate in Illinois reached a staggering 16.4 percent in April, the highest rate recorded since the modern system of tracking joblessness began in 1976, the Illinois Department of Employment Security reported late last week.
The previous record of 13.9 percent was set in February 1983, according to the Federal Reserve Bank of St. Louis. The rate in April was 12.2 percentage points higher than March, which was revised downward to 4.2 percent, reflecting a revised estimate of the number of people in the labor force that month.
That news came just a few months after the state set a record low unemployment rate of 3.4 percent in November, reflecting the speed with which the COVID-19 pandemic brought about a virtual shutdown of most of the state and national economies.
The numbers reflect an overall loss of 762,200 non-farm jobs since March, the largest single-month decline in state history, and a decline of 822,800 jobs since April 2019.
“The COVID-19 pandemic has had an unprecedented impact on our economy, as has been the case in states across the nation,” Deputy Gov. Dan Hynes said in a statement. “As we move to safely reopen much of our economy, we are focused on ensuring working families and small businesses have the resources they need to recover, and we urge the federal government to step up and provide additional relief.”
IDES said that because of the high unemployment rate, extended state benefits are now available to those who exhaust their 26 weeks of regular state unemployment and the additional 13 weeks of federal Pandemic Emergency Unemployment Compensation, or PEUC.
IDES said that since March 1, it has processed more than 1.2 million claims for regular unemployment. In addition, it has processed 74,515 applications for Pandemic Unemployment Assistance, or PUA, since that program launched May 11, and another 36,367 applications for the PEUC program. Both of those programs are 100 percent federally funded.
During his daily COVID-19 media briefing, however, Gov. JB Pritzker said even those additional programs might not be enough to help unemployed workers weather the storm.
“I’ll be honest with you, I see the $600 extra that people got and are getting in unemployment benefits, even that added on top of the existing unemployment benefits doesn’t seem to be enough,” he said. “And when you think about the amount of time that it looks like, that the economists, not me, the economists are saying that it might take us to get back to normal, I’m concerned that the typical number of weeks that are allowed may not be enough.”
Perhaps not surprisingly, the Illinois leisure and hospitality industry was hit the hardest by the pandemic, shedding more than 295,000 jobs during the month, or nearly half of the sector’s workforce.
The trade, transportation and utilities sector lost just fewer than 100,000 jobs, or about 8 percent since March. Professional and business services shrank by 93,800 jobs, or 11.3 percent.
If there was any good news in last week’s report, it was that the economic impact of the pandemic and shutdown orders showed signs of leveling off.
The U.S. Department of Labor said Thursday there were 72,816 new claims for unemployment filed in Illinois during the week ending May 16 – a staggeringly high number, but an increase of just 145 from the week before.
In addition, for the week ending May 9, there were 733,466 workers in Illinois receiving continuing unemployment benefits, a decrease of 22,446 from the week before.
Pritzker said last week that all four regions of the state are on track to enter the next phase of his reopening plan (on May 29). That will enable most offices and retail establishments outside Chicago to reopen, using social distancing restrictions. Also, bars and restaurants outside the city will be allowed to open for outdoor seating using social distancing practices.

Capitol News Illinois is a non-profit, nonpartisan news service covering state government and distributed to more than 400 newspapers statewide. It is funded primarily by the Illinois Press Foundation and the Robert R. McCormick Foundation.