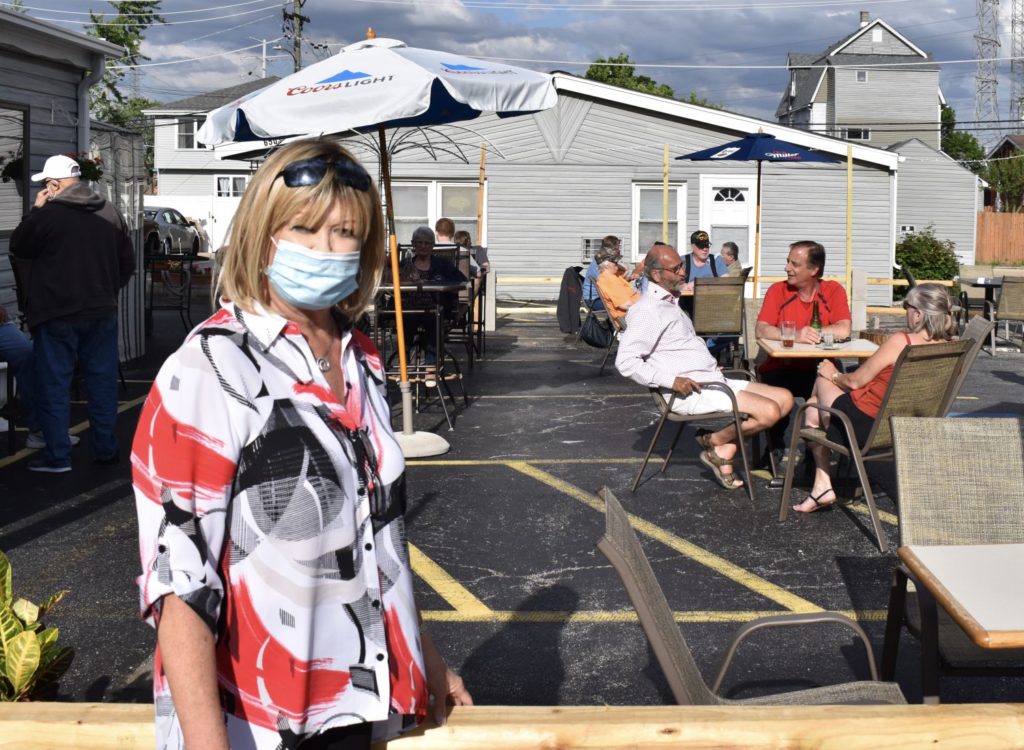 Violence sparked by protests and demonstrations in Chicago and some

weekend for restaurants that had been suffering for months under restrictions

aimed at combatting the spread of COVID-19.

Under state guidelines, restaurant servers will wear masks and gloves and

tables will be six-feet apart. Employees will have their temperatures taken at

the start of their shifts. Restaurants will be allowed about half of their

Restaurants that had patios or makeshift outdoor seating areas were

pleasantly surprised by the number of people who showed up on Friday, the first

day they could resume serving dine-in customers as long as they were outdoors.

Diane Roderick, owner of Buck’s Pit Stop in Hodgkins, said she was “busier

of the restaurant’s parking lot.

“We took out part of the south parking lot to add a patio,” she said before

opening the doors at 6501 Kane Ave. in Hodgkins for the first time since

mid-March. Like a lot of restaurants, Buck’s had been offering curbside pickup

“My girls are anxious to get back to work,” said Roderick. “They are

anxious to see everybody.”

Buck’s, like other restaurants, also took advantage of the shutdown to do

some work inside the building after 22 years.

“We did some painting,” she said. “Some rearranging. Some major work as

well as minor upgrades. The stuff we couldn’t do when the restaurant was

operating normally. It will be worth it.”

There are some changes.

“We will be closed on Mondays,” she said. “The patio will be open from 11

a.m. to 9 p.m. This is a neighborhood. We try to be respectful for our

Almost all of her staff came back for the reopening.

“One of my girls didn’t come back. She decided to go to college. I’m so

“We put tents in front of all three locations,” said Georgia Les, manager

in Hickory Hills and Prime Time across the street at 7750 W. 95thSt. both have patios,

“We hope to have seating for about 20 in each of the tents,” she said.

Gertrude and Jerry Mnlacek, of Burbank, stopped at the Oak Lawn location

Friday to enjoy their first meal outside in two months.

“I prayed for this. We are just so happy to be here,” said

Gertrude. “I wear a mask when I have to,” she said, indicating the

one around her neck. “But I am healthy and am not concerned about being

At least half of the 24 tables were filled about noon on Friday.

was looking forward to the reopening.

The bocce ball courts will also be open.

“We will follow all of the guidelines as well as use some common sense,”

Maira said the restaurant is taking reservations, but will accommodate

One concession he said he was making to the pandemic was entertainment.

“We are cancelling all entertainment this summer,” he said. “We will bring

it back in the fall.”

Other restaurants that began offering outdoor dining on Friday were Capri

Ristorante, 12307 S. Harlem Ave. in Palos Heights, which had a tent cover for

its backyard patio as well as some sidewalk seating in the front; JC’s Pub

& Grill, 8650 Joliet Road in McCook, which opened two patios for lunch and

Association, said that outdoor seating would not be a solution for every

restaurant, but it will be “a benefit to many at a time when every dollar

Toia said that more than half of Illinois

restaurants have closed during the stay-at-home order, plummeting sales by 70

to 80 percent and putting 321,000 employees out of work. He called Pritzker’s

the world how innovative Illinois can be.”

Orland Park took that message to heart and

restaurants are allowed to reopen, they will now have options for increasing

be seated, more hosts and the list just grows.”

Restaurants are not expected to open for