Skip to content
July 31, 2020/Comments Off on ‘Someone’s going to get killed’ 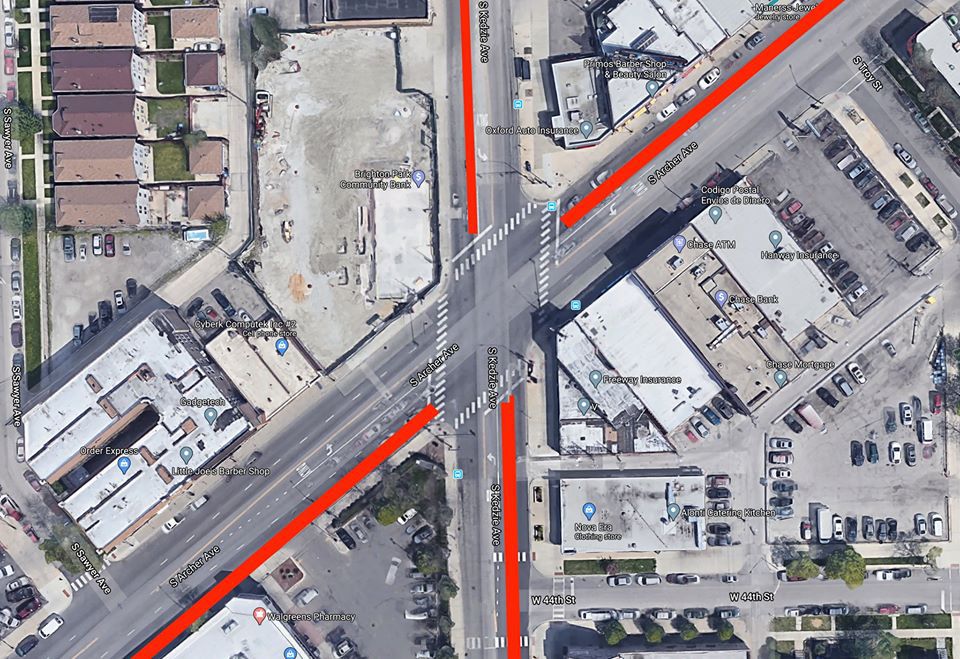 ‘Someone’s going to get killed’

Brighton Park motorists and pedestrians are claiming that a decision by city officials is putting their health and safety at risk.

The decision is to change the traffic lights at Archer and Kedzie from the traditional red/amber/green pattern to a simple flashing red in all directionsÑmaking the lights, in essence, a stop sign.
“This situation makes no sense and is unnecessarily putting people’s lives at risk,” said Brighton Park resident Charles Juncal, one of several Brighton Park residents who spoke outside the Walgreens at Archer and Kedzie. “The mayor or whoever ordered this needs to reverse it, now. Someone’s going to get killed.”
Vanessa Ramos agreed.
“People already drive like idiots at Archer and Kedzie,” she said. “This will only make things worse because so many people don’t understand the rules with a flashing red light. A lot of drivers won’t wait their turn. It’s going to be a mess. We’re going to see more crashes here.”
Yesenia Rocha said her motherÑwho does not driveÑ”walks across that intersection almost every day, to get her meds from Walgreens and shop at a few other stores. With the old [traffic light configuration], things were clear or when to talk or not walk. Now that’s gone, and the pedestrian crosswalk is a no-man’s land.”
Finding out why the change was made or even which city agency is responsible for it has been a challenge.ÊA Greater Southwest News-Herald request for comment was initially turned away by the Chicago Police Department, where a spokesman suggested contacting the Chicago Department of Transportation for comment. CDOT, in turn, suggested that CPD should respond, which generated a vague statement from CPD officials about Archer and Kedzie: “The safety of our residents is CPD’s top priority. The Chicago Police Department employs many different strategies to combat and prevent violence, and works with other City agencies with the goal of saving lives.”
Running into the same wall of confusion was 15th Ward Ald. Raymond Lopez.
“Every single time my office received a call [over the past three weekends, we would inform the Chicago Department of Transportation to correct the problem. That occurred on the first week and then again on the second week,” the alderman said. “At no point did the Department of Transportation or its commissioner inform me what was really going on.
“It wasn’t until we contacted the Office of Emergency Management and Communications that we were close to finding the real issue here,” Lopez continued. “The Chicago Police Department was purposely deactivating the traffic signal and intentionally setting them to flash red in all directions on the weekends. The reason my office was given by OEMC was for public safety at the direction of the Area Commander.”
He added that the city’s move was “completely unacceptable and downright dangerous.”
In a follow-up interview on Monday morning, Lopez told the Greater Southwest News-Herald that the Lightfoot Administration is “recklessly opening the door for lawsuits [from affected motorists and pedestrians].”
The Archer/Kedzie intersection is located in the heart of Brighton Park and is perhaps the most heavily trafficked intersection in the neighborhood.
“This is yet another example of the Lightfoot Administration’s decision-making process that is not just bad policy for the community, but endangers my residents,” Lopez added. “It’s time this mayor start listening to the aldermen who know their communities because they were elected to represent their wards.”
(Editor’s Note: More news coverage and photos in the print edition of the Greater Southwest News-Herald, available on local newsstands. Or better yet, call 708-496-0265 during weekday business hours and order convenient home delivery for about 50 cents a week.)