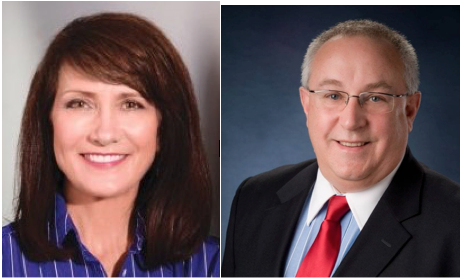 One thing is certain, no matter who wins on Nov. 3, the 3rd Congressional District will have a new face in the next Congress.

Longtime representative Dan Lipinski was unseated in the March Democratic primary by La Grange management consultant Marie Newman, who was making her second run at the congressman.
Newman now faces Will County Board member Mike Fricilone, of Homer Glen, who is the minority leader on the county board.
Fricilone, 66, was a reluctant candidate and entered the March primary to keep Art Jones from winning the nomination, again. Jones was the GOP candidate in 2018 and was repudiated by Republican leaders because of his views on the Holocaust and past connections as a neo-Nazi.
“I ran because we needed to have someone on the ballot who was not Art Jones,” Fricilone said.
But now that he’s the candidate, he’s running to win in the district that stretches from Bridgeport all the way out past Joliet.
“Marie Newman is too liberal for the district,” he said. “I have had regular Democrats telling me Marie doesn’t represent their views. There are a lot of union workers and first responders in the district and they are more conservative.”
In some ways, the general election is a rerun of the last two Democratic primaries with the liberal Newman squaring off this time with the conservative Fricilone, a native Southwest Sider who attended Kennedy High School.
Although a Republican, Fricilone said he shares many of the conservative values espoused by Lipinski.
“This district is made up of union Democrats, not liberal Democrats,” he said. “My agenda in Congress will be similar to mine for Will County: Represent the people.”
If elected, he said he would join the Problem Solvers Caucus, which counted Lipinski among its members. The group is made up of House Republicans and Democrats.
“Its function is to bring Congress together,” he said.
Putting the country back to work is a top priority, he said.
“We need to get help to the unemployed and help prop up the economy,” he said. “The country needs a second CARES package.”
He said a COVID-19 vaccine would help bring back the economy, which he said has already started recovering.Ê
“I read that retail sales are already back to pre-COVID numbers.”
As for health care, he was opposed to Medicare for All. “It would be too costly.”
Newman is the Democratic candidate in a district that has been safely considered Democratic. But she is not taking anything for granted on the campaign trail.
In fact, a poll commissioned by Cook County Republican Party Chairman Sean M. Morrison, of Palos Park, found Fricilone within striking distance of Newman.
Morrison said the polling firm Ogden & Fry showed Newman with 46.1% compared to 43.9% for Fricilone. Ten percent were undecided.
The Ogden & Fry poll spoke with 608 likely voters and had a margin of error of 3.63%. The poll was conducted on Sept. 5.
“We have had 400 meet and greets and knocked on 120,000 doors,” Newman said. “I have had outstanding conversations with voters from Chicago to Will County. The people have been very embracing.”
She also has brought together a coalition of suburban mayors and city aldermen. More than a dozen suburban mayors recently endorsed her candidacy.
Newman, 56, advocates a liberal agenda, including Medicare for All. “We all have to work together to get health care for all Americans. We need to prop up the ACA, make it better. One way to do that is Medicare for All.”
She also plans to follow in Lipinski’s footprints in being a strong advocate for transportation and infrastructure needs in the district.
She will ask to take Lipinski’s place on the Transportation and Infrastructure Committee, if elected.
“My team has already been working with local mayors on their transportation needs,” she said. “We are at the crossroads of America and we need to address the aging infrastructure.”
“Addressing those issues also will bring new jobs,” she said. “It’s not rocket science.”
Newman said she would work on lowering the nation’s carbon footprint and fight climate change.
“Fires in California, hurricanes and other natural disasters are a problem we can no longer afford to kick down the road,” she said.
“It’s as critical as fixing our aging infrastructure.”
Locally, she said increasing Metra service on the Heritage Corridor Line to downtown Chicago is another priority.
“We have to create supply and demand at the same time,” she said. “We have to figure out a way to make people are aware that the service is available and then work to provide more service.”
Mail-in ballots have been mailed out, early voting has already started at 51 locations across the city. The General Election is Tuesday, Nov. 3. Polls are open from 6 a.m. to 7 p.m.
(Editor’s Note: More news coverage and photos in the print edition of the Greater Southwest News-Herald, available on local newsstands. Or better yet, call 708-496-0265 during weekday business hours and order convenient home delivery for about 50 cents a week.)