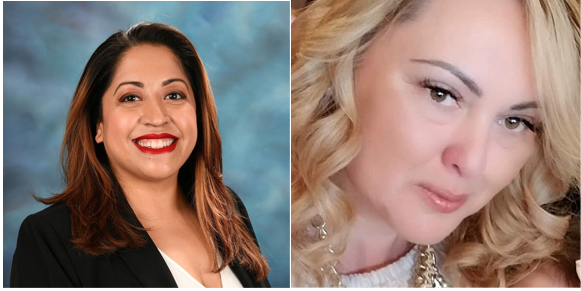 Over much of this year, Brown has worked to highlight those two issues and exploit them to her advantage in the Nov. 3 General Election.
The 11th District includes all or parts of Brighton Park, Clearing, Gage Park, Garfield Ridge, Little Village and West Lawn; and all or parts of such suburban communities as Bedford Park, Burbank, Cicero, Forest View, Lyons, McCook, Riverside, Stickney and Summit.
This is Brown’s first campaign for public office. This is Villanueva’s first campaign to be elected state senator. She was appointed to her post earlier this year to fill the vacancy created when incumbent Martin A. Sandoval resigned after pleading guilty to charges of corruption. Prior to that, she had served as the appointed state representative of the 21st District since July 2018.
Villanueva is running as the Democratic Party’s nominee. Brown is running under the banner of Democracy in America, a political party she created for this race.
Whoever is elected in November will represent the district for the final two years of what had been Sandoval’s four-year term.

Brown, the president of the Garfield Ridge Chamber of Commerce, has repeatedly reminded voters that Villanueva was the only Midway-area elected official to sign a statement condemning Chicago Police over its response to protesters in the Loop.

The statement came in the form of a letter penned by United Working Families, a leftist political organization.

It was written in response to police actions on the weekend of Aug. 15-16, when police responded to pushing and hitting by protesters (one protester was seen whacking a police officer over the head repeatedly with a skateboard) with pushback that included pepper spray, arrests and what appeared to be kettling, a crowd-control tactic in which police essentially surround protesters on three sides and prevent them from leaving an area.

Villanueva and others called for an end to what they called “police surveillance and abuse” and called for “defunding a department that has failed to protect people from harm, and re-investing those resources in the things people truly needÑlike cash payments, healthcare and non-violent crisis intervention servicesÑin order to be cared for.”
Brown has a record of support for police and other first responders. Both as GRCC president and as an individual business owner, she has made statements and taken action in support of police, especially those on the front lines.
“Police are important, both to business owners and the community at large,” she said last summer. “They put their lives on the line every day. They should be supported, not scolded.”
Brown said her “back the blue” message has played well across the district, but especially in city neighborhoods with large numbers of police and other first-responder families.
She added that she is not proposing blind support of police, but rather to “give them enhanced training that will better equip them to deal with challenges like mental illness and opioid addiction.”

Brown said that “talking about ‘defunding’ the police is demoralizingÑand I think a gateway to abolishing police departments.”

Villanueva’s campaign website makes little mention of her views on law enforcement. A Greater Southwest News-Herald request for an interview was fielded by a campaign spokesman who said the senator was not availableÑand then in response to a subsequent request, said that a family emergency prevented Villanueva from speaking.

Brown also mentions her opposition to the proposed Illinois Fair Tax Amendment as a key difference between her and Villanueva.

She views the proposed switch to a graduated state income tax as something that may be “a gateway” to politicians taxing retirement income and raising taxes on small businesses down the road.
“If we’re talking about taxing billionairesÑwell, there are 18 in Illinois, and six of them are named Pritzker,” Brown said. “Maybe we should just ask the Pritzkers to write checks and send them to Springfield.”
Gov. JB Pritzker campaigned on a Fair Tax proposal when he first ran for governor in 2018Ñsaying the idea would make the state’s tax code more equitable, provide tax relief to most Illinois residents, better fund government services, and help small businesses. Villanueva, like just about all Democratic lawmakers, is urging a “yes” vote for the Illinois Fair Tax.

A district heavy with immigrants

As a political disciple of U.S. Rep. Jess “Chuy” Garca (D-4th), Villanueva has been a champion of immigrant and refugee rightsÑas well as measures designed to reduce and eliminate racial and ethnic disparities in employment, education, housing, health care, human services, voting access and more.

Her campaign biography notes that with “immigrant rights advocates she worked to pass the Keep Illinois Families Together Act, prohibiting law enforcement from working with ICE. She also worked to pass the RISE Act, that would allow eligible undocumented students and transgender students who are disqualified from federal financial aid to apply for all forms of state financial aid.”
Before she became a public official, Villanueva worked for the Illinois Coalition for Immigrant and Refugee Rights, where she “ran the largest immigrant civic engagement program in the state, registering over 200,000 new American voters,” according to her campaign biography. She also “worked with her community to pressure lawmakers to pass online, same-day and automatic voter registration – all of which are now law.”
That stance has served her well in a district heavy with immigrants from Mexico, Central and South America, Poland and other countries.
Brown, the granddaughter of immigrants, has also voiced support for immigrants.
“Immigrants are the backbone of this country,” she told the Greater Southwest News-Herald. “Everybody came from somewhere.” She added that all immigrants should have a clear pathway to citizenship.
The daughter of Mexican immigrants, Villanueva is an alumna of the University of Illinois-Urbana Champaign, and Kenwood Academy High School on the South Side.
Originally from the North Side, Brown is a 1991 graduate of Notre Dame High School for Girls. She grew in up working in her family’s businessesÑmostly hardware stores in Bridgeport and Back of the Yards, but also a coin laundry and small hotel.
In 2004, her family purchased Midway Storage, 5660 W. 55th St.. Today she serves as owner and manager of the business.
Early voting is occurring now through Election Day at sites across the city and suburbs. For locations and hours, visit chicagoelections.gov (city sites) or cookcountyclerk.com (suburban sites).
(Editor’s Note: More news coverage and photos in the print edition of the Greater Southwest News-Herald, available on local newsstands. Or better yet, call 708-496-0265 during weekday business hours and order convenient home delivery for about 50 cents a week.)