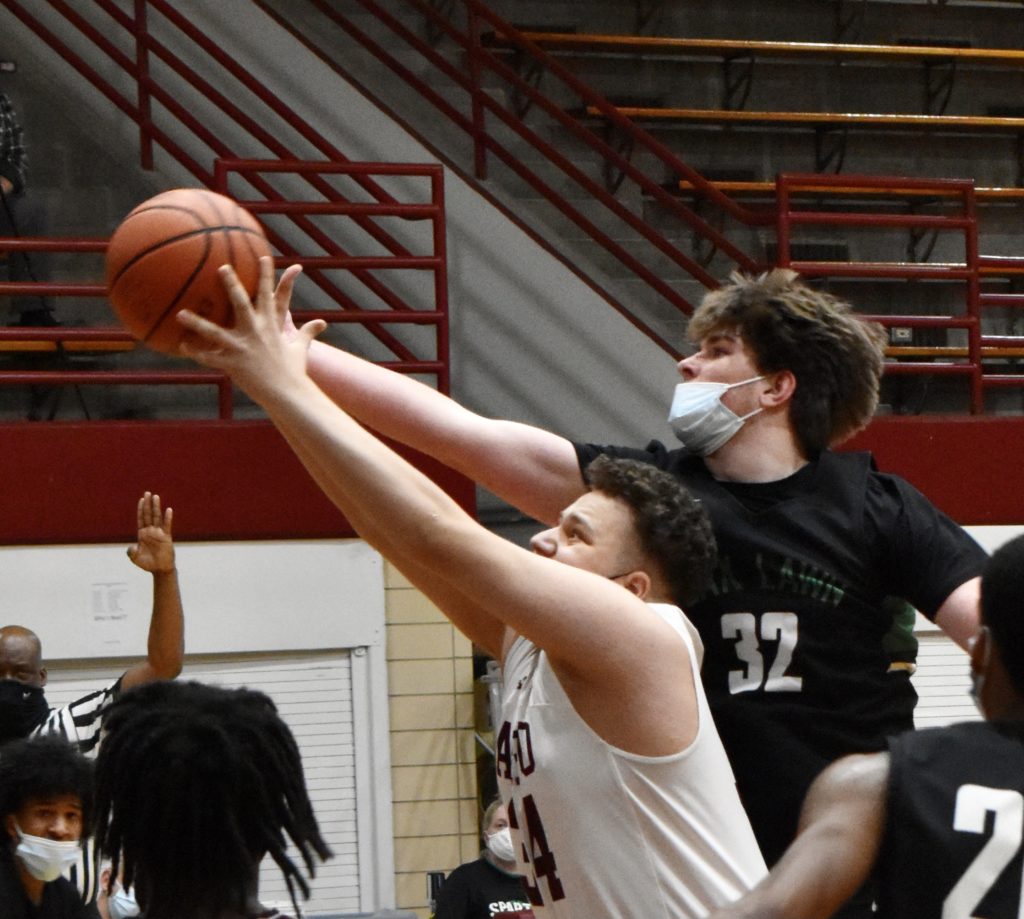 Argo’s Jalal Qteish and Oak Lawn’s Ryan Conrad stretch for a rebound in their game Feb. 25. Photo by Steve Metsch

Having practiced the shot daily, Oak Lawn junior guard Gavin Butler knew exactly what to do when he caught a pass in the corner late in the first quarter at Argo.

Butler squared up, took aim and swished a three-pointer as time expired.

His trey gave the Spartans a commanding 27-13 lead, an advantage which would increase exponentially as the game wore on.

“We practice those corner threes every day in practice,” Butler said. “I wanted to make sure I hit it, make sure I give the team momentum.”

Oak Lawn won handily despite a valiant effort by the undermanned Argonauts. Argo had just seven players in uniform, yet managed to outscore the Spartans 13-9 in the second quarter before fading.

“I’m very happy with the win,” Butler said. “They were a very good team. [Evan Shelton] is a very good player. Lots of respect to him.”

Eleven players scored for Oak Lawn. Junior guard Nicco Reyes led the Spartans with 13 points, 11 of which came in the third quarter, when he hit a trio of 3-pointers.

“We try to shoot the apple a lot in practice, and they love shooting them in games, too,” Rhodes said. “It’s a fun way to play.”

“We put up 27 points in the first quarter, so you’ve got to be happy with that,” Rhodes said. ”We had another big third quarter to kind of put them away.”

“He came up big for them,” Rhodes said. “Eventually, we were kind of able to lock him up, but, yeah, he wasn’t on the scouting report like that.”

Argo coach Pat Maiette acknowledged his team is challenged by having just seven players. Seven guys who were on the team as juniors last season are, by their own choices, no longer with the program. Another three Argonaut players were academically ineligible for the game.

“[Rhode’s] got 16 guys,” Maiette said. “That’s a community and a team that’s bought into wanting to play.”

“We’re outmanned, but we’re not going to quit,” he said.

Rhodes said the lack of depth hurt Argo in the second half.

“I feel for Pat and his guys,” Rhodes said. “No seniors. I’ve been through that before myself.”

Oak Lawn outscored Argo 37-22 in the second half, and held Argo to nine points in the fourth quarter.

“We hunkered down and played man-to-man in the half court,” Rhodes said. “That’s kind of been our recipe this year.”

“I love this team,” Butler said. “Everybody wants to play. Everybody loves the game. We have a lot more fun when everybody gets going.”