Skip to content
March 5, 2021/Comments Off on ‘They are not touching the statue’ 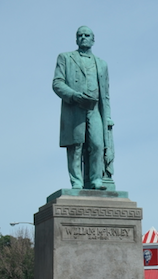 ‘They are not touching the statue’

March 5, 2021
Some McKinley Park residents are pushing back against what they see as a misguided attempt to erase historyÑand even the neighborhood’s identity.
The resistance came in response Mayor Lori Lightfoot’s unveiling of the Chicago Monuments Project website (chicagomonuments.org) last month. The site lists a handful of works of public art that some people view as problematic because they may in some way represent racial or ethnic bigotry to some people.
The statue of President William McKinley that has stood at 37th and Western for more than a century is one of those public works of art, although the website does not specifically state why.
The first response came from 12th Ward Ald. George Cardenas, who tweeted, “Leave McKinley Park alone, please!”
In subsequent discussions on local Facebook groups, the alderman added, “Nothing is going to happen without community input. I’m personally against removing anything that is simply for political gain.”

A short time later, he added, “They are not touching the statue.”

The Chicago Monuments Project is a Lightfoot Administration initiative is “a powerful opportunity for us to come together as a city to assess the many monuments and memorials across our neighborhoods and communitiesÑto face our history and what and how we memorialize that history,” Lightfoot said in a statement. “Given the past year and in particular the past summer that made clear history isn’t past, it is essential that residents are a part of this conversation. This project is about more than a single statue or mural. It’s about channeling our city’s dynamic civic energy to permanently memorialize our shared values, history and heritage as Chicagoans in an open and democratic way.”

Public input on the works of art will be accepted through the end of March.
Other works of art under review include those memorializing Presidents Lincoln, Washington and Grant, Benjamin Franklin, Father Jacques Marquette and Louis Jolliet, interaction between white explorers and Native Americans, and more.
The Project “is the City’s first effort to grapple with the often unacknowledged – or forgotten – history associated with the City’s various municipal art collections and provides a vehicle to address the hard truths of Chicago’s racial history, confront the ways in which that history has and has not been memorialized and develop a framework for marking public space that elevates new ways to memorialize Chicago’s true and complete history,” a Lightfoot Administration press release said.
A source close to the project told the Greater Southwest News-Herald that the effort is in its infancy and could conceivably expand to eventually rename parks (such as Marquette Park) and schools (such as Mark Twain Elementary).

Shoppers outside the McKinley Park Mariano’s last Sunday showed a mix of opinions.

“This is cancel culture come to Chicago,” said Vince deSimone. “We don’t like something about the past, so let’s just erase it, like we’re angry little kids playing in a sandbox. It’s disgusting.”
Arvin Winkler wondered “Éhow in the world the mayor finds time for all this nonsense. Has all the snow been picked up? Has everyone been vaccinated against COVID? Are there no more crimes to solve? She needs to get on top of the real problems before she tackles symbols of history.”
Alejandra Vega said she would be OK removing McKinley’s statue “if there’s some real problem with it. But don’t rename our park or our neighborhood. We like it as it is.”
Gilberto Jimenez does not want the McKinley statue removed, “but I think we could and should be building monuments to the heroes of modern times, like Csar Chvez or somebody like that.”
(Editor’s Note: More news coverage and photos in the print edition of the Greater Southwest News-Herald, available on local newsstands. Or better yet, call 708-496-0265 during weekday business hours and order convenient home delivery for about 50 cents a week.)