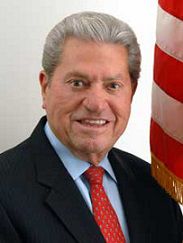 “Lou did a number of things right for a number of years,” said Pyle, who has served as a Burbank alderman for 26 years. “But it’s time for a change. I don’t like some of the stuff going on.”Ê

“I stand on my record. I look back with pride on what we have accomplished,” said Viverito, 89, who has served as supervisor for 48 years. During that time, he also served in the Illinois Senate and on the Metropolitan Water Reclamation District board.Ê

Pyle said it wasn’t hard to give up his aldermanic seat in Burbank’s 7thÊWard.Ê

“I almost didn’t run last time,” he said. “I decided a year ago that if I ran, it would only be for one more term.”Ê

Pyle believes the township will thrive under his new leadership. Ê

“We need to take care of our people,” he said promising longer hours at health clinics and senior centers in the township. “The money is clearly there, so it wouldn’t be a burden on taxpayers.”Ê

Pyle said he sought candidates for his Township Improvement Party slate that will help bring changes to the township government.Ê

“If I wasn’t of sound mind and body, I wouldn’t run,” said Viverito.Ê

He said his accomplishments include helping create the Stickney Township Health Department, which operates clinics in Burbank and Stickney.Ê

“I wish other townships would create their own health districts,” he said. “I made ours because 48 years ago, Stickney Township was not healthy. We offer dental care to seniors, have mobile clinics that visit schools and offer vaccinations.”Ê

He said the township is in good shape under his leadership.Ê

“All our funds are in the black. All of our pensions are fully funded. We have not had a tax increase in years.”Ê

He said all township buildings have had additions built over the years.Ê

“His ticket is not as qualified as our slate,” said Viverito.Ê

Jay Grider is running as an independent candidate for supervisor. He was not able to be reached.Ê

Neither ticket has slated a candidate for township assessor.Ê

Both Viverito and Pyle said they had candidates in mind, but both were unable to run because of missing credentials brought on by the pandemic. Both said an assessor would be appointed once they received the necessary accreditation.Ê