June 9, 2021/Comments Off on An en-Courage-ing result: Red Stars down North Carolina behind Naeher’s third shutout 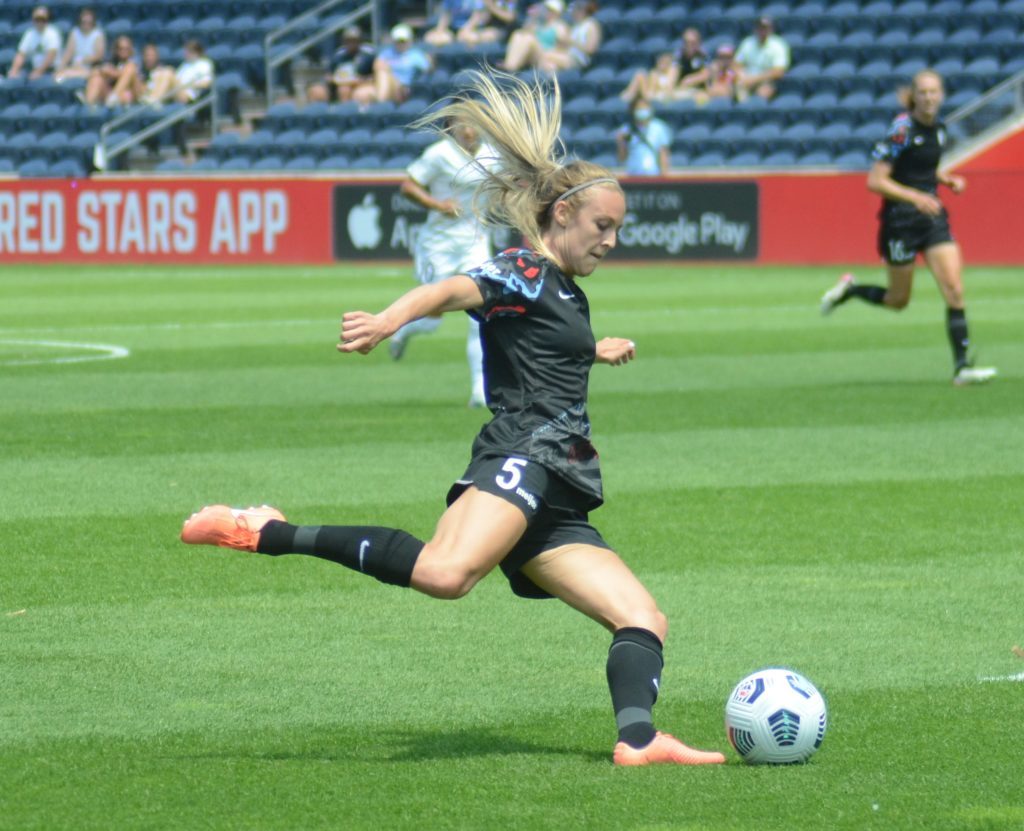 Rachel Hill gets ready to take a shot for the Red Stars against North Carolina. Later the in the match, she scored the lone goal in Saturday’s 1-0 win in Bridgeview. Photo by Jeff Vorva

North Carolina has been an NWSL power since coming into the league.

The Courage debuted in 2017 and won the regular season title in its expansion season, then finished runner-up to league champion Portland.

In both 2018 and 2019, the Courage won the regular season titles and league championships, including a 4-0 victory over the Chicago Red Stars in the 2019 title game.

There was no NWSL season in 2020 because of the pandemic, so heading into 2021 the Courage had seemingly done it all in its brief three-year tenure in the league.

Well … except one thing.

The Courage had never won a game in Bridgeview. In five meetings against the Red Stars on the road, NC had a tie and four losses. That included a regular-season battle that drew 17,388 on July 21, 2019, shortly after the United States Women’s National team won the World Cup.

That losing trend continued June 5. The Courage came into SeatGeek Stadium full of steam after a 5-0 slugging of Louisville, but the Red Stars defense held the Courage to one shot on goal and Rachel Hill scored in traffic in the 29th minute to give Chicago a 1-0 victory in front of a sparse crowd. Attendance figures were not available.

“This is a tough place to come,” Courage coach Paul Riley said after his team fell to 1-2-1. “We don’t play well here. I don’t know what it is about this field or this stadium or whatever it is. We never get a good result here.

“Maybe we’ll have to change hotels or something.”

The Red Stars improved to 2-2-1 heading into the international break and are now in sixth place in the 10-team league. They were 10th two weeks ago.

“Any win is big, and it gives you confidence,” Stars midfielder Sarah Woldmoe said. “It helps our principles and team identity. Any kind of win under your belt is going to reinforce those things and hopefully we can carry that on to the next match and the next match.”

Look who’s back
Alyssa Mautz, who had ACL injuries in 2019 and 2020, was back on the field against the Courage, coming in at the 71st minute. She had 14 touches and nine passes.

Look who’s leaving
Goalie Alyssa Naeher, who has three shutouts in five games this season, and defender Tierna Davidson were scheduled to leave for USWNT camp, which includes four games.

It is possible that between the camp and Olympic Games in Tokyo, the two will not play for the Stars again until August.

Washington tied Orlando, 1-1, on June 6. Ashley Hatch scored her third goal of the season for the Pride’s lone score.