Skip to content
June 20, 2021/Comments Off on Charge teen with gun crime 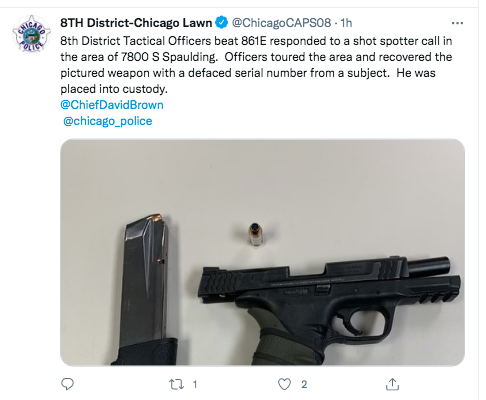 A photo of the weapon, tweeted by police.

A 17-year-old boy was charged with aggravated unlawful use of a weapon and illegal possession of a firearm with a defaced serial number, after he was arrested in the 7700 block of South Homan at about 8 p.m. Tuesday, June 15.

The teen was apprehended by officers responding to a ShotSpotter alert, as well as an earlier “suspicious person” call.

Police said the teen’s “actions were indicative of concealing a firearm” and that a pat down revealed a handgun.

The teen was due in Juvenile Court the following day.

Police tweeted a photo of the confiscated weapon.