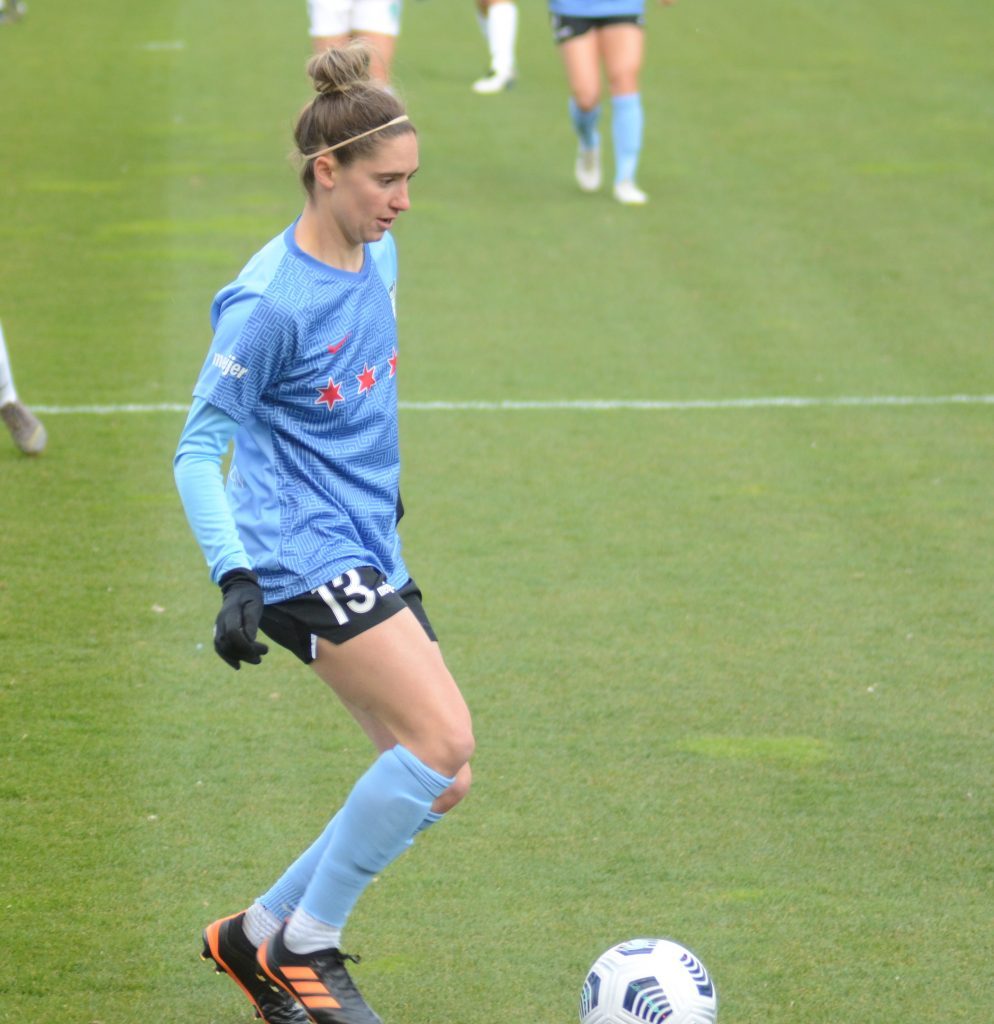 When she was growing up, Morgan Gautraut was nicknamed “Plankton.”

“I was the smallest player on the field, so one of my friends came up with the nickname Plankton from [‘Spongebob Squarepants],” she was quoted as saying in an adidas.com article in 2016. “I don’t think about how small I am. It just motivates me to want to prove people wrong – especially when they say I’m too small.”

The Plankton character is the cartoon’s antagonist, and is perpetually scheming to obtain the secret formula to Mr. Krabs’ Krabby Patties.

The 5-foot-7 Gautraut, who is better known by her maiden name of Brian, is no longer the shortest on the field and found the formula to score as she came up huge goal for the Chicago Red Stars on June 19. Her penalty kick in stoppage time allowed the team to salvage a 1-1 draw against Washington in front of an announced crowd of 3,296 at SeatGeek Stadium.

“I don’t know if we have someone designated who takes penalty kicks,” Gautraut said. “I took a few during the preseason. A few girls looked at me and I took the ball and went with it.”

The game was a chess match for 85 minutes before Washington’s Trinity Rodman won a one-on-one attempt over Alyssa Naeher.

In the 92nd minute, Gautraut hit paydirt on the penalty kick and Washington fell to 2-1-3.

“We struggled in the first half and I was disappointed that the player weren’t brave enough in some aspects,” said Red Stars coach Rory Dames, whose team was 2-2-2 after the game. “We had a good response in the second half. We’re still a work in progress but we were not up to par with our last four games.”

Seeing red
Dames has had choice words about the officiating earlier in the season, and one of his assistants was given a yellow card in the 87th minute on Saturday.

“One of their players 40 yards behind the play went on about a 10-yard run and threw one of our players off the field right in front of the fourth official,” Dames said. “Listen, I don’t want to see anybody get sent off in the league, but it’s a straight red card. It’s the easiest call. Not only did the fourth official not tell the referee what happened, she called the referee over to give a yellow card to one of our coaches.”

Dames said all the team can do it make a video clip of the play and send it in to the league and follow the procedures.

Bianca back
Canadian National Team member Briana St. Georges made her 2021 debut for the Red Stars, coming into Saturday’s match in the 64th minute. She had 15 passes and one interception.

“She has a long way to go to get back into form,” Dames said. “She has not played with us since the Challenge Cup and the more playing time she gets, the better she is going to get.”

Joy for Juneteenth
Red Stars defender Sarah Gorden said she was “super grateful” to play on June 19, which is called Juneteenth and is now a state and federal holiday.

“A lot of us people of color learned about it recently, too,” she said. “I got to go out and do what I love and it’s special to me to be able to play on a day like today.”

Coming up
The Red Stars will finish a three-games-in-eight-days stretch after 13 days off with a 1 p.m. home battle against Racing Louisville on June 26. The Stars were scheduled to visit the OL Reign in Seattle on June 22.

Louisville improved to 2-2-1 after beating the Houston Dash, 1-0 on Sunday when Ebony Salmon scored her first career NWSL goal in the 70th minute. Like the Red Stars, Louisville had a Tuesday game and hosted North Carolina.

Fire back for a match?
The Chicago Fire, who used to call Toyota Park/SeatGeek Stadium home until bolting for Soldier Field in 2020, have a conflict at its new digs with the Bears.

A Sept. 29 match against New York City FC will be played at an alternate site but additional details are not available.

There is speculation that SeatGeek Stadium could be a good alternate location since the Fire played there from 2006-2009, before opting out and reportedly paying Bridgeview $65.5 million to break the lease.