Skip to content
June 22, 2021/Comments Off on Patriot’s Day Parade coming to Archer 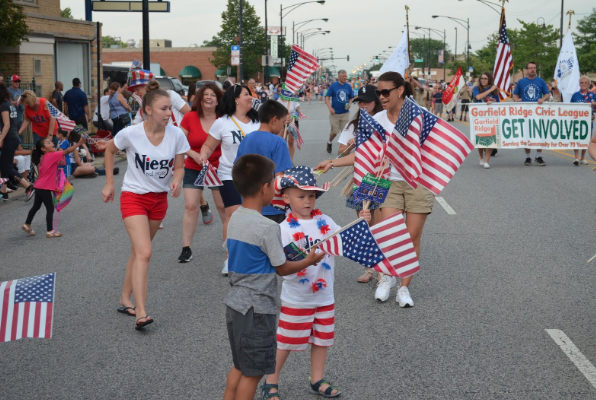 Will be smaller, ‘more Southwest Side’

With permit delays from City Hall behind, the annual Patriot’s Day Parade is moving forward for its annual run down Archer Avenue.

“We’ve been told by [23rd Ward} Ald. Silvana Tabares that we have the green light [from the Lightfoot Administration],” said Mary Ellen Brown, president of the Garfield Ridge Chamber of Commerce, the organization sponsoring the parade. “This is an exciting time, and we have to move quickly to pull it all together, and we will.”

The parade, a neighborhood favorite that attracts several thousand people, is set for the evening of Thursday, July 1. Plans call for its usual route, stepping off at 7 p.m. (rain or shine) near Archer and Lotus and heading west down Archer to Merrimac, where it will turn south and end at Wentworth Park.

There will be no after-parade party in Wentworth Park this year, since the Park District has rescheduled it Movies in the Parks date for Wentworth.

Founded in 1969 by then-Park District supervisor (and later Alderman and Congressman) William O. Lipinski, the parade was one of a handful of ways Lipinski—fiercely patriotic–promoted love of country among his constituents. When he was succeeded by his son, Daniel, in Congress in 2005, the younger Lipinski took the reins of the parade and kept it moving forward.

The pandemic caused the parade’s cancellation in 2020; and with Lipinski’s re-election defeat last November, the event was an orphan until the GRCC picked it up.

“This parade is important to Garfield Ridge—and really, the entire Southwest Side and nearby suburbs,” Brown added. “Most city neighborhoods and suburban towns don’t have a Fourth of July parade. We do, and we’re pleased to welcome them to ours.”

Under Lipinski’s leadership, the parade included units from across the district—some nowhere near the Southwest Side—like Lockport firefighters and a marching band from Proviso East High School.

This year will be different.

“No one is excluded, but I expect the parade this year will be smaller and have more of a local feel,” Brown said.

What that means, exactly, remains to be seen. But the GRCC anticipates that its members (which includes businesses beyond Garfield Ridge, including east of the airport) will have a strong presence, as will local schools, churches, civic associations, neighborhood watch groups, veterans posts, Scout troops, Little Leagues, elected officials and more.

“I think one thing we’ll have plenty of is people at the curbs, cheering on the parade,” said GRCC board member Al Cacciottolo. “People are sick of this pandemic and are looking for a safe, fun reason to get out of the house and start seeing and talking with their neighbors again. Thanks to the members of the Chamber, this parade should be that safe, fun reason, assuming the weather cooperates.”

Individuals and organizations that want to participate in the parade should visit garfieldridgecc.com/event-4375571/Registration and complete an application, returning it promptly but by Wednesday, June 30. The GRCC has decided not to charge an entry fee to anyone participating.