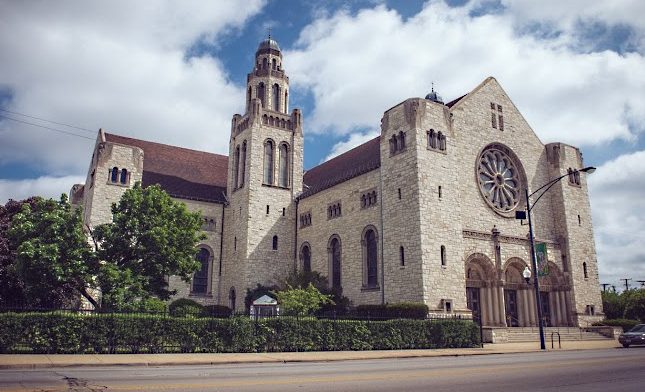 I’d like to start this week with a big shout out to Luis and Miriam Espinosa, the A/V engineering team that has been faithfully working their technical magic at St. Rita Parish for the last 15 months.

Thanks to the Espinosas, people all over the world are watching the 10:30 a.m. Sunday Mass being live-streamed from St. Rita. They continue to do so and are also responsible for all of the behind-the-scenes technology that enables events like the St. Rita monthly Novena and recent priestly ordinations to be live-streamed as well.

Congratulations to their daughter, Angelica, on her graduation from Hubbard High School. Over the last couple of years, it has become popular to have something written on the top of your mortarboard. For instance, some I have seen were “Next stop grad school!” “Thanks Mom!” and “I’m done!”

Angelica gives us a bit of an insight to her parents with what she chose to write on hers: “For my parents that came without anything and they gave me everything.”

Congrats to the whole family.

Best wishes to George Vescovi as he retires from a position he has held for several years, that of Commander at Clearing American Legion Post 600. Congratulations to the new commander, Bob Rucinski, and to newly elected officers Al Cadena, Sr. Vice; Rick Chiarella Jr. Vice; Carol Nagielski, Finance Officer; and Ron Kalat Sgt of Arms. Usually the swearing-in ceremony is held at the Post’s annual Red, White and Blue dinner (which I have been invited to in the past); but due to the pandemic, they were sworn in at the July 1 monthly meeting.

Due to the healthy dose of rain we received last week, the annual Senior Amateur Golf Championship at Marquette Park has been postponed. The new date has not been made official but will be announced in the coming weeks.

Thanks to all of the rain lately, some who would have been forced to cancel their parties and celebrations, were able to book the Monarca Event Room, 3300 W. 63rd St. If you find yourself needing a nice air-conditioned space to rent–which includes tables and chairs, green grassy backdrop and the option to decorate the day before–call Jeanette at (773) 701-5000.

Speaking of Monarca, the next Small Business weekend will be Saturday and Sunday, July 10 and 11 from 1 to 7 p.m. This month’s event is named Summer Luau and will feature more than 20 vendors, food and raffles. Admission is free.

If you would like to become a vendor and showcase your wares during one of these events, you can sign up at forms.gle/inywpyBKSCZimRjAB or call the number above.

Now let’s go back 35 years to 1986. When we left last week, we had a taste for some good Lithuanian cuisine. We decided to go to Marius and Emilia Kiela’s place at 2632 W. 71st St. Marilyn M. knew right away we were going to Neringa. She was followed closely by Tom B., who tells us in the 1960s his father-in-law had a trucking company at 74th and Bell and went to Neringa on a regular basis for lunch because he loved the soup.

Let’s try another Lithuanian restaurant. Marilyn gave us another idea. This one was on 69th and Western, and her dad really liked the soup here. Marilyn tells us the name means by the window. What do you think?