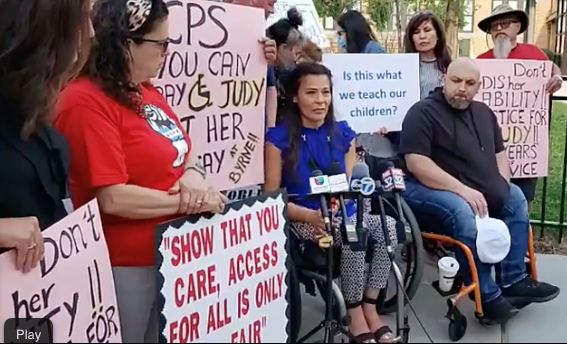 Judy Mahoney speaks to supporters and members of the press outside Byrne Elementary School several weeks ago. --Screenshot from a CTU video

Safe for another year, but…

Judy Mahoney has her job for another school year.

That was the news recently as Chicago Public Schools officials did an abrupt about-face regarding the clerk at Byrne School. 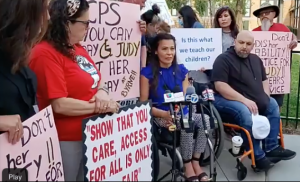 Judy Mahoney speaks to supporters and members of the press outside Byrne Elementary School several weeks ago. –Screenshot from a CTU video

The CPS reversal came in the face of pressure from Mahoney’s colleagues, Byrne students and parents, the Chicago Teachers Union and news organizations.

Previously, CPS human resources officials had told Mahoney that her position at Byrne was being eliminated this month, and that she would have to apply for other positions at other schools.

“It’s welcome news,” Mahoney told the Clear-Ridge Reporter & NewsHound. “No doubt, I’ve been feeling the love [from supporters], and I’m grateful for it.”

Mahoney was born in Mexico and brought to the U.S. at age 10, in 1981. She grew up in Back of the Yards, attending several grade schools there and then in 1989 graduating from Curie High School.

In 1993 she was hired by CPS and worked for 23 years at Whittier Elementary School, near 23rd and Damen.

In May 2017, she was riding in a vehicle struck head-on by a drunk driver with no insurance.

She suffered a spinal cord injury and was paralyzed from the waist down. She was off work for eight months as she underwent hospitalization and then grueling rehabilitation work.

“I had to re-learn everything,” Mahoney recalls. “I was like a baby. I even had to learn to sit up.”

But she persevered, thanks in part to the support and encouragement she received from her husband, three daughters and eight sisters; and though now in a wheelchair (most likely for the rest of her life), Judy was ready to return to work at CPS.

But three decades after passage of the Americans With Disabilities Act, many CPS schools remain inaccessible to people who use wheelchairs.

Whittier’s building, more than 100 years old, is one of them. It has never been retrofitted with an elevator.

Mahoney filed her paperwork to come back to work, but said she had to endure a months-long runaround that left her emotionally exhausted, with CPS officials allegedly dragging their feet in finding her a spot in a wheelchair-accessible school.

In 2018, she landed a position at Byrne and has worked there ever since.

Supporters say her bilingual skills are a plus for the school, as is her disability—if only because Judy serves as an everyday reminder to Byrne students that people with disabilities can and do function as equals in the real world, and must be treated as such. In multiple ways, she’s a role model for the boys and girls at Byrne.

“This was a Band-Aid solution [by CPS officials]. In the back of my mind, I know the clock is ticking, and I’ll probably have to go through this all over again in a year,” she said, adding that CPS HR will send her a list of schools to apply for jobs at. Some of those schools will be inaccessible to people who use wheelchairs, which Mahoney calls insulting and unnecessarily stressful.

CPS has sharply criticized Mayor Lori Lightfoot and CPS leaders for their handling of Mahoney’s case, as well as this month’s layoff of 443 special education teachers, school clerks, bilingual teacher assistants and other educators this month — even as CPS expects $2 billion in federal COVID funds to prevent layoffs and cuts and instead support student needs.