Skip to content
June 27, 2021/Comments Off on Lyons grads aim to reel in a national championship 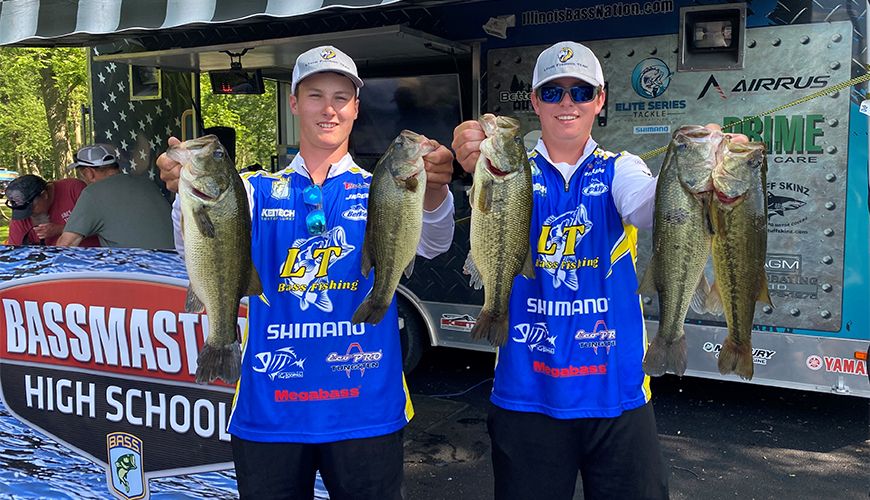 Lyons grads aim to reel in a national championship

Jacob Muth, of Western Springs, and William Hadraba, of Willow Springs, placed second in the Illinois Bass Nation state championship on the Des Plaines and Kankakee rivers June 5 and 6.

Their two-day tally of 21.8 pounds earned them a chance to be best in the nation.

Hosted by FishDayton.com, the 2021 Mossy Oak Fishing Bassmaster High School National Championship will be held on Lake Chickamauga in Dayton, TN, on July 29-31.

“I’ve been fishing pretty much since I could walk,” Muth said. “But this is all pretty new to me. I hadn’t touched a bass fishing boat until about a year ago.”

The chemistry of fishing with Muth is what works, Hadraba said:

“We complement each other. Each is doing something different, trying to figure it out.”

Fishing is a high school sport in Illinois, and bass fishing competitions “have grown like crazy” in recent years, Muth said.

“The numbers have gone from averaging 20 (boats) in a tournament to a state final that had 50,” he said.

The fishermen, with Hadraba’s father Bradley driving the boat, were on the Des Plaines and Kankakee rivers two straight days.

“About 20 miles was in play,” Muth said. “It’s a lot of water. The vast majority of water in a river, there’s no fish. …There’s probably four spots in the entire 20-mile stretch that you can win a tournament off of.”

The two have been fishing together for about a year with a bass fishing club based in Minooka, Muth said, and are familiar with the waters.
Familiarity aside, those who don’t fish may not understand how much hard work goes into it, he said.

“And you’re not guaranteed anything,” Muth said.

“You have to find the right bait, you have to be fishing in the right place at the right time with the right presentation,” Muth said. “There’s a lot of stuff in play. When you put it all together, which we did at the state tournament, it’s super rewarding.”

Besides catching fish, Muth also enjoys learning something new about fishing each time he’s out on the water.

“The time of day, season, air pressure, water clarity, everything has massive impact,” he said. “There’s so much at play and you’re up against 32 other boats.”

Fishing attracts Muth because he finds that her learns something each time he is on the water. The same goes for Hadraba.

Hadraba said he and Muth had a plan in mind and knew where to go to find fish.

The first three spots they knew were good were occupied by other fishermen. Fortunately, they had great success at the fourth spot they visited, Hadraba said.

“We caught five or six off that one bank. We had 12 something (pounds) that (first) day,” Hadraba said.

On the second day, with time running out in the contest, they managed to find another hot spot.

“We had a little over an hour,” Hadraba said. “I hit the exact same spot where Jacob caught his first fish (of the weekend). For some reason, I knew a fish would be there. Twitch, twitch. He comes out of the water. ‘Oh, yeah, here we go’.”

Hadraba reeled the fish in just 30 minutes before the deadline.

He’s already busy researching Lake Chickamauga. He and Muth may try to fish there before July 1, which is allowed in the rules. After that, they can’t fish in the lake until July 27, two days before nationals begin.

More than 200 teams will be competing, Hadraba said.

Like Muth, Hadraba has been fishing since he was a young boy. It’s something he expects to do for many years.

“it’s the challenge,” he said. “It’s the puzzle that you’re never going to figure out. And, it’s the satisfaction (of catching fish).”

Muth credited Bradley Hadraba, an accomplished bass fisherman himself, with driving the boat while dispensing words of wisdom while braving all kinds of weather.

“He keeps me in check,” Hadraba said of his dad. “If I’m married to a bait, he’ll say ‘What are you doing? You haven’t caught anything with that.’ “