June 27, 2021/Comments Off on Red Stars slip and slide in loss to Louisville 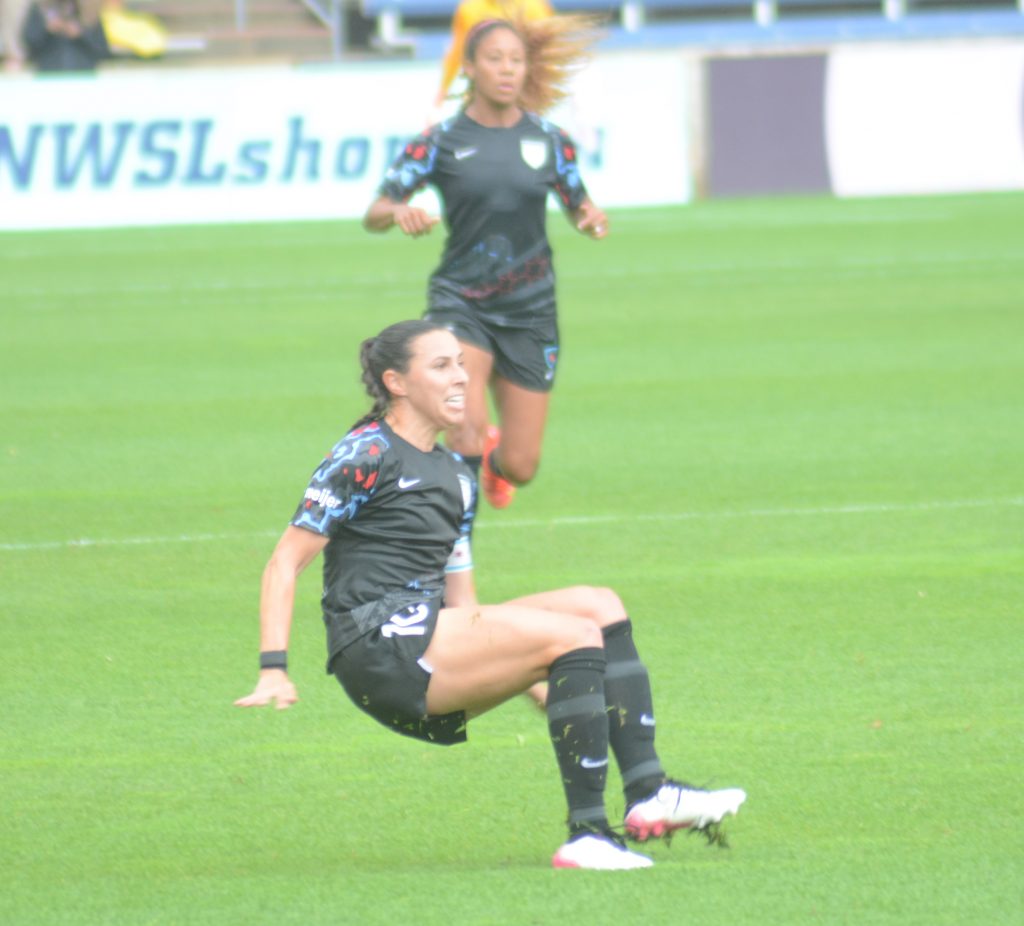 Vanessa DiBernardo of the Red Stars slips on the wet SeatGeek Sradium grass in Saturday’s 3-0 loss against Racing Louisville. Photo by Jeff Vorva

Red Stars slip and slide in loss to Louisville

Last October, the Chicago Red Stars traded Savannah McCaskill and Yuko Nagasato to Racing Louisville FC for the right to protect the rest of its roster in the expansion draft.

On June 26, the two ex-Red Stars came up huge in expansion team Louisville’s 3-0 victory at rain-soaked SeatGeek Stadium in Bridgeview.

Ebony Salmon scored in the 38th minute for Louisville (3-1-3), and after Chicago’s Danielle Colaprico was given a red card in the 55th minute, the Red Stars faced an 11-on-10 situation the rest of the game.

“It was bittersweet seeing them, obviously,” the Stars’ Vanessa DiBernardo said. “They have a lot of [history] here. It was nice to see them but a little hard to have them score on us.”

The last time the Stars lost a regular-season NWSL game in Bridgeview was a 2-1 setback to Orlando on Aug. 21, 2019.

Stars coach Rory Dames’ team fell to 2-4-2 and entering this week was in eighth place in the 10-team league. The top six team make the playoffs.

He called the ex-Stars’ goals “poetic justice,” and he was not happy his team lost to an expansion team in their first meeting.

“For sure, it’s my most disappointing loss with the club,” he said. “Where do we go from here? I don’t think it’s a secret that we don’t have an out-and-out goal scorer.

“We’ll continue to search for one. In the meantime, we have to work with the players we have and try to build our confidence around the goal.”

The Stars have five goals in eight matches, and no player has scored more than once. 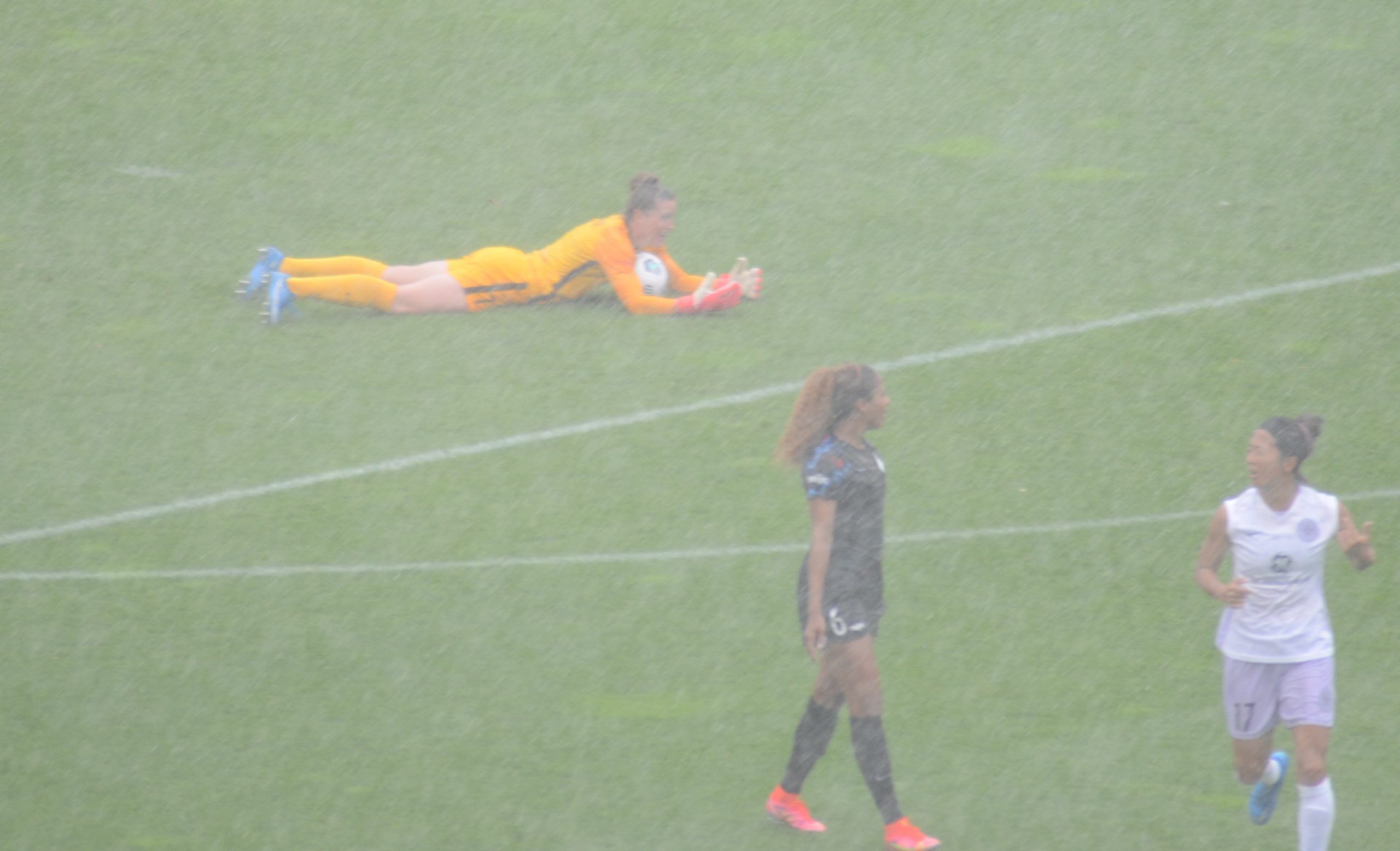 Red Stars goalie Alyssa Naeher makes a stop during a downpour on Saturday in Bridgeview. Photo by Jeff Vorva

Weather woes
Because of thunderstorms and tornado warnings, the game started nearly 2½ hours late. During the game there were on-and-off downpours and footing was not easy to come by.

“There were monsoons at times,” Stars defender Casey Krueger said. “But there are no excuses. Both teams had to play in it.”

Westward woes
The Stars fell to OL Reign, 2-0, on June 22 in Seattle, marking their second loss in as many trips out west.

The Stars opened the season with a 5-0 loss at Portland on May 16. In that match they allowed a goal in the fourth minute.

The Reign scored in the first minute on Shirley Cruz’s outside shot, then added another in the 18th minute on Bethany Balcer’s header.

Nikki Stanton returned to the Stars after playing overseas in 2020 and played the entire game. She had 45 touches.

The Stars have just one more trip out west, an Oct. 10 matchup in Seattle against the Reign.

Olympians
Stars Tierna Davidson, Julie Ertz and Alyssa Naeher were named to the United States Women’s National Team for the upcoming Summer Olympics in Tokyo. Krueger was named an alternate.

In 71 career appearances, Naeher has 42 clean sheets with the United States. She was in net against France and Sweden during the squad’s victories over both teams in the 2019 FIFA Women’s World Cup.

Davidson, 22, has 32 international appearances in which she has recorded one goal and five assists.

Ertz, who has been nursing a knee injury, has 110 appearances with 20 goals and four assists. She was honored as 2019 U.S. Soccer Female Player of the Year.
.
Krueger has 34 appearances and three assists with the United States squad.

“I had a lot of emotions when I found out,” she said. “I was in a bit of a shock. Having this opportunity is absolutely incredible and I cannot wait.”

What a list
Players who played for the Stars and have excelled in international competition — including the Olympics — include Megan Rapinoe, Carli Lloyd, Kate Markgraf (Sobrero), Lindsay Tarpley, Lori Chalupny, Christen Press and Shannon Boxx.

The Stars have their first rematch of the year when they visit Washington (3-1-3) July 2.

The teams battled to a 1-1 standoff in Bridgeview on June 19, with both goals coming in the late stages of the game. Washington’s Trinity Rodman score in the 86th minute and Chicago’s Morgan Gautraut countered in extra time. 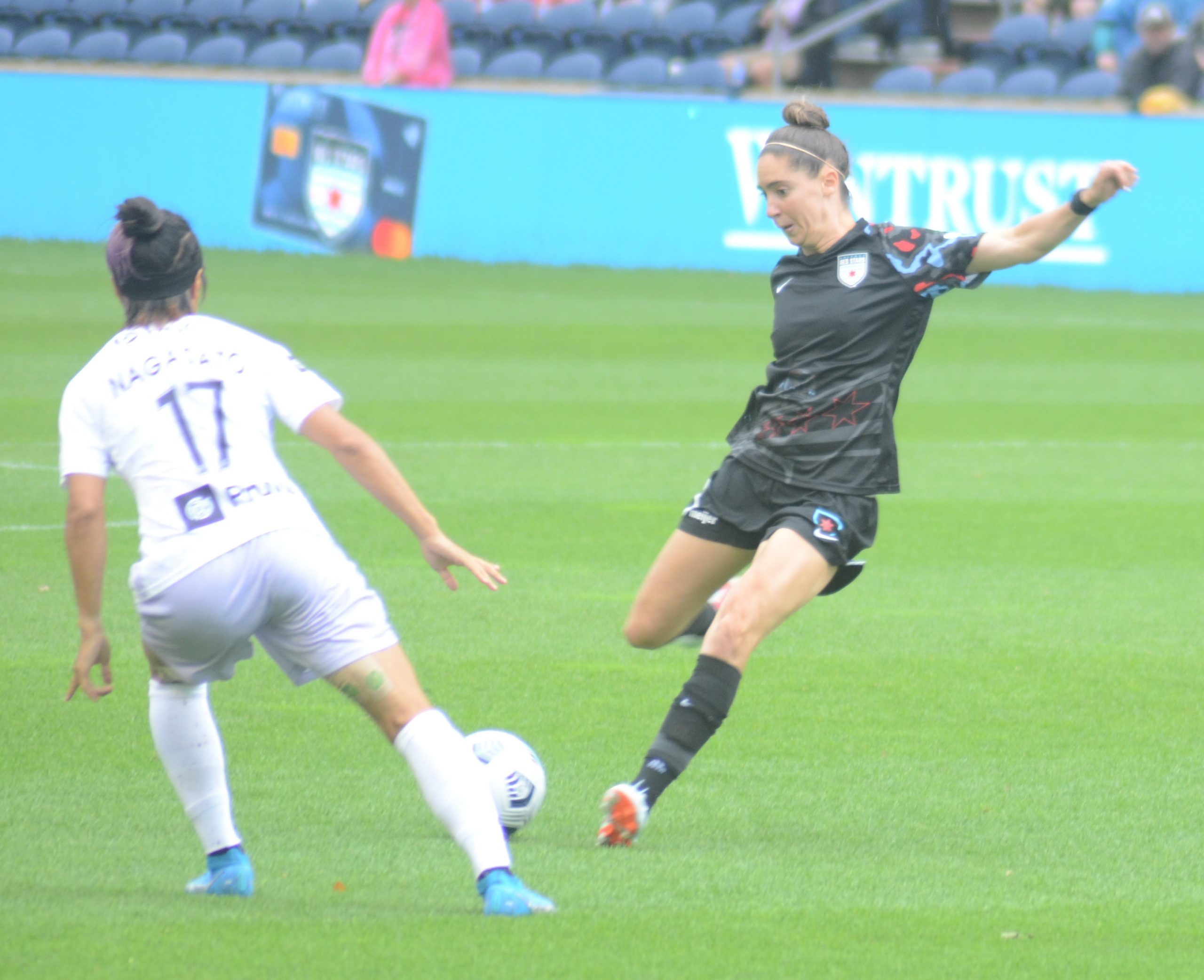 Morgan Gautraut of the Red Stars tries to advance the ball past former Red Star Yuki Nagasato on Saturday. Nagasato scored a goal in Racing Louisville’s 3-0 victory in Bridgeview.