Skip to content
July 6, 2021/Comments Off on Aldermen call special meeting about crime 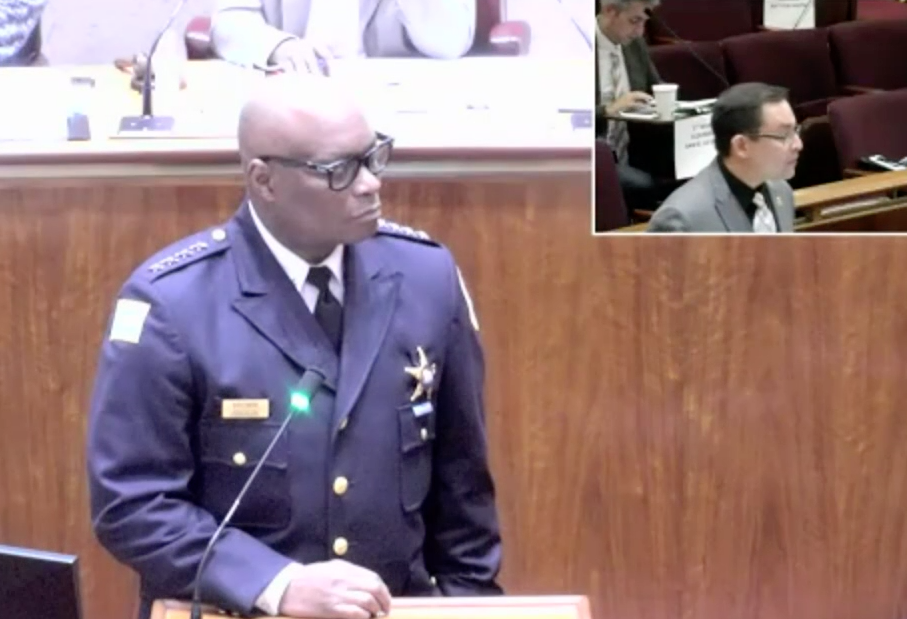 Police Supt. David Brown listens as 15th Ward Ald. Raymond Lopez (inset) objects to Brown implying that aldermen will be to blame if anyone is injured or dies as a result of gang violence that occurs in the hours after a gang shooting on July 1. --Screenshot from a City of Chicago livestream

Local alderman staged a rare revolt last week against Mayor Lori Lightfoot, who continues to insist that her administration is on top of crime in Chicago.

Led by 15th Ward Ald. Raymond Lopez, nearly half of the City Council’s 50 members called for a special meeting on July 2 to hear from Police Supt. David Brown about his plans to ensure public safety this summer across the city.

At the meeting, Brown was feisty and disputed Lopez’s assertion that Chicago has become a city of “war zones.”

Brown was flanked by members of his CPD command staff, most notably First Deputy Supt. Eric Carter and Chief of Patrol Brian McDermott.

The successful call for a special meeting was seen by some as a rebuke of the Lightfoot Administration, at least regarding public safety.

The meeting began on a confrontational note, with Brown claiming the meeting was cutting into valuable CPD time that could be used to plan the department’s response to recent gang shootings. He went so far as to imply that if anyone is injured or killed in any retaliatory gang shootings, aldermen would be at least in part to blame.

“How dare you try to use that on us,” the alderman said. “You are here because there is a crisis in our neighborhoods that has not been answered to the liking of our residents. We know the violence that’s in our streets. We know what happens—and to say that entire department cannot function because the three of you are here is outrageous. It’s insulting.

“Yesterday, we had over a dozen people shot—three children, one of my neighbors shot right in front of my house, checked by gang members,” Lopez continued. “We know, and live it every single day. And if you have time for press conferences, you have to meet with us, too.”

Lopez also said Chicago “has gone from being a city of neighborhoods to a city of war zones,” an assertion echoed by several other aldermen in various way over the meeting which lasted about six hours. A number of aldermen used their allotted time to complain about what they said was a strategy by Brown to drain resources away from neighborhoods to ensure that the Loop and specifically the Mag Mile were flooded with police.

Most aldermen who spoke praised police on the front lines and expressed concern for their mental wellbeing, especially when vacations and other days off are canceled in favor of mandatory 12-hour shifts.

Some of those praising police are the same aldermen who have publicly agreed with calls to defund the police. Whether their July 2 statements reflect a change of mind or simply political posturing remains to be seen.

Brown echoed Lightfoot’s statements when he blamed much of crime in Chicago on Cook County State’s Attorney Kim Foxx and Cook County Circuit Court Presiding Judge Timothy Evans—although he did not call out either one by name. He implied Foxx is soft on crime and that Evans has failed to re-open courts as quickly as he should.

In the end, the meeting acquired something of a conciliatory tone, with Brown and the aldermen pledging to work together to find solutions to crime in the city.

‘Somebody has to lead’

Lightfoot had described the meeting as little more than a political stunt designed to embarrass her, and she accused Burke of orchestrating it through Lopez.

City residents outside the Jewel-Osco at 54th and Pulaski saw it differently.

“Look, crime is out of control in most of the city,” said Eliseo Magallanes. “Somebody has to lead, because the mayor sure ain’t getting the job done. I don’t care who was behind this [special meeting]. I’m just encouraged to see some aldermen standing up to the mayor, finally.”

Beatris Rangel said she is “so disappointed in Mayor Lightfoot. I voted for her and had such high hopes for her as the first woman of color to be in charge in this city. But all that hope disappeared after seeing how she let criminals, rioters and looters run free last year. She comes across as someone in over her head, someone with no idea what to do about crime, so she starts blaming everyone but herself. We need someone new as mayor, and I hope someone new, someone strong steps forward in 2023—like Ray Lopez or Silvana Tabares or someone like that.”

Juan Quintana said he is displeased “with just about everyone in power in this city. The mayor and her police chief abuse the police on the front lines, throwing them under the bus. Kim Foxx is clearly on the side of criminals. Most of these aldermen are cowards…no backbones, useless. The news media goes along with it all because they are afraid of calling out the gangs. In this city, we have a situation that is approaching chaos. Hopefully out of that, a strong leader will emerge. I don’t see it yet, but I hope it happens.”