Skip to content
July 6, 2021/Comments Off on Minus Olympians, Red Stars top Washington 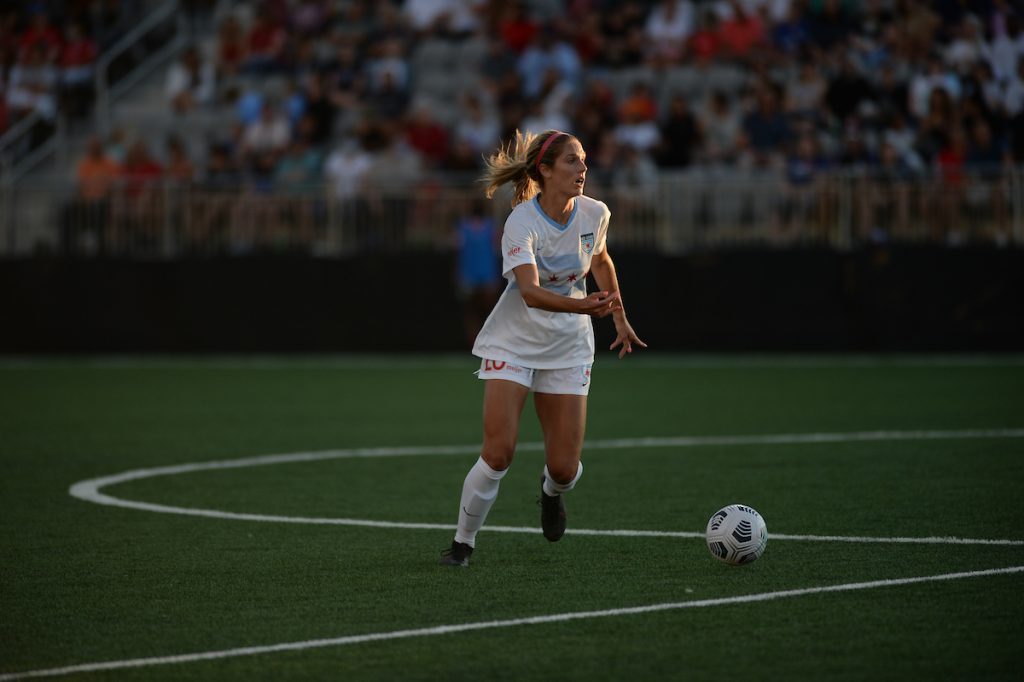 Kayla Sharples was a key in the Red Stars’ lone goal in a victory over Washington on Friday night. ISI Photo

The Red Stars knocked off Washington, 1-0, in an NWSL battle on July 2 in Leesburg, Virginia.

The Stars (3-4-2) scored on an own-goal by Washington (3-2-3) in the 33rd minute. Goalie Cassie Miller recorded a shutout in Naeher’s absence and the defense was sharp, allowing Washington just one shot on goal. The Spirit had a five-match streak without a loss heading into the game.

Red Stars coach Rory Dames is expecting the top Red Stars players to be gone for five games, so the team’s depth will continue to be tested when they host Houston on July 11 and the OL Reign on July 18, when they visit North Carolina July 25 and when they host Washington on Aug. 1.

USA alternate Casey Kreuger played against the Spirit but will likely miss the next four games for Olympic duties.

They could all be back sporting gold medals on Aug. 8, when the Red Stars host Orlando.

Dames said the team is ready to tackle the challenge of playing without them.

“People choose to forget that we played all the games except the first without Julie,” Dames said. “She’s a very influential player on the team. She’s the captain. The response that we had from then since losing her in the Portland game has been very good.

“I think that the players we will use during this period are ready for it. I’m really excited for this group of players to see what they can do. Every game is a daunting task and we’re excited for.”

Miller was excited to get a victory and shutout in her first regular-season NWSL start.

“We’re here to play — every one of us on the Red Stars team is ready to go,” she said.

Finally, a little luck
Kayla Sharples’ header after a cross from Mallory Pugh went off the body of Washington’s Julia Rodder and it was ruled an own-goal against Washington, not a goal for Sharples.

Nonetheless, it was a piece of good luck in a season that has not found a lot of luck go Chicago’s way.

The Red Stars have six goals and no one on the team has more than one. They are the only team in the league without a multiple-goal scorer.

The team has had its chances but has struggled to put the ball in the net.

“We feel like we could have given up less goals and scored more.”

Big-time defense
The Stars entered the Washington game allowing the most goals in the league – 13. The defense came up huge with the shutout, and recorded several blocks before they could even get into Miller’s neighborhood.

“Our defense was a total team effort,” Dames said. “It’s hard to keep that team out of the goal.”

Up next
The Red Stars are back at home at SeatGeek Stadium at 5 p.m. Sunday against Houston (4-3-1), which beat the OL Reign, 2-0, on July 2. Jasmyne Spencer and Katie Naughton scored for the Dash.