Skip to content
July 13, 2021/Comments Off on Crime fighters to surge back 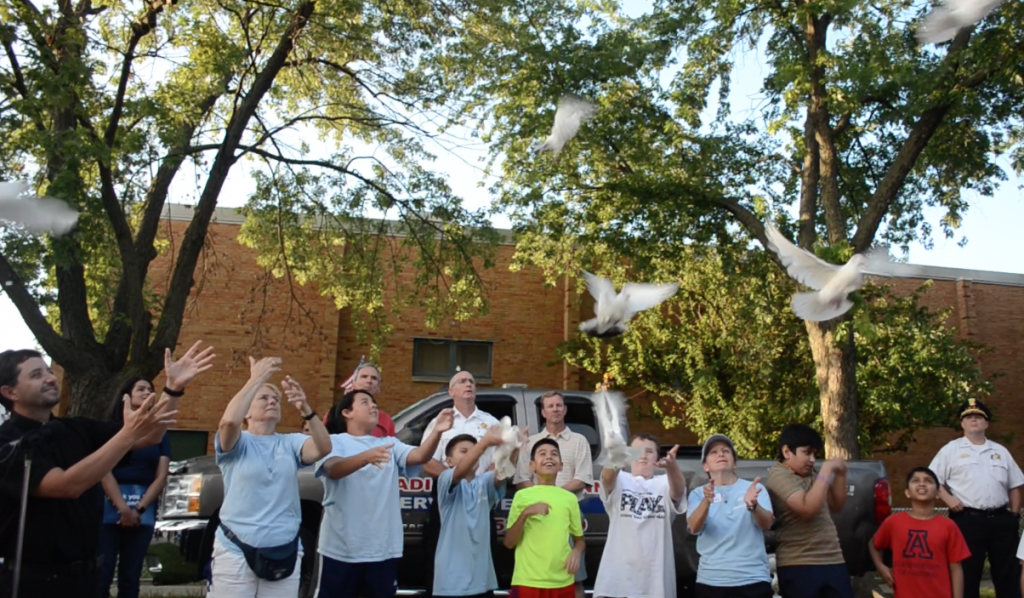 A release of doves, as depicted in this 2019 photo, is expected to be a part of the 2021 NNO event at West Lawn Park. --Greater Southwest News-Herald file photo

Crime fighters to surge back

Hundreds and perhaps more than a thousand Southwest Side men, women and children are expected to take a public stand against crime at the Chicago Lawn (8th) Police District’s annual National Night Out Against Crime celebration, set for 6 p.m. Tuesday, Aug. 3 at West Lawn Park, 4233 W. 65th St.

Year after year, it is one of Chicago’s largest and most successful NNO celebrations.

The event will include a prayer, remarks by police officials and elected representatives, a “peace parade” around the perimeter of the park at 6:30 p.m., and more. Special emphasis will be placed on thanking Chicago Police and others in law enforcement.

“At first glance, this is a big, happy gathering of people from all across the district—I’d even say it has almost a small-town Mayberry kind of feel about it,” said event founder and longtime coordinator Barb Ziegler, perhaps the most active and effective civilian crime fighter on the Southwest Side.

“But beyond the obvious fun, there’s another side to it—an important side, a side that can prevent crime and even save lives,” she continued. “It’s all about neighbors meeting neighbors—like-minded people making connections that can build stronger blocks, strong neighborhoods. It’s about learning to look out for each other, take care of each other and get actively involved in the community. That’s what we do here, year after year.”

CPD’s mounted patrol and canine units will be on hand to give demonstrations, and there will be a number of giveaways for adults and children who live in the district, while supplies last. A color TV will be raffled off; those who march are eligible to win.

Cold drinks, snow cones, popcorn and other treats will be available to keep everyone cool.

Included in the goody bags for adults is potentially lifesaving information that includes basic tips on how to make an effective 911 call, how to escape domestic violence, how to join the local CAPS effort and more.

A number of local businesses, large and small, have made contributions to the NNO at West Lawn Park, now in its 19th year. Nationally, NNO is in its 38th year.

At dusk, a movie suitable for families will be shown outside. All are welcome to bring blankets and lawn chairs.

For more information on the district-wide observance at West Lawn Park, call the CPD Eighth District CAPS Office at (312) 747-8724.

Launched in 1984, National Night Out is an annual community-building campaign that promotes police-community partnerships and neighborhood camaraderie to make neighborhoods safer, more caring places to live.

National Night Out is designed to enhance the relationship between neighbors and law enforcement while bringing back a true sense of community. It also provides a great opportunity to bring police and neighbors together under positive circumstances.

Millions of neighbors take part in National Night Out across thousands of communities from all 50 states, U.S. territories and military bases worldwide on the first Tuesday in August.