Skip to content
July 13, 2021/Comments Off on Nobody’s pawns 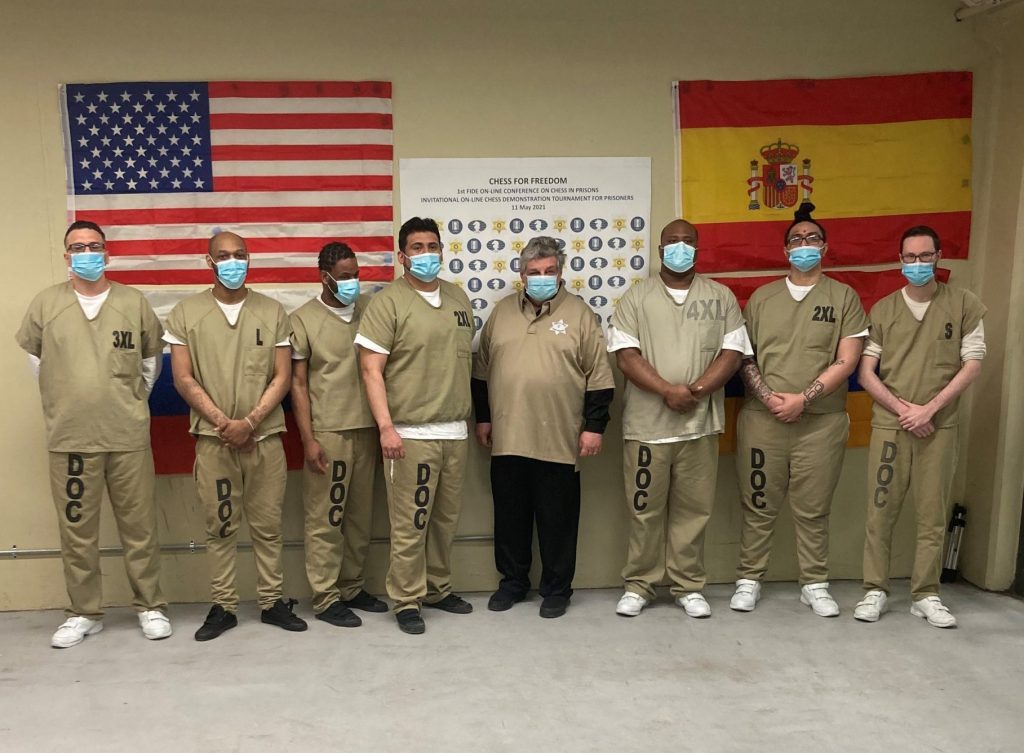 Members of the Cook County Jail Chess Team pose for a photo during the tournament. --Supplied photo

They came close to checkmating Russia and say they are looking forward to a rematch this fall.

Seven men on the Cook County Jail (CCJ) Chess Team squared off in an online battle of wits against their counterparts in correctional facilities in Russia, Spain and Armenia in May. In a round-robin, six-match tournament, they placed second, just one match win behind Russia, historically a hotbed of chess excellence.

The rematch is set for Oct. 14. Teams from six continents are expected to vie for supremacy.

The thrill of competing and winning on an international stage aside, simply learning and playing chess “has a lot of positive outcomes,” according to Dr. Mikhail Korenman, who teaches the game to CCJ detainees as they await trial on assorted criminal charges. The program at the jail was founded in 2012 and over time has involved nearly 200 men.

“[In chess], you really have to think for two people,” Korenman said. “The winner of the game is the one who understands what the opponent is trying to do.” He also noted the complexities of castling (a move when a rook is used to protect its king) involves players “making sure you are safe before you go and do other stuff. You have to take care of yourself first. And this goes beyond chess.” 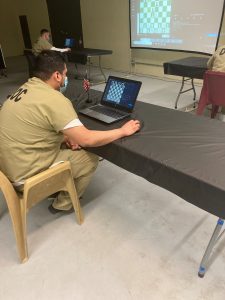 Cook County Jail Chess team member Emmanuel Garcia peers into his online screen as he ponders his next move against his opponent, who sits in a facility on the other side of the world. –Supplied photo

“Chess is more than an entertaining pastime,” Dart said. “The game teaches its players valuable life lessons. It requires these men to practice critical thinking and consider the risks and rewards of their decisions, which are valuable skills they can take with them when they return to their communities.”

There are currently 14 men on the CCJ team, which meets for an hour each week to practice. Participants in the May tournament were chosen based on skill, and four of the players previously competed in the 2019 international chess tournament held at 26th and California.

Assembled in a basement classroom at the jail early on a Tuesday morning, Korenman leads chess practice, replaying two of his team’s victories in the May tournament.

Eight team members scattered throughout the room eyed the chess board before scrutinizing thick study packets Korenman had assembled for them.

Korenman, who has worked on the program with Dart and his son, Tommy, takes an analytical approach to the game. He says winning is important for the men and their self-esteem, and that his program is indeed competitive.

But he also realizes the program is so much bigger than winning. Through the Cook County Jail program’s success, he hopes to spark similar programs at other correctional facilities.

“In America, chess in prison is not as popular or as progressive as we would like,” he said. 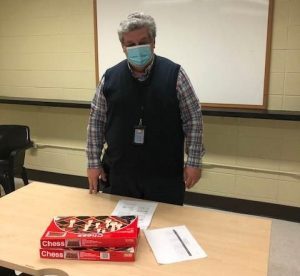 Three-year team member Irell Dickens, who defeated a player from Spain in the May 11 tournament, is enthusiastic about chess at CCJ—so much so that he is teaching his daughter the game.

“I’m really excited to talk to my daughter about life as I teach her the game,” he said. “It would make me proud.”

Emmanuel Garcia is one of the strongest players in the program. He defeated an opponent from Romania in the May tournament. He understands the connection between chess and making the right choices in life.

“To be a good player, you have to learn to not settle,” he said. “You don’t want to take the convenient move or even a good move, but instead make sure you are making the best decision at each moment. Because every decision you make–like in life–will have an impact later on.”

After making that observation, Garcia took to the chessboard against a reporter. He triumphed in just five moves.

Dart is proud of the initiative.

“The game of chess transcends language and cultural barriers, and even the physical barriers within which these men are playing,” the sheriff said. “These participants [in international correctional facility competitions] may not all speak the same language, but they were able to connect, compete and enjoy their time together. After the difficult [pandemic] year we have all had, that is incredibly important.”