Skip to content
July 31, 2021/Comments Off on Lyons native Lazich is new trustee 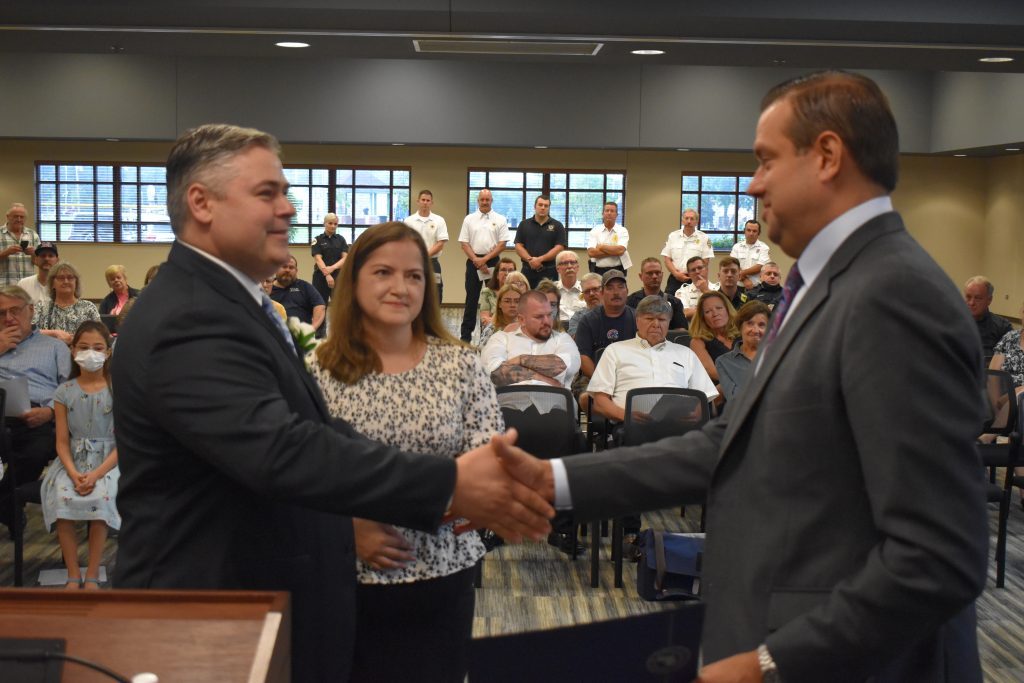 Ivica "Otis" Lazich shakes hands with Lyons Mayor Christopher Getty after he is sworn in as the village's newest trustee. His wife, Emilia Lazich, looks on. (Photo by Steve Metsch)

The new village trustee in Lyons has deep roots in the village.

Ivica “Otis” Lazich has lived in Lyons his entire 44 years, is a graduate of Robinson School, served on the public library board, and owns a business in town.

On July 20, Lazich added to his Lyons roots.

He was unanimously approved by the village board to fill the trustee spot vacated earlier this year by Modrag “Mike” Kotur, who moved out of town.

Mayor Christopher Getty, who hand-picked Lazich for the job, called him “a natural fit to be on the board. It is nice to have somebody local, born and raised, (who) knows the town very well.

“He’s always been involved in the community,” the mayor said. “He’s always happy to help, always engaged in what’s going on. He’s an individual who truly cares about the success of the community.”

Lazich has served six years on the Lyons Public Library Board. He stepped down from his role as library board president to take the trustee job.

Lazich said he was “flattered” when asked by Getty to become a trustee.

To do that, he will take his new duties “day by day.”

“(I will be) checking out things that are needed to be done,” he said. “And (I’m) coming in with a positive attitude.”

In some ways, his five years is deputy director of public works – a job he left last year when real estate began picking up – prepared him for the job of village trustee, he said.

He learned more about the community, he said, and enjoyed “being at the service of the people.”

Public Works Director Ryan Grace said Lazich’s commitment to and appreciation for Lyons and the residents “is really second to none.”

“He cares,” Grace said. “He likes to help people. He likes to be involved. He’s going to do very well in his new role.”

One thing Lazich knows a lot about in Lyons is the housing stock.

After working in insurance and the mortgage business, Lazich became a Realtor. He owns Capital Investment Realty Group that is based in Lyons with an office in Countryside.

“Real estate is my passion,” he said. “It’s just helping people out. Every day is a different day. You never know what you’re going to get.”

“You make the best of every day and it’s very busy right now,” Lazich said. “With interest rates being so low, people are able to qualify for more money.”

Lazich earned his bachelor’s degree in business administration from DePaul University in 2000.

He graduated from Nazareth Academy in La Grange Park in 1995.

He and his family live on 45th Place in a house his parents built. He and wife Emilia have five daughters, ages 5 to 16.