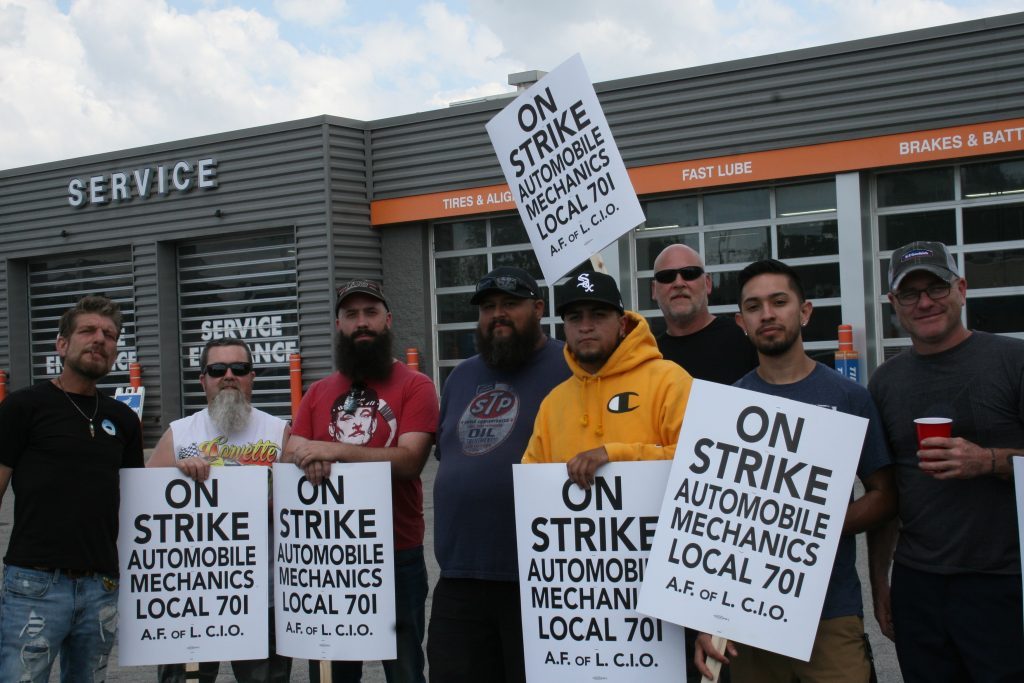 Auto mechanics (above) were on the picket line Monday morning at Hawk Ford of Oak Lawn. Members of Automobile Mechanics Local 701 walked off the job at midnight Monday. Union officials said that the group of more than 130 dealerships have refused to pay the workers a fair wage and provide a fair work schedule. More than 800 mechanics represented by the union walked off the job. (Photo by Joe Boyle)

Vehicle owners needing service at a local dealership may find it hard to make an appointment as members of Automobile Mechanics Union Local 701 went on strike Monday after talks with the New Car Dealer Committee failed to reach a new contract.

The NCDC represents more than 100 new car dealerships across the Chicago area in contract negotiations with the auto mechanics union, which represents thousands of automobile technicians at those dealerships.

The same union workers were on strike for nearly seven weeks in 2017 before both sides agreed on a four-year deal.

Talks began in June on a new contract, but workers overwhelmingly rejected the latest NCDC proposal over the weekend and voted overwhelmingly on Sunday to hit the picket lines.

Union members have agreed to a contract with about nine dealerships that split away from the NCDC during the 2017 strike.

These so-called “defector” dealerships have negotiated a separate agreement with the mechanics union.

In regards to the “defector” dealerships, the union issued this statement Sunday. “Mancari Motors Oak Lawn has joined the defector’s association and the bargaining unit voted overwhelmingly in favor of accepting the agreement. Three other dealerships are working on joining the association or have requested the defector deal today. We expect these three dealerships to join the ranks of those dealerships under an agreement no later than Monday.”

A union proposal for the NCDC to accept the terms of the “defector” contract was rejected last week.

“Overall, we think the ‘defectors’ made a bad, one-sided deal, which will hurt them and their techs in the future,” the NCDC posted on its website. “That’s what defectors do. They think about today instead of the future.

“The NCDC believes in win-win bargaining where our techs do better, our dealers do better, and both sides think about the future and compromise. Our comprehensive offer reflects that approach and it’s a shame Local 701 is putting our dealers and techs at risk of another strike because of deal they jumped the gun on with the ‘defectors.’ ”

A last-minute NCDC counter proposal was resoundingly defeated at a ratification vote Sunday by union members.

“The fact that the NCDC is forcing you to the streets (maybe against your dealership’s own preferences), is unfortunate to say the least,” the union posted on its website. “We told them at the table (and they’ve acknowledged we told them repeatedly in their communications): This will not fly; the members will strike.”

Here’s a list of area dealerships the union says are on strike:

Nissan of South Holland/Nissan on 94