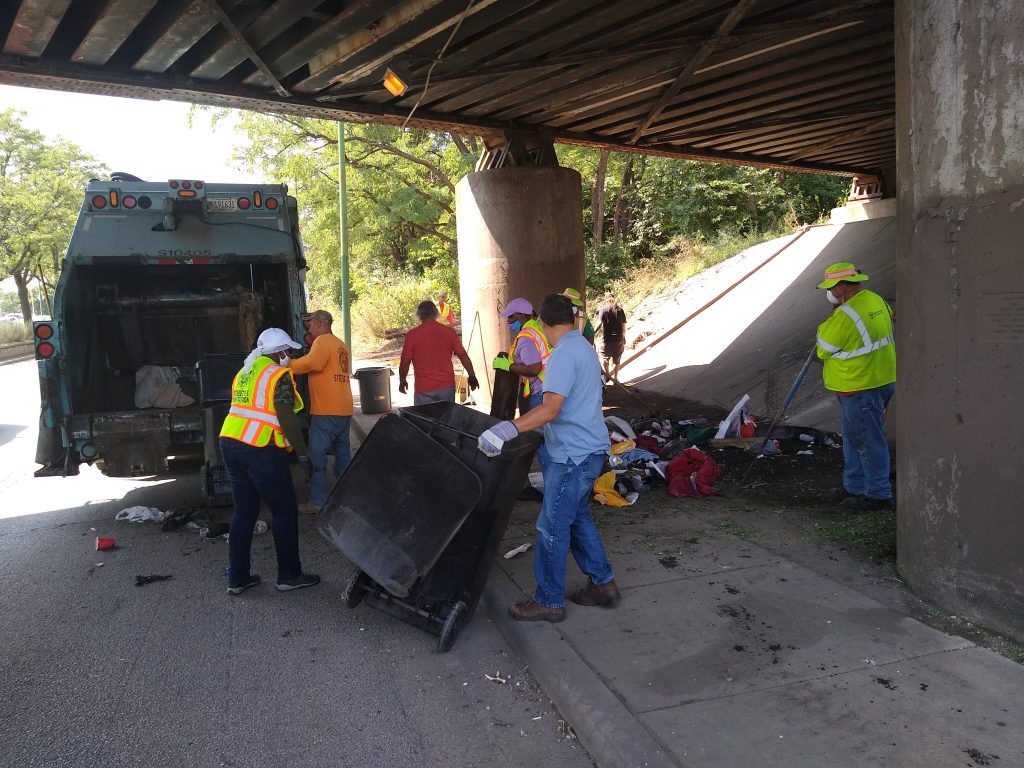 Crews from the Illinois Department of Transportation and the Chicago Department of Streets and Sanitation clean up the underside of the Stevenson Expressway overpass at Cicero Avenue. --Photo courtesy of the Archer Heights Civic Association

Crews clean I-55 overpass at Cicero

Complaints about the sloppy appearance of the underside of the Stevenson Expressway overpass at Cicero Avenue have apparently paid off.

Starting Monday, July 26 and running for five days, the Pritzker Administration dispatched Illinois Department of Transportation workers, as well as Illinois State Police, to address months and even years of neglect. 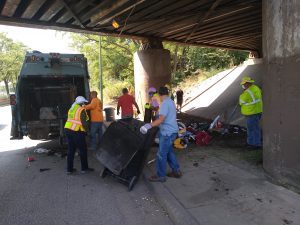 Crews from the Illinois Department of Transportation and the Chicago Department of Streets and Sanitation clean up the underside of the Stevenson Expressway overpass at Cicero Avenue. –Photo courtesy of the Archer Heights Civic Association

Litter strewn about, overgrown grass and weeds, human excrement, rats and more have characterized the area, which is seen by literally thousands of people every day: Southwest Side residents making local trips, commuters headed to and from work, as well as business travelers and tourists heading to and from Midway International Airport.

That was all but bulldozed away.

State Police shagged the dozen or so men and women who had been living on concrete ledges, as human services officials offered them housing options and services to address drug and alcohol addictions.

As crews cleared away the illegal encampment, they discarded years worth of old, filthy blankets and clothing, fast-food cups and wrappers, old beer cans and liquor bottles, hundreds of discarded needles and syringes, stolen shopping carts and even two microwave ovens used by squatters who broke into a state power source under the expressway and rigged it to their ovens.

As crews cut and removed weeds from adjacent grassy embankments along the entrance and exit ramps, they uncovered piles of rat and human excrement, rat burrows and more. They also found that storm sewers designed to prevent the ramps from flooding were clogged with years of dirt and organic debris such as old grass, leaves and animal carcasses.

IDOT crews also found that access panels on at least one street light pole had been pried open—with the cavity apparently used as an exchange point for squatters buying drugs from dealers who would pull up in their vehicles.

The turnaround was hailed by Archer Heights Civic Association President Thomas S. Baliga, who called the transformation “spectacular. Really, I don’t think this area has looked this good since the Stevenson opened [in 1964].

“Despite the scorching heat and high humidity, the IDOT crews did a yeoman’s job of cleaning up this area, and they should be commended for their outstanding efforts,” Baliga continued. “On behalf of the AHCA, I stopped by each day to both thank the laborers for their hard work and to reinforce to them how much the community appreciated their efforts. Having the Illinois State Police on hand contributed greatly to an unobstructed, peaceful cleanup.”

Various individuals from the nearby Hearst Area, Vittum Park and Archer Heights have complained about the situation in recent years; but finally making authorities address the problem appears to be recent pressure exerted by the AHCA.

The final straw for the AHCA appears to be the death of 39-year-old Crystal Gayle King, whose bloodied body was found lying on a steep concrete embankment under the overpass at 8:49 a.m. Monday, July 5.

Some in the area have speculated her death was a homicide; but a month and a day after her body was discovered, the Cook County Medical Examiner’s Office still has not yet released her cause of death.

Originally from Kokomo, Ind., King led a troubled life in recent years. According to public records, she was arrested 25 times by CPD since 2014. What she was repeatedly charged with appears to indicate a life of drug addiction fueled by cash from panhandling and prostitution.

Months before King died, Baliga publicly warned that conditions under and around the overpass were “dangerous and could get someone killed.”

After her death, he accused city and state officials of “enabling drug addiction, alcoholism, prostitution and other self-destructive behavior” by their “failure to take action.”

He also credited the Greater Southwest News-Herald “for once again being an independent, honest, clear voice here on the Southwest Side—a voice local civic groups can and should work with to make our neighborhoods better places to live. The story that appeared on the front page of the July 23 edition of the paper helped us rally our public officials to act.”

Baliga said what remains to be done is maintenance. He is calling upon state officials to install, monitor and maintain iron security fencing under the expressway overpass, as well as a nearby railroad overpass.

“All of this work will be for nothing if authorities allow squatters to move back and set up camp again,” he said. “People in need, people struggling with addictions, with hunger and more deserve to be helped, not ignored and enabled.”