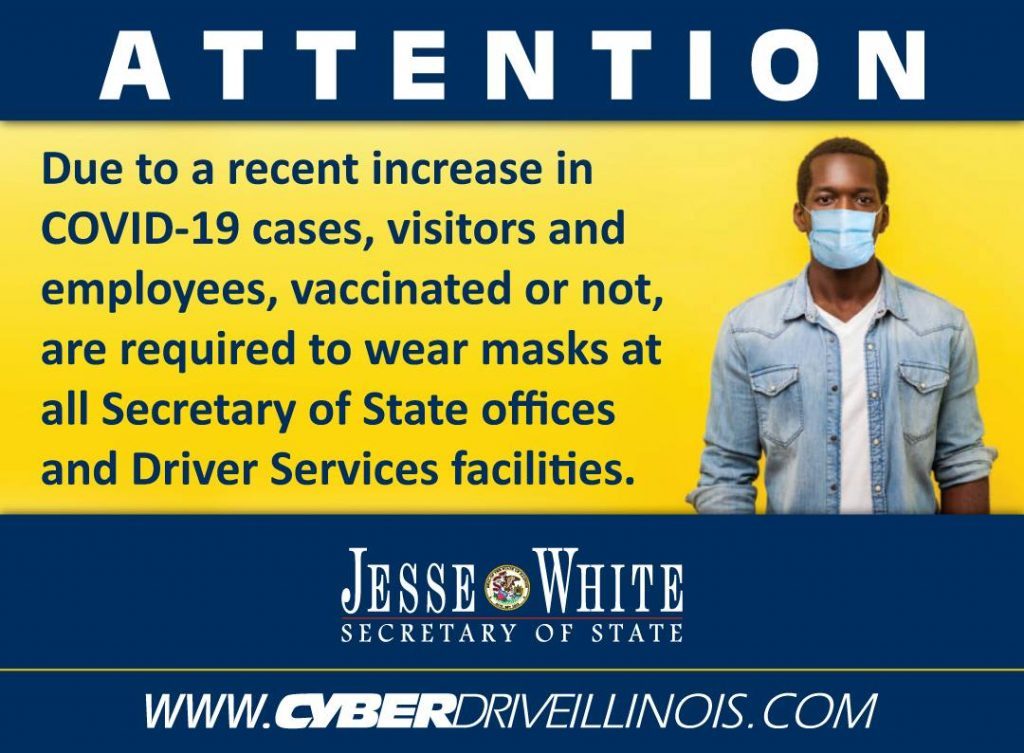 A sign posted to social media last weekend by Illinois Secretary of State Jesse White underscores the seriousness of wearing face coverings, as the pandemic surges back. --Supplied image

As the COVID-19 delta variant continues to sweep across Chicago and the rest of the state, mask mandates began to return last week, causing what appeared to be a collective groan among some on the Southwest Side.

“I was just getting used to not wearing a mask, and it felt great,” said Julio Carranza, one of several Southwest Siders weighing in via local Facebook groups last weekend. “I guess the lesson is hey, don’t toss your mask. You never know if you’ll need it again.”

Ed Gomulka said he’s willing to mask up again, “but it irks me when I see the mayor allowing things like Lollaplooza, with up to what, as many as 100,000 unmasked people a day? All breathing on each other, bumping each other, and doubtless spreading COVID-19 among each other. It’s hypocrisy, and she lost all credibility with me, as did her Health Department doctor (Allison Arwady, M.D.) who actually tried to claim [Lollapalooza] was safe. That’s a lie. You watch, it will turn out to be a super-spreader event.”

“No one likes the inconvenience of wearing a mask,” she said. “But we have to work together and be persistent until this [pandemic] is gone for good.

Masks are now required again at driver’s license facilities in Illinois, including the one in Bridgeview. 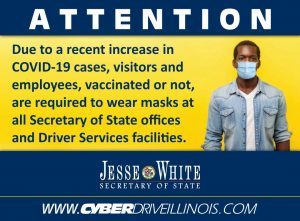 A sign posted to social media last weekend by Illinois Secretary of State Jesse White underscores the seriousness of wearing face coverings, as the pandemic surges back. –Supplied image

The new mandate kicked in Monday at the direction of Secretary of State Jesse White, who announced the decision last week.

In Springfield, Gov. JB Pritzker said he was “looking at all the possible mitigations” amid another surge of COVID-19 infections.

The secretary of state’s announcement came one day after the Illinois Department of Public Health and the U.S. Centers for Disease Control and Prevention updated guidance to recommend individuals in areas with “substantial risk” or greater for the spread of COVID-19 should wear face coverings regardless of vaccination status.

“Substantial” risk occurs when new cases are between 50 to 99 per 100,000 people over a seven-day period, while “high” risk occurs when cases exceed that amount. A CDC county map, viewable at covid.cdc.gov/covid-data-tracker/#county-view, shows much of the state’s western half along the Missouri border is at high or substantial risk, as is most of southern Illinois.

The CDC also recommended masks be worn by all individuals in K-12 schools, and IDPH announced it “fully aligns” with the federal guidance. The governor warned that districts disobeying guidance could face civil liability.

White’s new mask requirement will also apply to the Illinois State Capitol and all secretary of state offices. The announcement came as the state reported 2,082 new COVID-19 cases, the most since May 7, and the case positivity rate rose to 4 percent, the highest since April 19.

The guidance that all people in school buildings should wear face coverings comes just 18 days after the CDC released guidance saying masks were suggested only for those who had not been vaccinated.

Dr. Rochelle Walensky of the CDC said the main reason for the change in guidance is the fact that the COVID-19 delta variant – which makes up “eight in 10” of the COVID-19 cases that have had been sequenced in laboratories – is less predictable and more transmissible than previous versions of the virus. It’s also due to the fact that fewer people than expected have chosen to become vaccinated nationwide.

“When we released our school guidance on July 9, we had less delta variant in this country, we had fewer cases in this country, and importantly, we were really hopeful that we would have more people vaccinated, especially in the demographic between 12 to 17 years old,” Walensky said according to an audio recording posted to the CDC website.

She said the guidance is aimed at protecting those who cannot be vaccinated, such as children 11 years of age and younger and those who are immuno-compromised.

While Pritzker said the state has “wanted school districts to make decisions for themselves throughout the last year to keep their districts safe,” school districts face the risk of being held liable in civil courts “if they don’t live up to the standard that is set by the CDC.”

The Illinois State Board of Education echoed those comments in a statement last Wednesday.

“Illinois fully adopted the CDC’s updated guidance for K-12 schools on July 27, which recommends universal indoor masking for all teachers, staff, students, and visitors to K-12 schools, regardless of vaccination status,” an ISBE spokesperson said in an email. “School boards that choose not to implement public health guidance are putting their students and staff at risk and should consult with their insurers as to potential liability.”

Other than that, ISBE’s most recent guidance, encouraging school boards to work with local health departments on mitigations, remains in place.

Pandemic of the unvaccinated

But the vaccine is largely effective in preventing severe illness, hospitalization and death in those who receive it.

“We continue to estimate that the risk of a breakthrough infection with symptoms upon exposure to the delta variant is reduced by seven fold. The reduction is 20 fold for hospitalizations and deaths,” Walensky said.

Walensky also said a major concern as the virus continues to spread and mutate is that it eventually evolves into a “very transmissible virus that has the potential to evade our vaccine in terms of how it protects us from severe disease and death.”

While “we’re not there yet,” she said, that mutation could be as few as “two mutations away” from the current circulating variants.

As of now, 99 percent of COVID-19 deaths in Illinois are occurring in unvaccinated individuals, Pritzker has said.