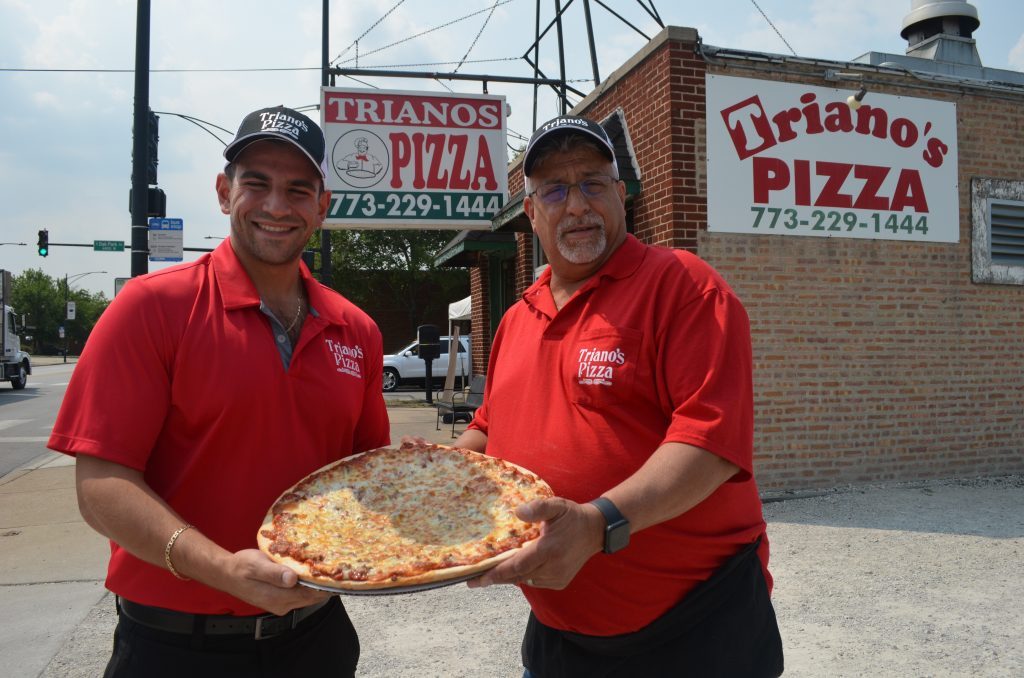 The father and son team of Bill and Anthony Triolo makes some of the best and most popular pizza in the city, as well as homemade Italian beef, a variety of sandwiches, chicken, ribs, pasta, Italian ice and more. --Photo by Cosmo Hadac

Triano’s Pizza, 6758 W. Archer, is celebrating its 37th anniversary; and through the end of August, a family cheese pizza and a two-liter bottle of soda are just $19.84.

“Archer Avenue has the best pizza on the South Side, and South Side pizza is the best in all of Chicago,” said Triano’s founder Bill Triolo. “We hope everyone will join us as we celebrate our anniversary.” 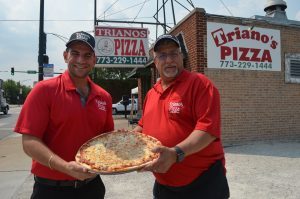 The father and son team of Bill and Anthony Triolo makes some of the best and most popular pizza in the city, as well as homemade Italian beef, a variety of sandwiches, chicken, ribs, pasta, Italian ice and more. –Photo by Cosmo Hadac

Triolo and a partner launched Triano’s in May 1984 out of a storefront at 111th and Central Park. Two years later, they added a second location at Archer and Oak Park. After many years, they sold the Mt. Greenwood location, and Triolo continued at the Archer location by himself.

It was a homecoming of sorts. Triolo grew up near 54th and Normandy, graduating from St. Daniel the Prophet School and later St. Laurence High School in 1976. As a high school teen, he worked at Geno’s Pizza, which was several blocks away from where Triano’s stands today.

In time, Bill’s son, Anthony, started to work at the pizzeria. “I was maybe 6-7 years old when I started working there,” Anthony recalled.

“As soon as he was tall enough to reach the counter,” Bill added with a chuckle.

Anthony started by weighing cheese for each pizza order that came in. Over the years, he learned every other aspect of the business.

In 2013, he earned a business degree from Illinois State University and joined Triano’s on a full-time basis. He learned all aspects of the business and has helped the business in multiple ways, including successful marketing that got Triano’s favorable notice from downtown media outlets.

When Triano’s launched in 1984, the typical pizzeria in Chicago sold pizza, pop and just about nothing else. That has changed, and Triano’s was a leader in expanding and diversifying its menu. Today, one of their most popular items is Italian beef, which they roast in-house. They also make and serve fresh chicken, ribs, pasta and more.

The Triolo family also prides itself on using fresh ingredients and a number of homemade entrees.

“We make our own pizza sauce and our own Italian sausage for the pizzas and sandwiches,” Anthony Triolo said. “A lot of places can’t say that. We use fresh mushrooms, peppers and onions, and we make everything fresh daily.”

Hungry men, women and children in the community have responded.

“Our business has quadrupled over what it once was,” Anthony Triolo said. “People want top quality, fresh, delicious food, and we serve that every day.”

Triano’s staff has grown over the years, employing many people from the neighborhood. They have maintained friendships with kids who worked for them as teenagers and are now in their 40s.

The future looks strong for Triano’s, but Bill Triolo declined to offer a forecast. “Five, 10 years from now? I don’t know. I’ll be retired,” he responded with a laugh. “Ask Anthony.”

Anthony Triolo said he hopes to expand the business at some point, as space is limited at this time.

“But that’s years in the future,” he said. “Right now, we’re going to do what we do best at Triano’s: focus on maintaining quality and keeping our customers happy. We’ve built a great business here, and we’ll keep striving to make our business the best we can in the years to come. ”