Skip to content
August 9, 2021/Comments Off on Banged up Red Stars looking for aid from Olympians 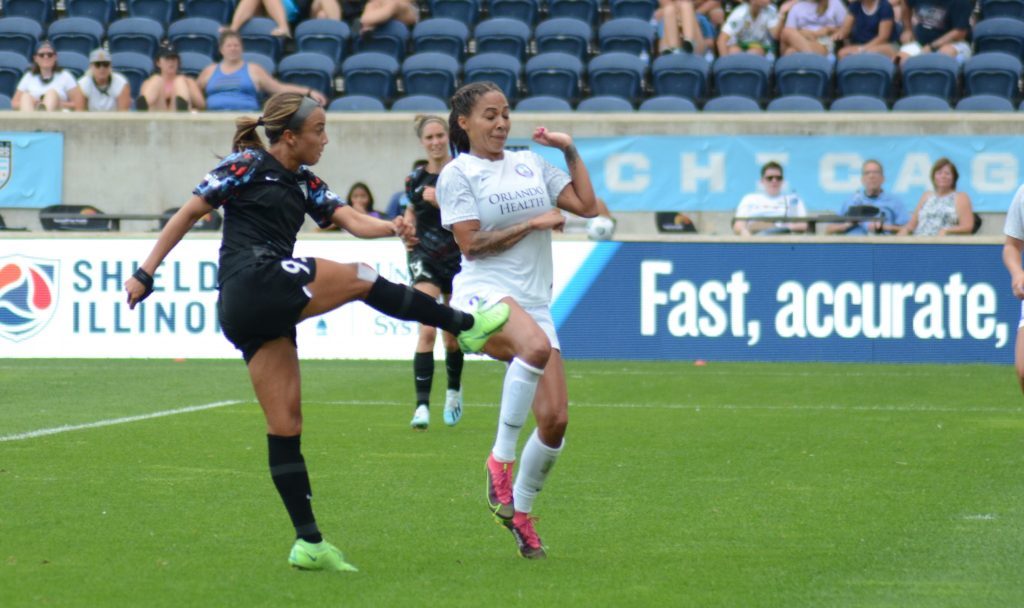 Mallory Pugh gets a shot off, but it was not accurate as the Red Stars failed to find the back of the net in Sunday’s 2-0 loss to Orlando in Bridgeview. Photo by Jeff Vorva

Banged up Red Stars looking for aid from Olympians

The Olympians can come back any time now, as far as the Chicago Red Stars are concerned.

The United States women’s soccer team brought home the bronze medal from Tokyo and four Red Stars – Julie Ertz, Tierna Davidson, Casey Krueger and goalie Alyssa Naeher — are back on American soil. Stars coach Rory Dames hopes three will be able to play Aug. 15 when the team visits North Carolina and Aug. 18 when it visits Louisville. Naeher is likely out awhile after suffering a knee injury in Japan.

Chicago is banged up, and Vanessa DiBernardo and Arin Wright couldn’t answer the bell in Sunday’s 2-0 loss to Orlando in an NWSL game in front of an announced crowd of 3,298 at SeatGeek Stadium in Bridgeview. Morgan Gautraut exited in the 62nd minute and Danielle Colaprico left in the 72nd minute, and both left the stadium on crutches. Dames said both were injured on plays that should have been carded.

“We’re running low on players,” Dames said. “I hope to have the national players [this weekend] but who knows? Having three of the four back will help us immensely.”

The Stars are back to even with a 6-6-2 mark and are in fifth place with 20 points. Gotham and Orlando also have 20 points but are ahead of the Stars in the standings at third and fourth places, respectively, because of goal differential.

A victory over Orlando would have meant a second-place showing for the Stars heading into this weekend’s action, but it was not meant to be as they suffered their first shutout since a 3-0 home setback to Louisville on June 26

This was the first time the two teams met this year and first time they squared off since Sept. 11, 2019, when the Stars scored a 1-0 victory in Florida on a Krueger header in stoppage time. 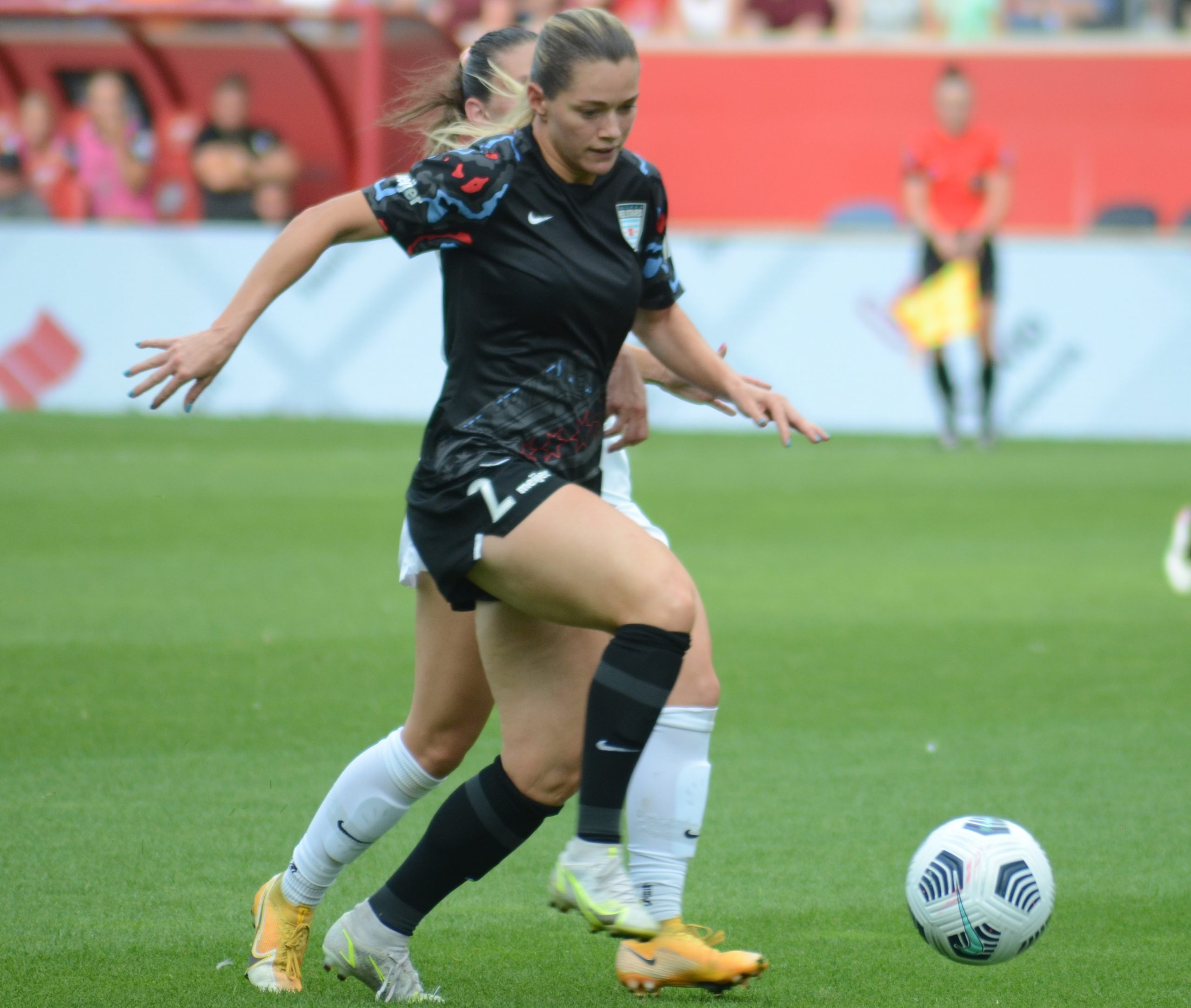 Kealia Watt of the Chicago Red Stars moves the ball in Sunday’s loss to Orlando. Photo by Jeff Vorva

July stars
Chicago’s Mallory Pugh and Gautrat were named to the NWSL’s July Team of the Month as voted on by the NWSL Media Association.

Gautraut was named for being a presence for the team during the four-game stretch in July.

Biden his time
Dames was not interested in responding to former President Donald Trump’s comments that the United States women’s soccer team would win the Olympic gold medal if the players weren’t “woke.”

“What did President Biden say?” Dames said. “I wonder what he said. That would be my answer.”

The Stars beat the Courage, 1-0, in Bridgeview on June 5 as Rachel Hill scored in the 29th minute. 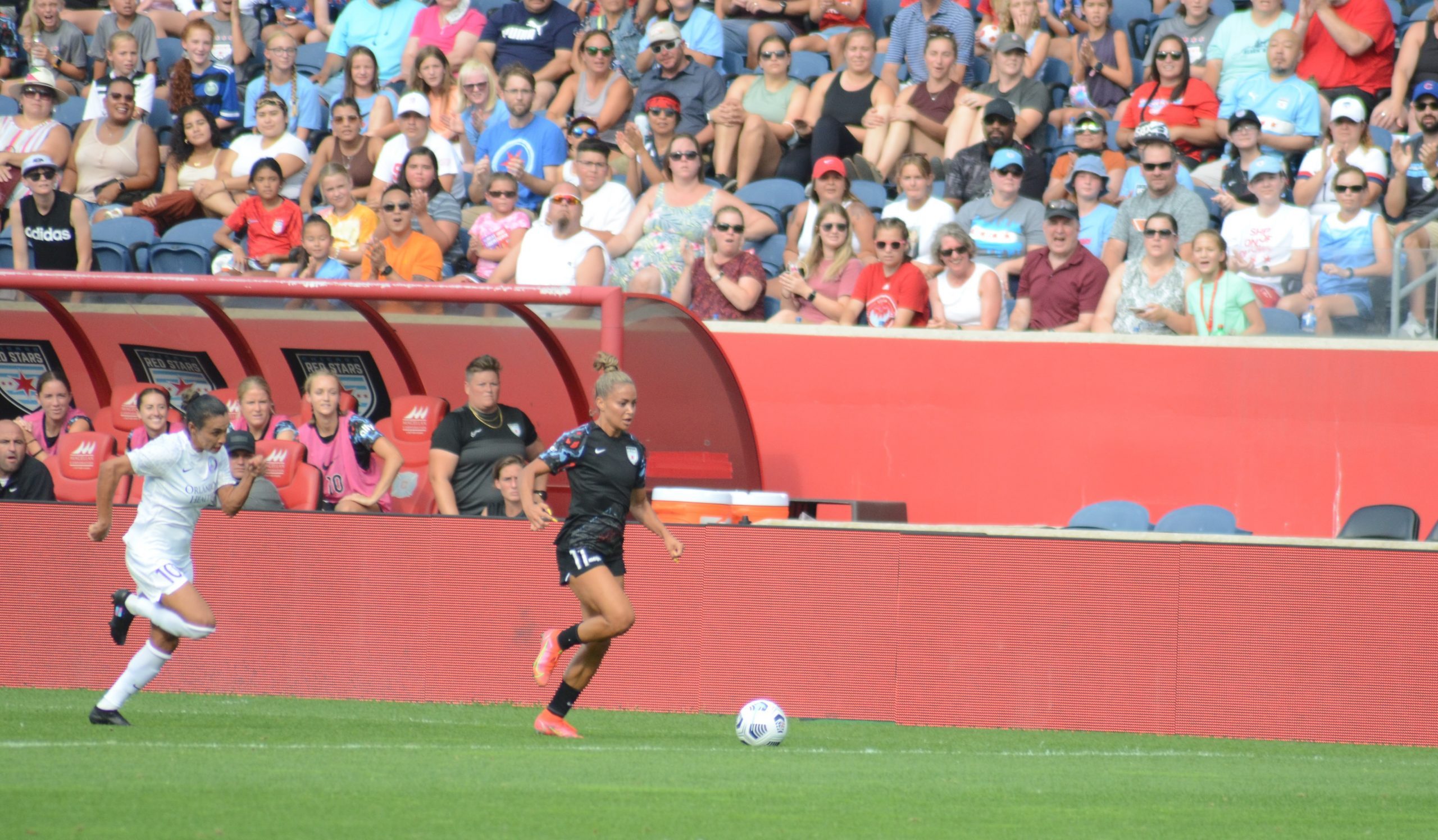 Chicago’s Sarah Gordon finds some running room in a 2-0 setback to the Orlando Pride on Sunday at SeatGeek Stadium. Photo by Jeff Vorva