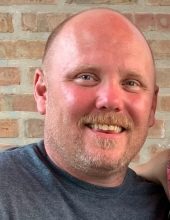 Sandburg lost a teacher and coach before the school year even started, leaving students, former students and colleagues stunned.

Bill O’Donovan, who coached football and girls track and taught special education at the Orland Park school, died suddenly on Aug. 5. He was 45.

A gofundme.com account was created in his name to help his family.

“Coach O’Donovan was an inspiration to us on and off the field,” wrote senior Nathan Gibbons, who helped start the gofundme page for the coach. “Bill O’Donovan was an amazing coach, teacher, leader and father.

“He touched all lives that surrounded him.”

Sandburg girls track coach Tony Pena was devastated by the news of the O’Donovan’s death and had the unenviable task of informing his athletes.

“We did our best to get the teams from the past few years on a virtual meeting later that morning so that we could share the news with the girls personally, instead of them hearing it through other channels,” Pena said. “As a coach, Bill was truly beloved by our girls. They were shocked and heartbroken at the news, like we all were.

“Bill’s greatest strength as a coach was building genuine and lasting relationships with his athletes. It’s those loving relationships that made the news of his passing so much more difficult to hear and process.”

“We are all still shocked and saddened by the sudden loss of Coach OD,” he said. “As our coaches, athletes and staff members still try to wrap their heads around this, we remember Bill as a teacher and coach that truly connected with so many students and athletes. He will forever be missed, and our hearts go out to his entire family.”

Pena will miss the conversations he and O’Donovan shared over the years.

“We both have boys of similar ages,” he said. “It was common for us to chat about our long night ahead as we were leaving track practice and heading straight to one of our boys’ baseball practices or games.

“Beyond football and track and field, Bill loved baseball and especially loved being involved with his boys’ team. We lost a pillar in our program and the world lost a really good human being.”

He is survived by his wife, Gina, and his sons, Colin and Dominic.

Visitation was Aug. 10 at the Robert J. Sheehy and Sons Funeral Home. A funeral was held Aug. 11 at St. Terrence Church in Alsip. Interment was at Holy Sepulchre Cemetery.