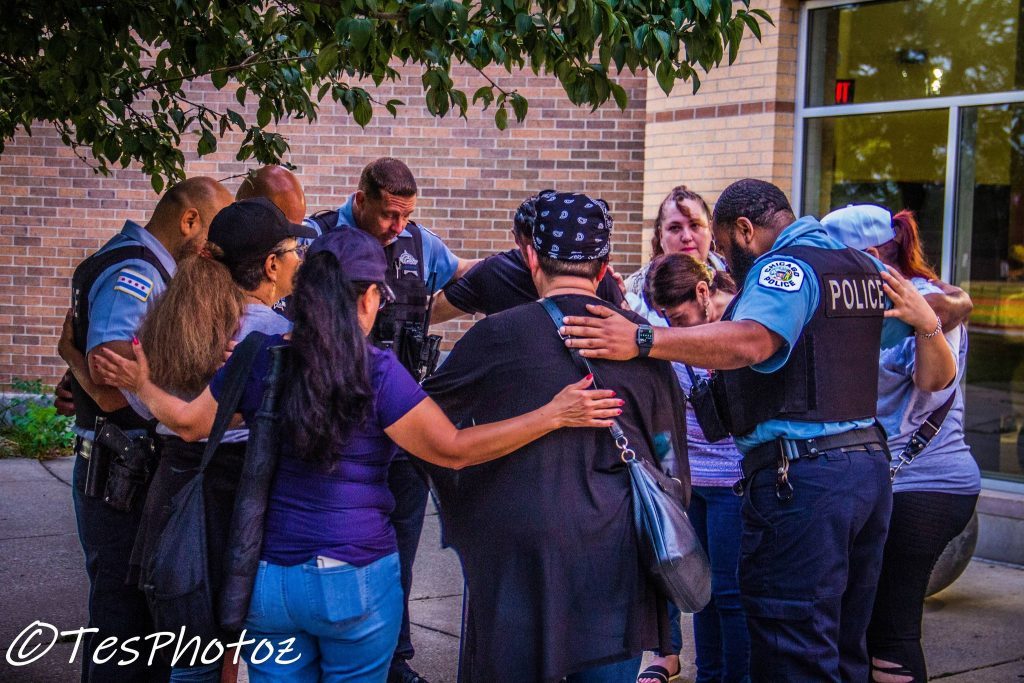 Police officers and others shed tears and shared hugs at a prayer service last week at Hale Park. The event attracted hundreds of men, women and children who prayed for the repose of the soul of Police Officer Ella French, as well as the recovery of Officer Carlos Yanez, both of whom were shot at close range during a traffic stop on Aug. 7. --Photo courtesy of tesphotoz

‘A punch to the heart’

Clearing and Garfield Ridge—home to perhaps more law enforcement officers and families than just about any other Chicago neighborhood—reacted with shock, grief and outrage over the slaying of CPD Officer Ella French earlier this month. 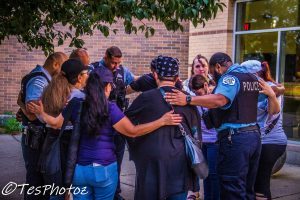 Police officers and others shed tears and shared hugs at a prayer service last week at Hale Park. The event attracted hundreds of men, women and children who prayed for the repose of the soul of Police Officer Ella French, as well as the recovery of Officer Carlos Yanez, both of whom were shot at close range during a traffic stop on Aug. 7. –Photo courtesy of tesphotoz

“I’d call this a gut punch, but it’s worse. It’s a punch to the heart,” said Antonio Sanchez, one of more than a hundred men, women and children who attended a prayer service at Hale Park on Monday, Aug. 9. “It’s hard to describe the pain.”

Both French and Yanez were rushed to the University of Chicago Medical Center, where she was pronounced dead at 9:30 p.m. Yanez, shot in the eye and elsewhere on his body, was listed in critical condition and was expected to make a long, slow recovery.

The 29-year-old French lived in the Ashburn neighborhood, about two miles southeast of Clearing.

While petitions to the heavens were plentiful at Hale Park, some said more is needed.

“Thoughts and prayers are fine, but we have to go beyond that,” said Martin Perez, a day after the prayer service. “We need to take a long, hard look at why a punk with a gun apparently thinks it’s OK to stick it in the face of two police officers and pull the trigger. We need to look at our politicians who enable that behavior—everyone who’s soft on crime, from the mayor to the Cook County state’s attorney to the aldermen. We need to organize to vote them out of office. We can’t save Ella French, but can do our best to prevent this from happening again.” 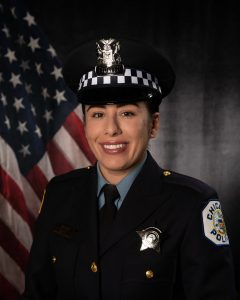 Officer Ella French, who had served with CPD since 2018, was described by her brother as a humanitarian, a Good Samaritan and a “very caring person.” –Supplied photo

Elzbieta Piworski agreed that more than prayers are needed, but said everyone “must focus on getting rid of guns in this country. The only people who should own guns are the military and the police. Chicago has strict laws against guns, but when you can easily get around that by driving to the suburbs or to Indiana and basically buying whatever you want there—well you see what I mean. If [the Morgan brothers] did not have guns on them, Officer French would be alive, and Officer Yanez would not have lost an eye.”

Mary Lynn Jacobs said what is needed are prayers “but also a refocus on the family. So much of the immorality we see today, so much of the disregard for human life, can be traced to the breakup of the traditional family. You’ve got all these situations where the father is entirely out of the picture; and if the mother is there, she’s struggling. Then the kids run free on the streets and learn to lie, to cheat, to steal, to kill. It’s a terrible thing, and we need to find a way to start raising children right.”

Two charged in the aftermath

Charged with first-degree murder was 21-year-old Emonte M. “Monty” Morgan, of the 1200 block of North Cleveland. He also was charged with two counts of attempted murder of a peace officer, as well as aggravated unlawful use of a weapon by a convicted felon.

Charged with two counts of aggravated unlawful use of a weapon, as well as obstruction of justice was 22-year-old Eric Morgan, of the 1900 block of East 73rd Street.

The Morgans are brothers. Bond was denied for both. The brothers were due in court again on Monday, Aug. 16.

Emonte Morgan was struck by gunfire from either French or her partner, CPD officials said. He was transported to Advocate Christ Medical Center, where he was initially listed in stable condition. He remains hospitalized at a Cook County Department of Corrections facility.

Several people in Clearing and Garfield Ridge said they planned to attend court proceedings to demand justice for Officer French and Officer Yanez. 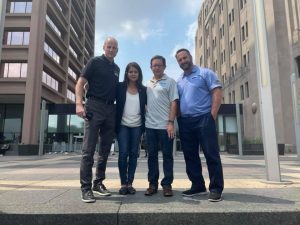 Twenty-third Ward Ald. Silvana Tabares joined Alds. Raymond Lopez (15th) Anthony Napolitano (41st) and Jim Gardiner (45th) at the Criminal Court Building at 26th and California at bond hearings for Emonte “Monty” Morgan and Eric Morgan. “I hope all Chicagoans who care about safe communities pay close attention to this trial and the actions of Kim Foxx and Tim Evans, because their actions of releasing dangerous felons back into our communities and eroding the morale of CPD have made every Chicagoan less safe,” Tabares said. “Politicians say CPD needs oversight, but the voters can now step up and be the oversight of the politicians who would rather coddle criminals than support victims and their families.” –Supplied photo 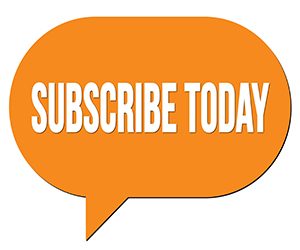