Skip to content
August 20, 2021/Comments Off on No masking emotions — citizen spars with Orland mayor over mask opinions 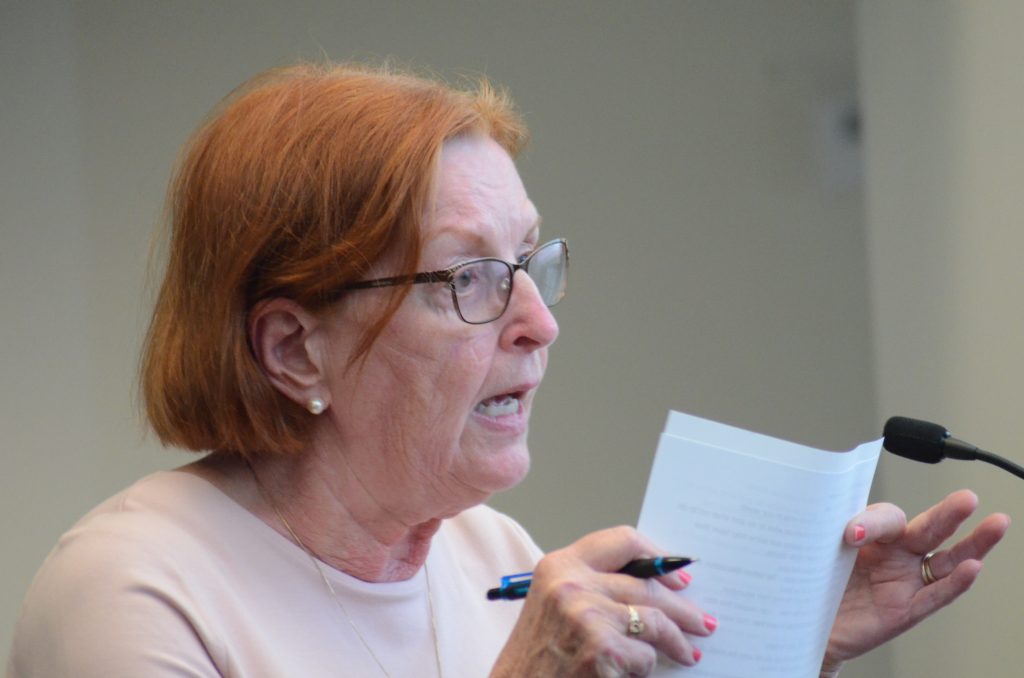 Orland Park’s Sue Stratton addresses the Village Board of Trustees with concerns on its stance on masking. (Photo by Jeff Vorva)

In an odd exchange, Orland Park resident Sue Stratton spoke to the village board Monday night about the mask controversy and preached kindness, but then left the meeting yelling.

The imbroglio started when Stratton, who referred to herself as “Grandma Sue,” took issue with Orland Park Mayor Keith Pekau’s alleged comments on WGN-TV about masking.

During a special board meeting on Aug. 6, which was attended by a few Chicago television stations including WGN, Pekau and the board made speeches denouncing Gov. JB Pritzker’s mandate of teachers and student wearing masks in schools.

The general theme during that late-afternoon gathering was that the state should make its decision based on data while emphasizing that mask wearing in schools should be an option and that parents should decide.

Stratton said she was upset that Pekau would go on TV and tell people not to wear masks.

“If there is one baby put on a vent because somebody didn’t wear a mask, that’s one baby that died too many,” she said. “I’m old. I can die. OK. I don’t want to see any child die because the mayor said, ‘don’t wear a mask.’”

Toward the end of her talk, Stratton said, “Be kind – that’s what we need in the United States. Be kind. Thank you.”

Pekau said that he never told people not to wear a mask and the two argued briefly before Pekau banged his gavel with a ferociousness shown in months past when there were arguments with former board members.

“You’re out of order,” the mayor said to Stratton. “It’s my turn to speak. You had your turn.”

Stratton yelled, “No, no, no, – you can put me in jail. Because you said that the children should not have to suffer for the grandparents.”

“I said it’s a parents’ decision whether or not a child wears a mask,” Pekau countered. “That’s what I said.”

After she questioned why trustees were not wearing masks, she said, “Goodbye – I’m going to leave on my own accord. Have a good day. If you see me in a store, my name is Grandma Sue. Please wear a mask. I’m old.”

Pekau reiterated that he never said children should not wear masks and a review of the WGN-TV report bears that out.

Later in the meeting, Pekau presented more facts and figures supporting his belief that a mandate is not the right thing to do.

He said this hot-button issue is causing people with differing opinions not to listen to each other.

“When it was our turn to speak — instead to just stomp out of here as opposed to listening to what we have to say is exactly the problem,” he said. “People don’t listen to the other side.”

Speaking of Blue Oyster Cult, that rock group joined Mark Farner’s American Band and the Fabulous Thunderbirds for a triple-bill concert on Saturday night at Centennial Park West and Director of Parks and Recreation Ray Piattoni estimated there were between 1,300-1,500 in attendance.

The weekend prior was the Taste of Orland Park and the village was hoping for a return to the 40,000 mark for the three days as was seen in the pre-COVID days. Piattoni estimated a crowd of 32,000 as rain on the third day kept some people away.