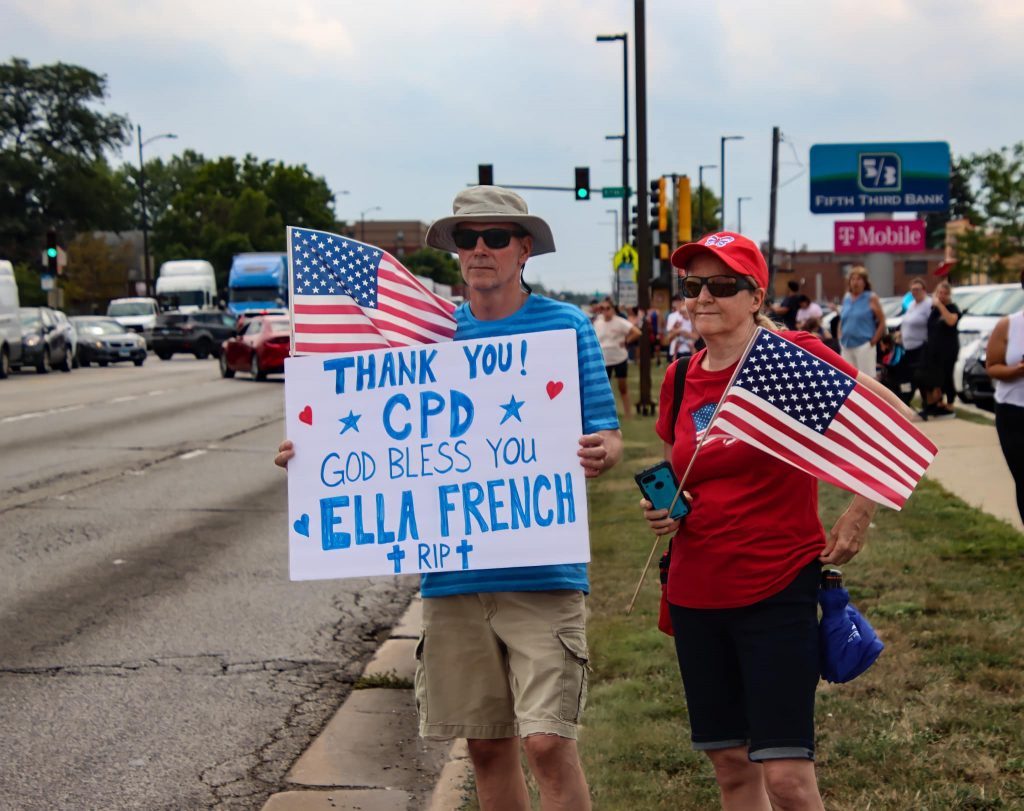 French’s family was driven south on Harlem from the Stevenson Expressway to 79th Street, then east to her visitation Aug. 18 at the St. Rita Shrine Chapel at St. Rita High School. Her funeral was held the following day. 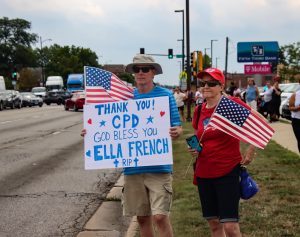 The 29-year-old French was shot in the head and killed earlier this month during a traffic stop at 63rd and Bell.

Although the motorcade along Harlem was over in moments, there were no complaints voiced about waiting on a muggy afternoon.

“It’s a shame,” said Clearing resident Susan Herkel, 61, as she stood near 77th and Harlem and fought back tears. “Chicago is losing too many of their police officers.”

“I have a lot of friends who are police officers, and they are just scared for their lives,” Herkel said. “Mayor Lightfoot needs to step up and do something.”

Her mother, Marie Wurtz, 86, said, “I think it’s terrible. I feel sorry for the families.”

A bit north, near Archer and Harlem, Jim Difronzo said Chicago’s leaders “need to take a long, hard look at how we prevent this sort of thing from happening. There’s a real breakdown of respect for authority in Chicago and in this country, and I think a lot of that is driven by politicians and prosecutors who are soft on crime, to the point where criminals don’t think twice about shooting another person, even a police officer.”

Sherri Kitzmann said she is “tired of mourning the death of our police officers, whether it’s through them being killed on the job or taking their own lives or whatever. I cry every time I hear of another officer dying. Where will it end? When will it end? Does it ever end?”

Jason Kennedy said he wishes the U.S. “would implement a national gun-control system, like Australia did after [the Port Arthur Massacre]. They proved that sensible gun control can happen, and the number of gun crimes in Australia to incredibly low numbers. If they did it, so can we.”

Back near 77th and Harlem, Willow Springs Police Chief Jim Ritz was impressed by the turnout. He noted the strong suburban connection with Officer French who, as a girl, attended Gross School in Brookfield and Riverside-Brookfield High School.

“I feel so, so sad for the city of Chicago and its police officers,” Ritz said.

Bridgeview resident Armando Martinez, 56, came “to show respect for the police officer.” He regretted forgetting his American flag at home.

“It’s bad, really bad,” he said when asked about the danger police officers face every day.

“She was a young officer, too,” he added.

Martinez’ wife, Cynthia Velasquez, 52, said, “It’s a shame what police go through…this is senseless, senseless. They didn’t have to shoot her.”

Several children were in the crowd.

Theo Sanchez, 32, of Bridgeview, brought his two daughters, who are in the fifth and fourth grades.

“I want them to understand the importance of family,” said Sanchez, who called French’s death tragic.

“I have family on the (police) force, and I can’t imagine having to go through this,” Sanchez said. “For her and her family, I feel terrible.”