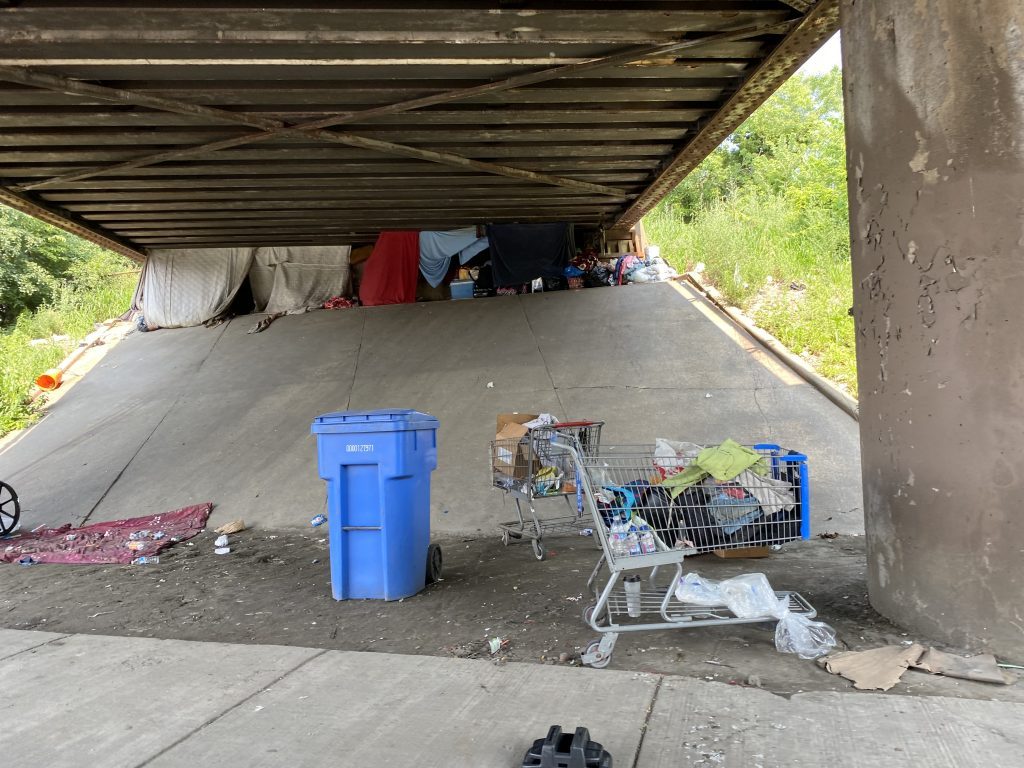 A view of the underside of the I-55 overpass at Cicero Avenue, days before a multi-agency cleanup. --Greater Southwest News-Herald photo by Cosmo Hadac

‘We’ll see this through’

Weeks after a multi-agency service blitz cleaned up the underside of the Stevenson Expressway overpass at Cicero Avenue, a handful of squatters have returned to claim the space as their home.

In response, neighbors who have long complained about the squalor have redoubled their efforts with elected officials and others to clean it up again and install security fencing. 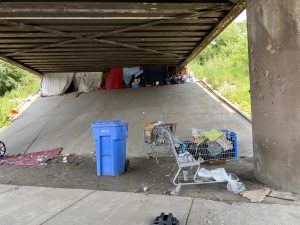 A view of the underside of the I-55 overpass at Cicero Avenue, days before a multi-agency cleanup. –Greater Southwest News-Herald photo by Cosmo Hadac

While the AHCA is not the only neighborhood group to ever have complained about the situation that could be described as messy at best, filthy at worst, it was the AHCA’s most recent pressure that convinced the Pritzker Administration to direct both the Illinois Department of Transportation and the Illinois State Police to evict the squatters, offer them free shelter and food, and clean up years of accumulated feces, weeds, needles and syringes, animal carcasses and more.

Baliga and others have credited State Senator Antonio “Tony” Muñoz (D-1st) and State Rep. Aarón Ortíz (D-1st) with playing key roles in getting the job done. In fact, Muñoz last week told Baliga that IDOT will have a permanent fence installed by year’s end.

Until that time, neighbors have a struggle on their hands with squatters who have returned.

“The underside of the overpass is not fit for human habitation, especially as fall and winter approach,” Baliga added, “and the squatters there must be given options to get them into housing that is safe and secure.”

He said that in recent weeks, that is exactly what was offered to the dozen or so men and women living there—but that while most smiled and nodded at the offer, some refused when it came time to pick up their belongings and go.

“Most, if not all of these guys have some kind of struggle with alcohol or drugs or mental illness or some combination of the three,” Baliga added. “The ones who won’t take the offer of a helping hand probably don’t understand that they’ve hit rock bottom. Once they admit that to themselves, then they may be receptive to accepting help. But if they don’t, our compassion for our fellow man dictates that we can’t let them live in conditions that are hazardous.”

Several months ago, Baliga and others accused city and state government of being “enablers for addictions and other self-destructive behavior” by turning a blind eye to the encampment. This week, he applied that tag to individuals who give food and money to the squatters.

“The people who hand them cash or throw food out their car windows doubtless have the best of intentions,” Baliga said. “But what they don’t understand is they’re enabling alcohol and drug addiction, panhandling and more. They also don’t understand they’re contributing to the build-up of trash, as well as a resurgence of rat colonies, because a certain percentage of that food they fling will just sit there on the ground.”