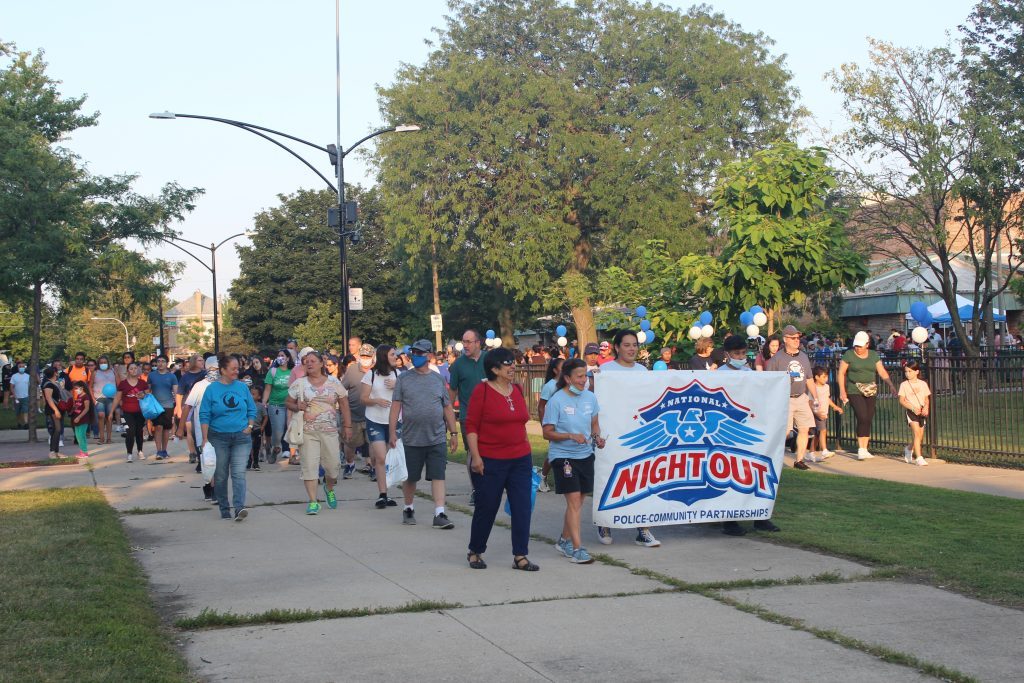 Neighbors of all ages—from senior citizens to babies in strollers—took part in a crime-fighting procession around West Lawn Park. --Photo courtesy of Veronica D’Andrea

Dog-days heat and humidity could not wilt the resolve of hundreds of Southwest Siders who showed up at the Chicago Lawn (8th) District observance of National Night Out at West Lawn Park.

The Eighth is by some measures the largest police district in Chicago. That was in evidence as people from just about every neighborhood were there—from Brighton Park on the northeast to Scottsdale on he Southwest, Garfield Ridge on the northwest to Wrightwood on the southeast. 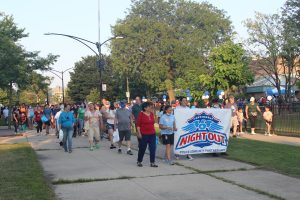 Neighbors of all ages—from senior citizens to babies in strollers—took part in a crime-fighting procession around West Lawn Park. –Photo courtesy of Veronica D’Andrea

The men, women and children in attendance heard words of encouragement from several elected officials, as well as Eighth District Commander Fred Melean and West Lawn resident Barbara Ziegler, who once again organized the annual event and mustered a crew of volunteers and corporate sponsors to make it successful.

“I’m so glad this event happened,” said West Lawn resident Idris Sandoval. “I wondered if it would get cancelled, with this new strain of COVID-19 spreading so quickly. But if Lollapalooza can go on, so can this, I guess.”

West Elsdon resident Julio Marquez said the community “needed this event to occur. After all we went through last year, with the protests, the rioting, the looting, the arson, it’s like the neighborhood feels bruised. A thing like this may show people that there’s light at the end of the tunnel, that law and order can be restored.”

Wrightwood resident Gladys Crandell said she enjoyed “the food, the beverages, the games and raffles for the kids. It was like a giant block party, and I even met a few people from my neighborhood. We’re hoping to organize block clubs and get folks more involved in the community.”

Clearing resident Bob Schneider said National Night Out is “not a magic wand, but a tool. It’s a chance for us to renew our efforts against crime. Hopefully, that’s what’s happening here and people will get more involved in CAPS meetings in neighborhood watches—even just knowing who your neighbors are and keeping an eye out to protect each other.”

West end of the district

In Police Beat 812 (the central and western sections of the Clearing neighborhood), about 20 people gathered for a brief prayer service at the southeast corner of Hale School, where a small memorial stone sits to honor the memory of two Clearing girls—Helena Martin and Carrie Hovel—who lost their lives in December 1995 when they were shot while sitting in a van during a confrontation between local teen boys and gang members from outside the neighborhood.

The girls were eighth graders at Hale.

The double homicide caused shock and outrage in Clearing and led to the creation of the Clearing Night Force, a neighborhood watch group still in existence. A handful of its members, wearing their signature green polo shirts, were on hand Tuesday evening.

In Police Beat 811 (the central and western sections of Garfield Ridge), members of the Garfield Ridge Neighborhood Watch led a motorcade through the streets to rally residents against crime.

The GRNW, now in its 12th year, was founded—with guidance from the Clearing Night Force–by three Garfield Ridge residents fed up with crime. The group now boasts more than 100 members.