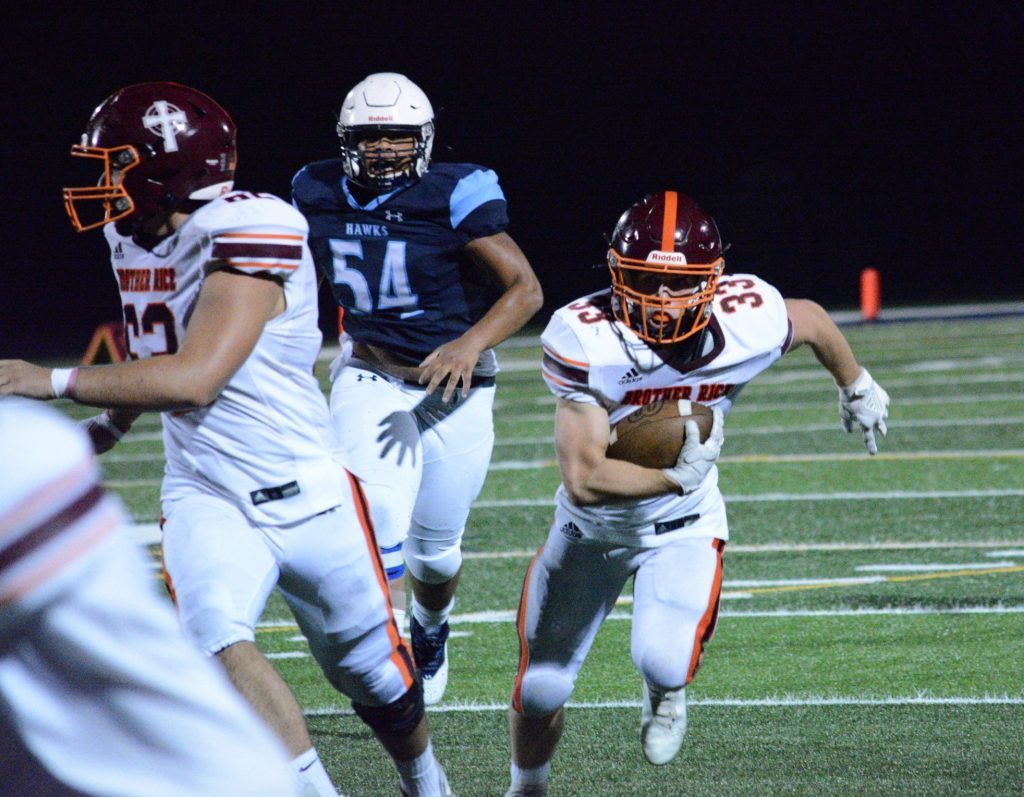 Brother Rice senior running back Tommy Bennett finds a hole in the Hillcrest defense during the Crusaders' 42-6 win on Aug. 27. Photo by Jason Maholy

As far as season-openers go, it couldn’t have gone much better for Brother Rice.

The Crusaders scored two touchdowns in the first four minutes and 18 seconds, and struck paydirt on five of six first-half possessions to open up a huge lead en route to a 42-6 victory over Hillcrest in Country Club Hills. All but the first 1:12 of the second half was played under a running clock.

Brother Rice senior quarterback Jack Lausch accounted for all five first-half scores, running for three and throwing two more to Da’Kobie Wordlaw. Lausch finished the first half 12-of-14 for 143 yards and was pulled early in the third quarter. He threw for 163 yards and ran 11 times for 79 more.

The Crusaders wasted no time getting going as Lausch, a two-sport star who will play football and baseball at Notre Dame next year, aired it out and hit senior wide receiver Danny White for a 52-yard gain on the game’s first play from scrimmage. Two plays later, he ran in from 3 yards out open the scoring.

Lausch said the game-opening bomb had been planned all week.

“We like to start fast,” Lausch said. “It’s awesome just to play, to play in the fall, just to get out here. We’ve been practicing hard all summer and we just wanted to go out and have fun and compete, and were looking to get better every week.”

Lausch was anointed the Crusaders’ starting quarterback late during his sophomore season in 2019 and helped Rice advance to the IHSA Class 8A semifinals, where they lost to eventual state champion Warren. His first half was impressive but not at all surprising to coach Brian Badke, who has come to expect excellence from his senior signal-caller. 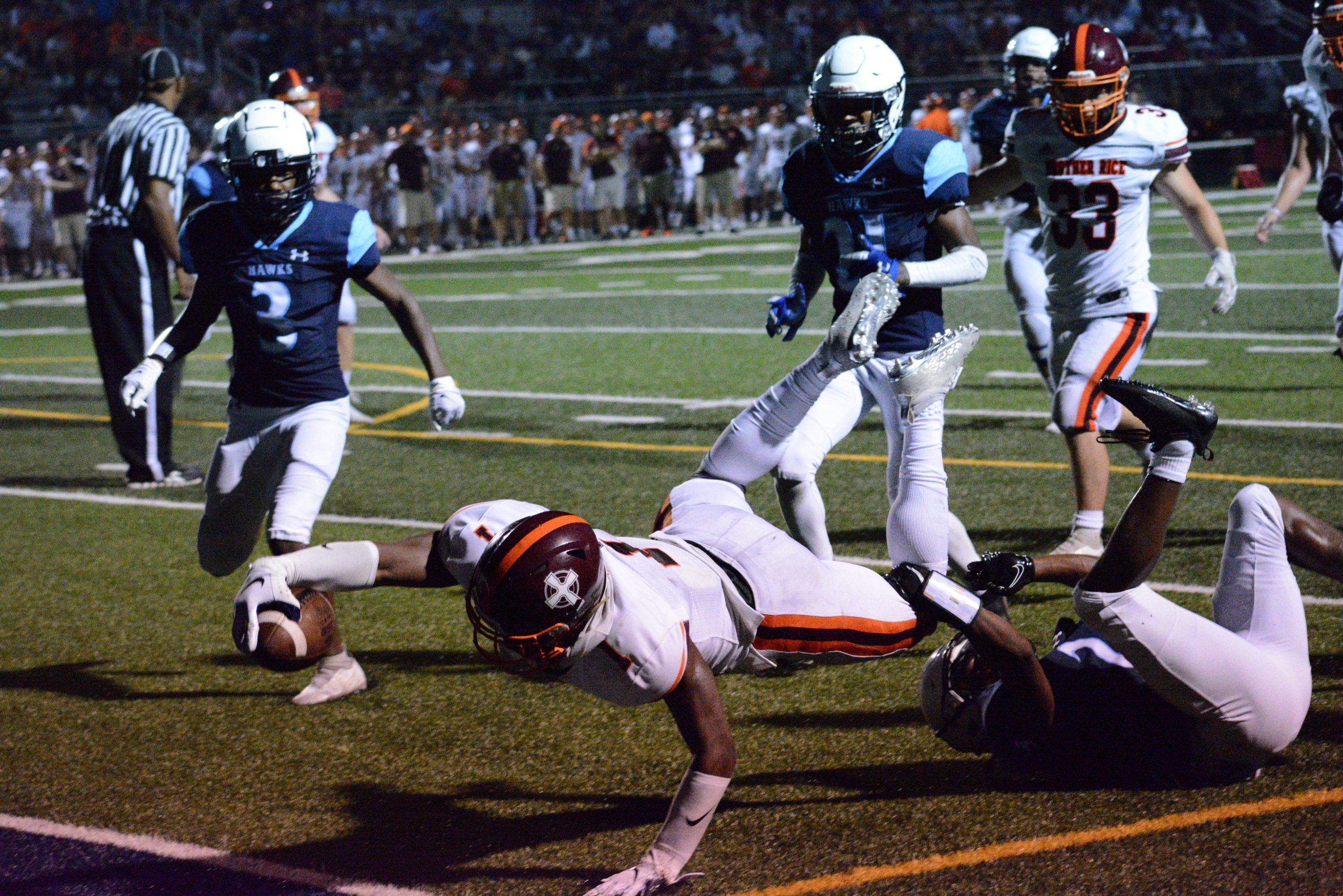 Brother Rice senior running back Khary Shaw dives and extends the ball over the goal line for a touchdown during the Crusaders win over Hillcrest. Photo by Jason Maholy

“He’s a three-year varsity starter and he’s locked in, he’s focused and he’s a leader,” Badke said. “He made some great throws and he’s a dual threat. When you have a guy like that he’s hard to defend.

“I think he can play quarterback [in college] and I don’t think you can tell him that he couldn’t.”

The Crusaders defense was dominant, forcing Hillcrest to punt on each of its first four possessions, and continually provided the offense with good field position. The Hawks did not record a first down until 1:59 remained in the first half.

“They played amazing tonight,” Lausch said of the defense. “They gave us great field position and they played a heck of a game. I’m always excited to watch them.”

Rice rolled despite several starters missing the game with injuries. Tight end Henry Boyer and running back Aaron Vaugh, the latter a transfer from Providence, are both out and expected to return in Week 3. The offensive line was not at full strength, which was evident as it struggled at times to create space for the running game.

“We’re banged up but, you know, next guy up,” said Badke. “I was proud of them and their effort. There are obviously things we have to clean up, but overall for the first game I thought they did pretty well. They were definitely prepared and they executed. 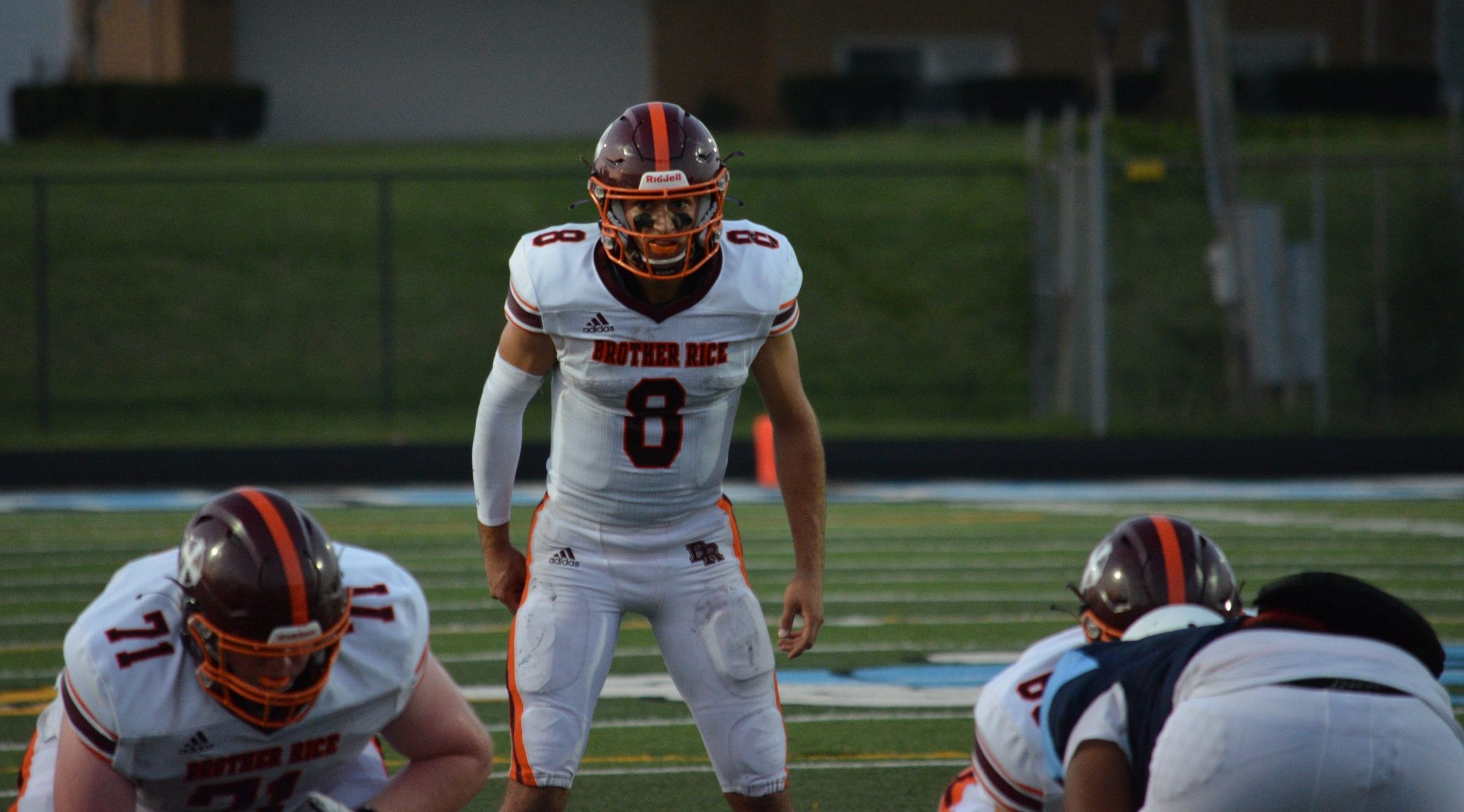 Brother Rice senior quarterback Jack Lausch ran for 79 yards and three touchdowns and threw for 163 yards and two scores in less than three full quarters in the season-opening win over Hillcrest. Photo by Jason Maholy

“The O-line’s going to get better. They’re going to improve every week and they’re definitely a group we’re going to lean on as the season goes on.”

Badke is in his final season at Brother Rice. He will step down after this year to spend more time with his family. Lausch said the players are rallying around the coach and will do all they can to win him a state championship, but Badke dismissed that narrative.

“I told them from the get-go this has nothing to do with me,” he said. “I don’t want to screw them up. I’m just here for the ride and I want to enjoy the season with them. I’m blessed to have coached for as long as I have and I’m blessed to coach these guys, and I love being with them.

“But this has nothing to do with me; this is all about them.”

Wordlaw, a senior wide receiver, caught three passes for 32 yards and the two touchdowns, and senior running back Khary Shaw scored on a 12-yard run.

On defense, Harry Ivers had nine tackles, including three solos.

The Crusaders will hit the road to take on Perspectives this Friday. Kickoff is scheduled for 7 p.m. 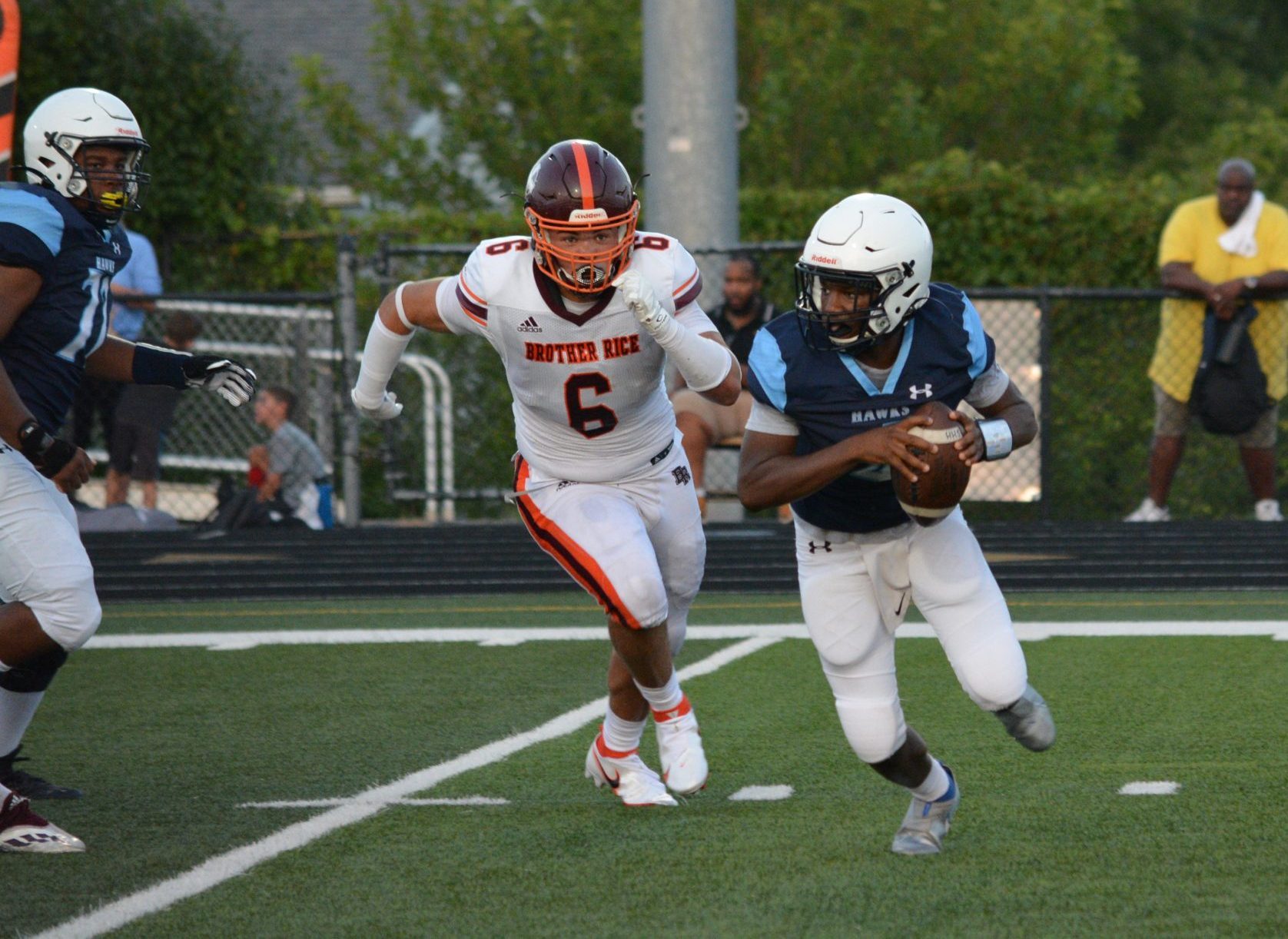