Skip to content
September 5, 2021/Comments Off on SD230 stands firm on masks 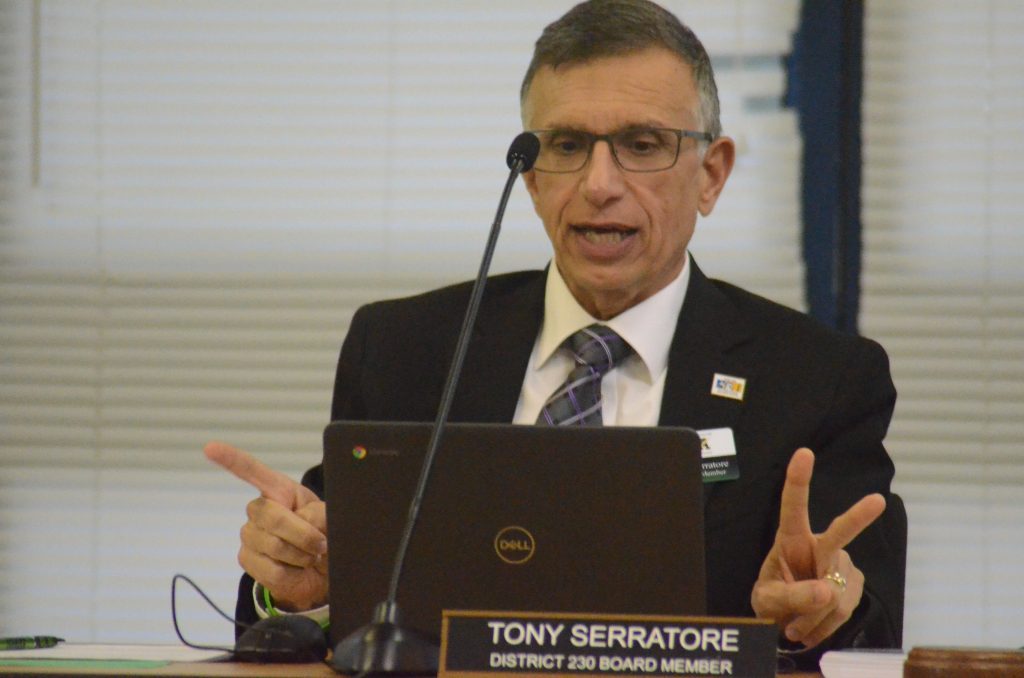 District 230 School Board President Tony Serratore, shown at a meeting earlier this year, is not interesting in going to war with Governor JB Pritzker over masking issues. (Photo by Jeff Vorva)

Board will not go to war with Pritzker over mandate

Some parents in recent weeks have encouraged District 230 school board members to stand up to Gov. JB Pritzker and his mask mandates for schools.

But members of the board, which serves Sandburg, Stagg and Andrew high schools, believe it would be foolhardy to go toe-to-toe with the boss running the state.

One parent spoke at the August 26 board meeting at Stagg in Palos Hills and ripped the governor for not allowing parental choice when it comes to wearing masks in schools and said D230 should rebel against him.

“There is a dictator in Springfield who is swinging his hammer and taking away funding from schools,” Bryan Roland said. “If enough schools stand up for it and join together, there will be limits on what he can do. He can’t discredit half of his state.

“Illinois is largely a pro-choice state. Parents want the choice to do what they want with their kids. I’m urging the board to talk to other districts.”

After the public comment section of the meeting was over, Board President Tony Serratore said the district’s hands were tied.

“If we don’t follow what the governor says, regardless of what you think we may be able to do, we won’t be able to do it because he can do whatever he wants,” Serratore said. “In the amount of time that we would spend fighting the governor if we didn’t follow his mandate, the children in that time frame would lose their ability to participate in extracurriculars and they would lose their ability to play sports. Potentially, we would lose funding. None of us here feel that that’s worth it.”

Roland continued to argue after his allotted time and Serratore told him to sit down or he would be asked to leave.

“Be a leader, not a follower!” Roland said.

“We’re doing what’s best for your children whether you believe it or not,” Serratore said.

Shortly before the conclusion of the meeting, board members continued to defend their position.

“Many times, the best way to lead is to not pound your chest and show how tough you are but show people how smart you are and be diligent and stewards of the community,” Supt. Robert Nolting said. “The best way to handle this is keeping your powder dry and continuing to move forward.”

Board member Dave O’Connor said the district could lose $16 million in funding by taking a stand against Pritzker.

The board meeting took place after several fall sports began and a day before the 2021 football season was about to open.

“If we were fighting the governor right now and if we were not requiring those makes, those kids would not have played those games and there would be no football,” Serratore said. “I don’t want to be the person to go to those athletes and say, ‘Sorry guys, you’re not getting to play this week.’

“I’m happy where we are and everybody has done a great job.”