September 6, 2021/Comments Off on High School Football: Oak Lawn’s McGlynn, Duer star on offense and ‘D’ in win over Stagg 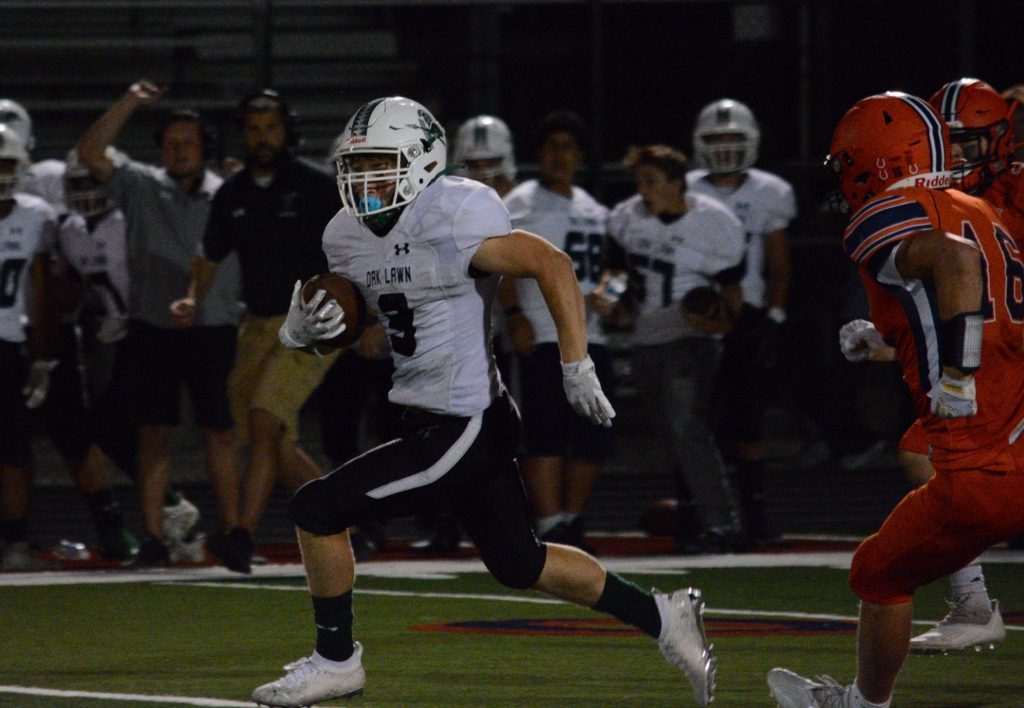 Oak Lawn running back Nicco Reyes runs for a chunk of his 93 yards during the Spartans’ 40-21 win over Stagg on Sept. 3. Oak Lawn ran for 395 yards and piled up 508 overall. Photo by Jason Maholy

Oak Lawn defensive end Jack McGlynn had never played offense in a game prior to the Spartans’ Week 2 matchup with Stagg.

After his performance against the host Chargers, coach Ryan Pattison will have a hard time keeping the versatile junior off the field, period. McGlynn did damage on both sides of the ball, catching two touchdown passes to go with an interception, forced fumble and fumble recovery.

His contributions helped Oak Lawn to a 40-21 triumph, its first of the season. They’ll try to make it two straight this week when they visit Eisenhower in the South Suburban Red opener for both teams.

It was also the first career head coaching win for Pattison, who was proud of how the team rebounded after a 64-8 loss to Rich Township in the season-opener.

“I love the way we responded, and we showed what we’re capable of when we’re playing as a team and we’re firing on all cylinders,” Pattison said. “We had a good week of practice, even though the game didn’t go in our favor last week. It was special to see and it’s great to know the youth in our program are buying in.”

One player who has bought in is McGlynn, who had little interest in playing offense but after the loss to Rich knew he had to do whatever was asked of him to help the team.

“But this feels great. I’ve been here for three years and this is the best team we’ve had so far, and we are keyed up. We had the best summer and we worked so hard for this.”

With only 38 players on the roster, the Spartans need their best players to make contributions on both sides of the ball. McGlynn’s skill set makes him the kind of player Pattison can thrust into that role.

“He’s a very physical kid, but that rare combination in that he’s big enough to block and gifted enough athletically where he can catch the ball and do things with the ball in space,” the coach said. 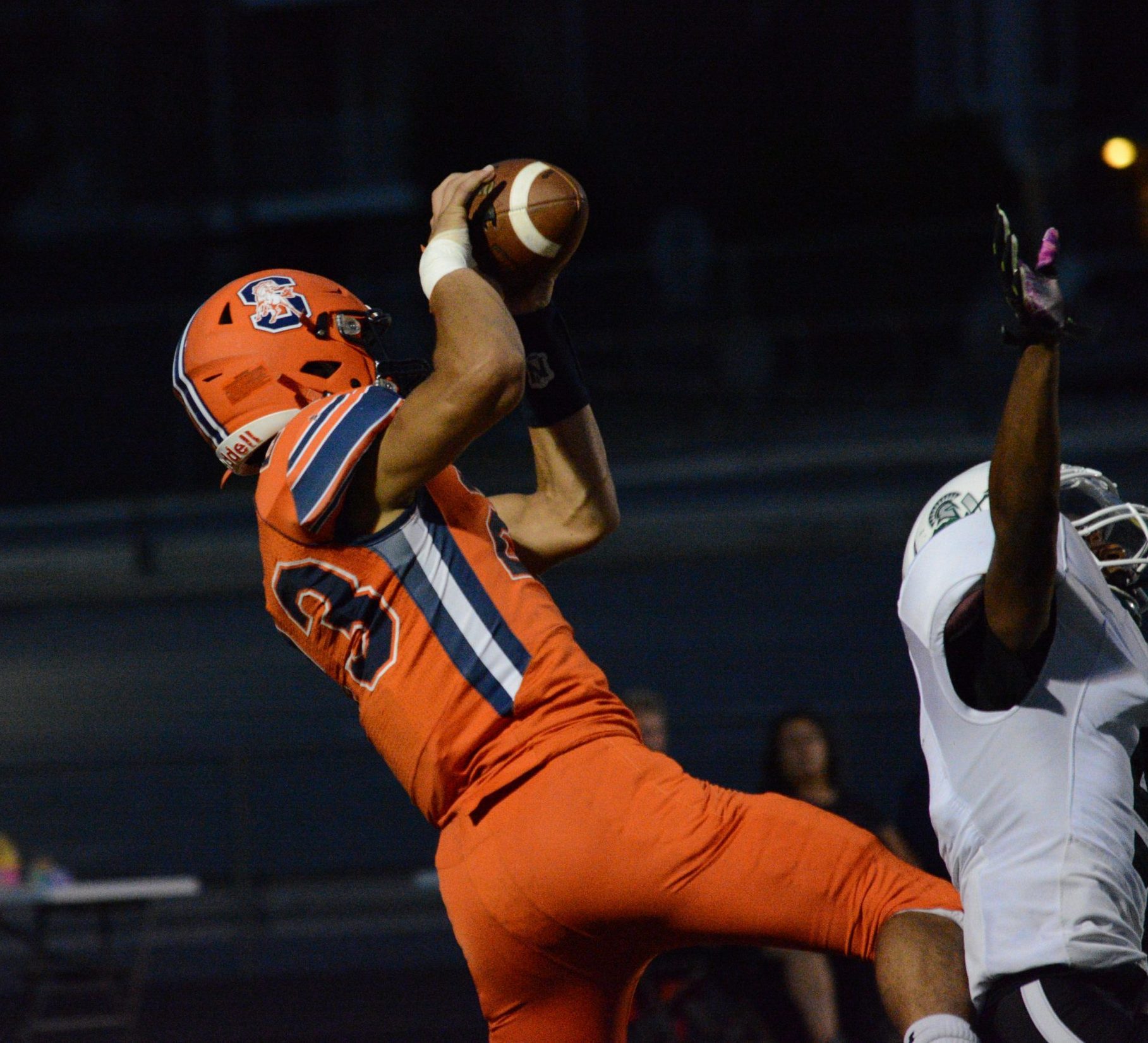 Stagg’s TJ Griffin outleaps an Oak Lawn defender to come down with a touchdown pass during the Chargers’ 40-21 loss to the Spartans on Sept. 3. Photo by Jason Maholy

Another two-way player who stepped up big against Stagg was Gabe Duer, who starts at quarterback and linebacker. Duer completed only two passes, but one was a 44-yard touchdown to McGlynn that evened the score at 7 in the first quarter. He also ran for 50 yards and two touchdowns, and forced one fumble and recovered another.

McGlynn’s second touchdown, a 39-yard catch-and-run, came in the third quarter on an Ayham Salah pass that was deflected by a Stagg defender. McGlynn snagged the ball out of the air while never breaking stride and outraced the remaining Chargers defenders to the end zone.

The score and extra point extended the Spartans’ lead to 27-15.

Salah’s touchdown came on a designed quarterback sweep in which he found room on the right sideline, then made multiple tacklers miss as he bolted toward the end zone.

“He did a heck of a job getting to the edge and making something happen in space, and that’s what a lot of our guys can do when they get the ball in space,” Pattison said. “We have some athletes and it’s fun to watch them, fun to coach them.”

Providing them running room was an offensive line anchored by sophomore center Mustaf Qurt, who Pattison said has established himself as the leader of a unit that also includes junior tackles Adam Gallardo and Ben Zanabrin, and junior guard Edward Busha. Senior Fabian Melendez and sophomores Daniel Sweig and Victor Almeida have been rotating at left guard.

“[Qurt] was here all summer and in the weight room all offseason, working his butt off, so it’ll be nice to have him for a couple more seasons to come,” Pattison said.

For Stagg, things were looking positive before play was halted with 2:54 remaining in the second quarter. The Chargers had just taken a 15-13 lead on a nifty 15-yard catch-and-run by wide receiver Terry Rodgers and a two-point conversion.

Before the teams lined up for the ensuing kickoff, Stagg administrators directed everyone in the stadium into the high school because of a situation involving a firearm in the neighborhood just east of the stadium. 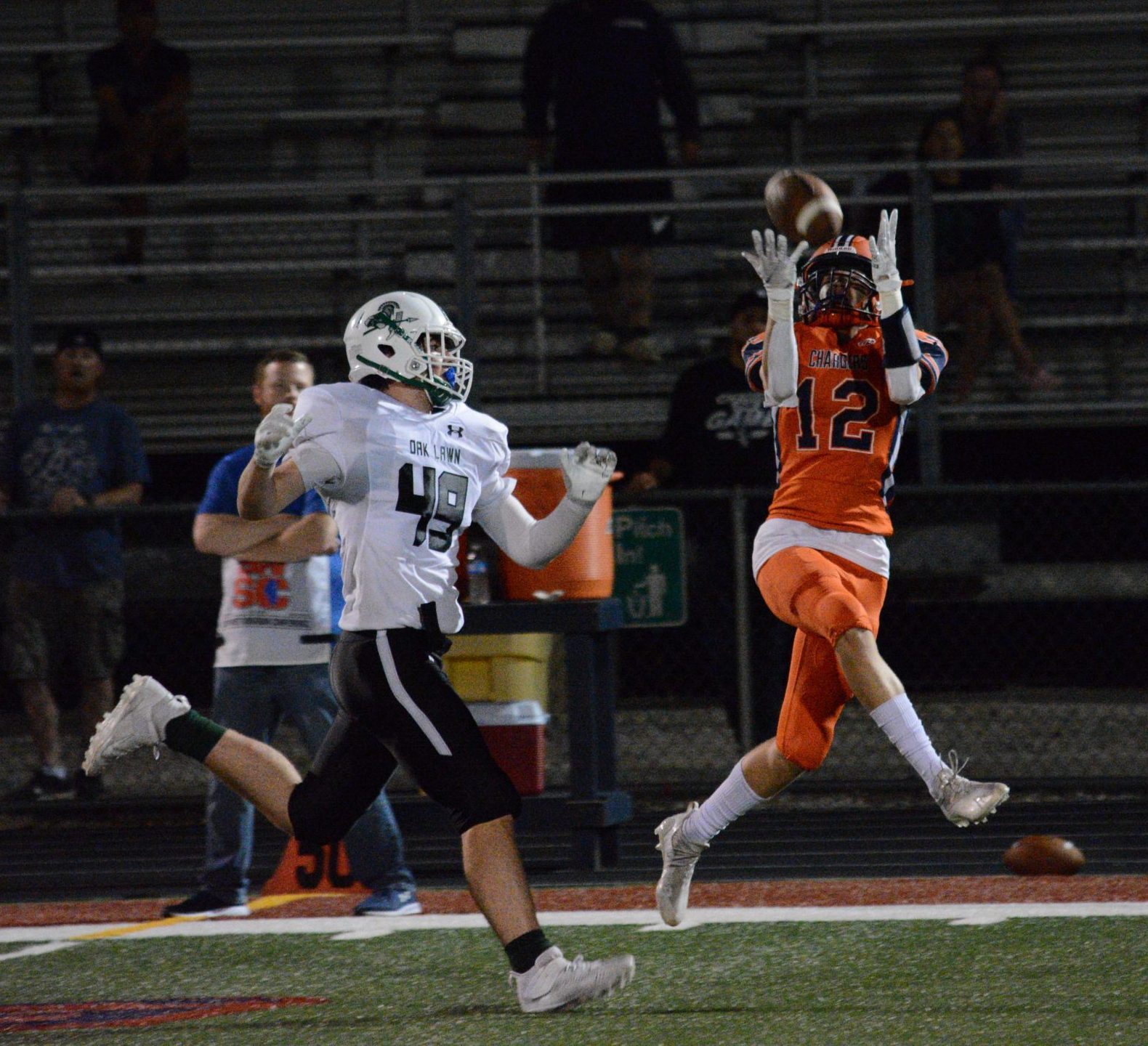 Stagg defensive back Daniel Sweeney runs under a pass for an interception. Photo by Jason Maholy

Returning from the break roughly 30 minutes later, Oak Lawn went to its two-minute offense and scored on a Duer 2-yard run and converted a two-pointer to retake the lead, 21-15, before halftime.

Stagg never seemed to recover. Four turnovers and inopportune penalties didn’t help their cause. One infraction for unsportsmanlike conduct followed an interception and runback by junior Daniel Sweeney that would have set up the Chargers offense inside the Spartans’ 40 yard line.

“We’ve got to get better,” Stagg coach Colt Nero said. “We’re killing ourselves with penalties, not controlling the controllable, feeding into the unnecessary stuff we shouldn’t be focusing on.

“We’ve talked to them about taking our lumps, but we have to learn from our lumps and continue to get better so we aren’t making the same mistakes over and over.”

The Chargers opened the scoring on a 29-yard pass from sophomore quarterback Lebarion Gilmore to TJ Griffin, who leaped high above an Oak Lawn defensive back to grab the ball in the end zone.

Another Stagg senior wideout, Moe Ahmed, outleaped two Spartan defenders to come down with a 28-yard scoring pass from Gilmore that made it 38-21 early in the fourth quarter.

Nero praised Griffin and Ahmed for their efforts and their overall impact on the team.

“They’re polar opposite individuals, but those two are the kind of guys you want on your team,” he said. “TJ is the vocal leader, brings it every single day, challenges guys the right way, probably the most mature guy on the team. Moe is quiet and leads by example. He battles through everything, comes to practice every day and just competes his butt off.

“That’s all you can ask for as a coach are guys who compete every day. And they’re both phenomenal teammates.”

Nero is also high on Gilmore, a sophomore who is a dual-threat under center.

“We have an incredible amount of confidence in him,” he added. “He’s mature for a sophomore and we’re really excited about him. He has an awesome arm and he’s really fast, and when it starts to click for all of us we think it’s going to be dangerous.”

The Chargers have lost 16 straight games going back to the second game of the 2019 season, and their road gets no easier this week with a visit to Frankfort to take on Lincoln-Way East. The Griffins won the 2019 state championship in Class 8A.

“We’ll come back next week and have a great week of practice get back at it.” 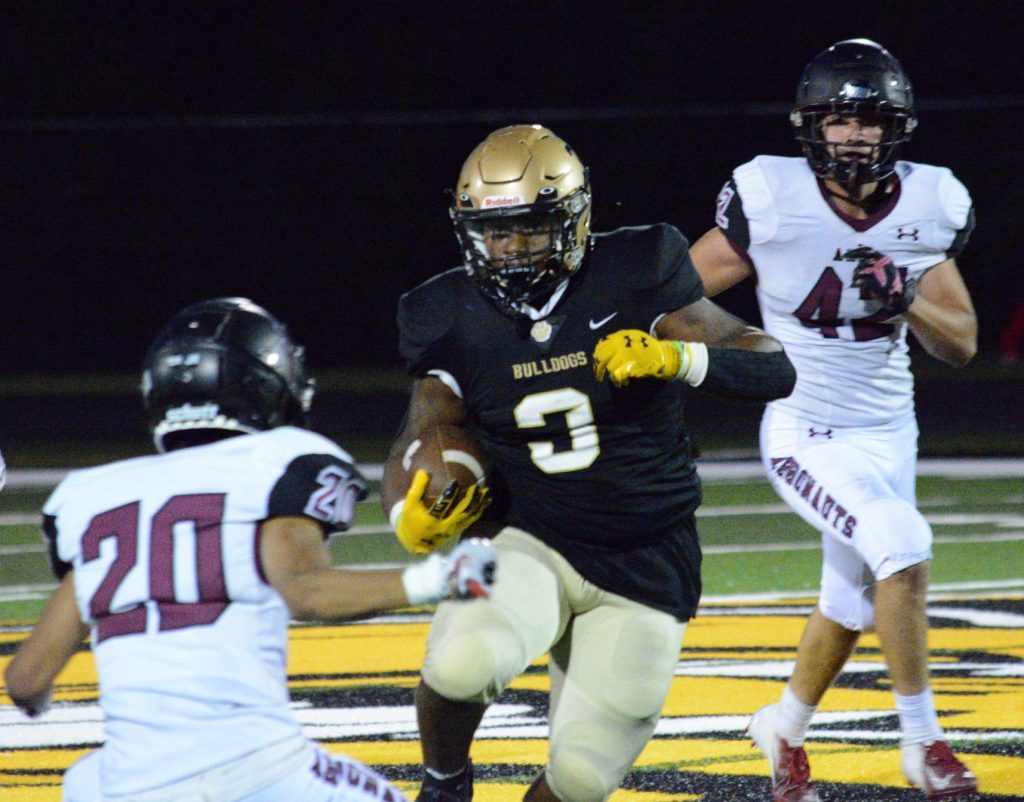 By Jeff Vorva Correspondent When Shepard beat Richards 42-8 in the spring season, it was the first time the Astros had beaten the Bulldogs since 1993. “That left a bad…

By Steve Millar Correspondent Argo’s offense has found some new firepower with a key addition. Its defense has continued to thrive despite a crucial, but temporary, loss. The situation has… 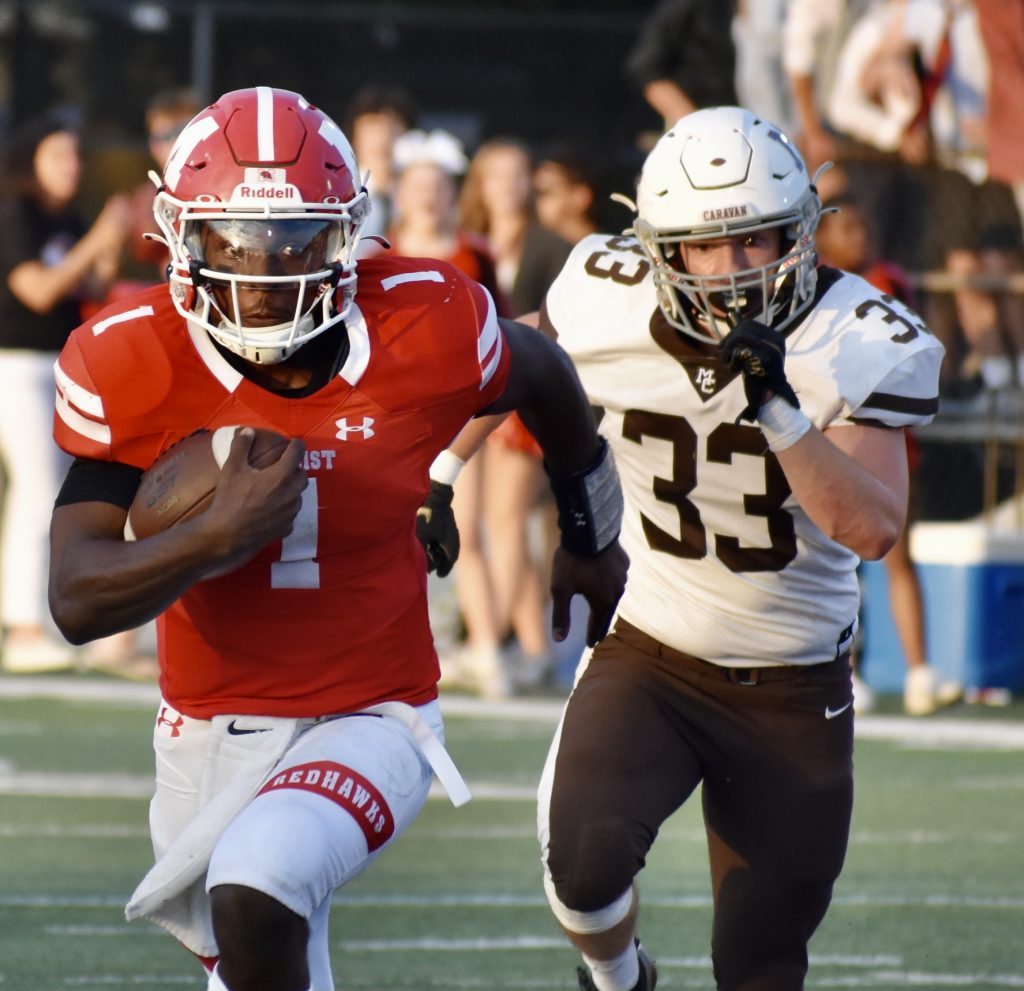 By Steve Metsch Correspondent After waiting through a 90-minute lightning delay for the second half to begin, Mount Carmel wasted no time getting back to full speed. The Caravan scored… 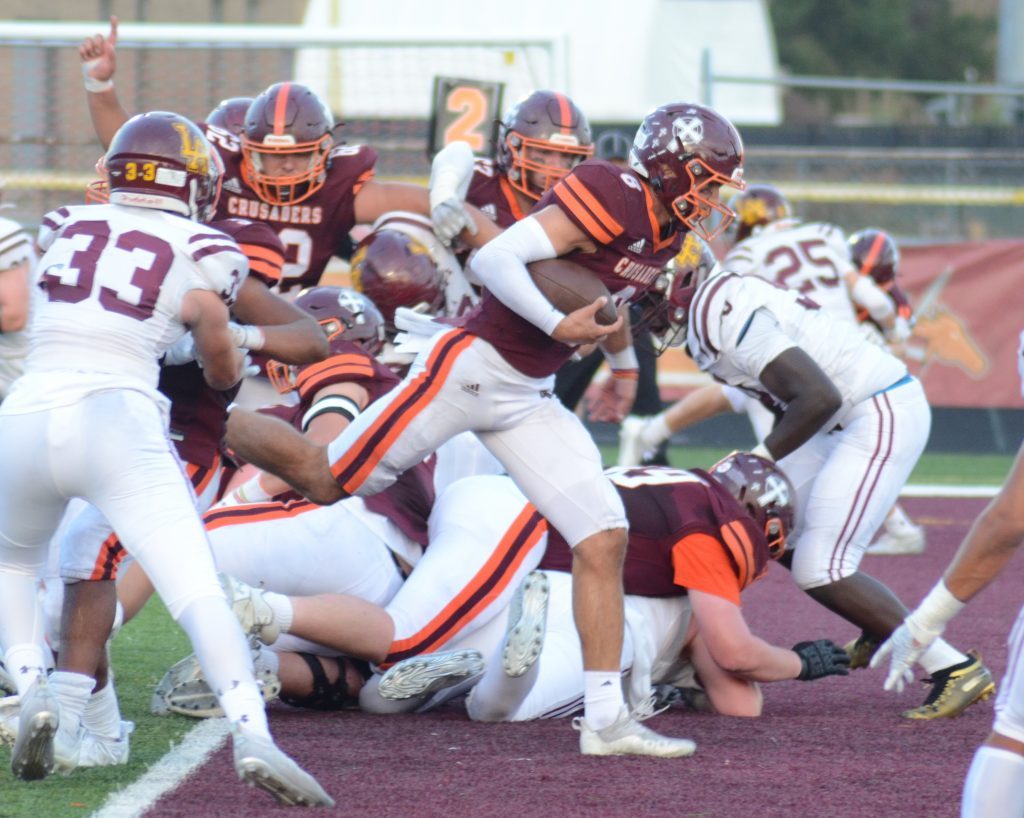 By Jeff Vorva Correspondent What happens when you put four monster football programs in one conference? Monster matchups. Monster games. And monster seasons. The third season of the Chicago Catholic… 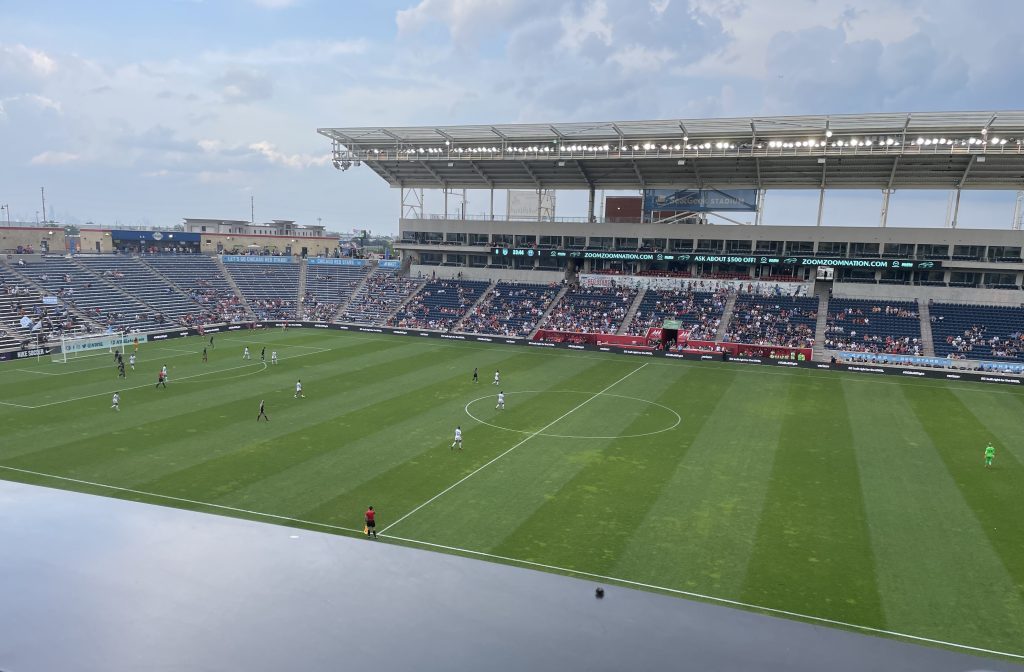 By Jeff Vorva Correspondent The Chicago Red Stars would like to wipe away the memories of a season-opening drubbing at the hands of Portland, and a great way to do… 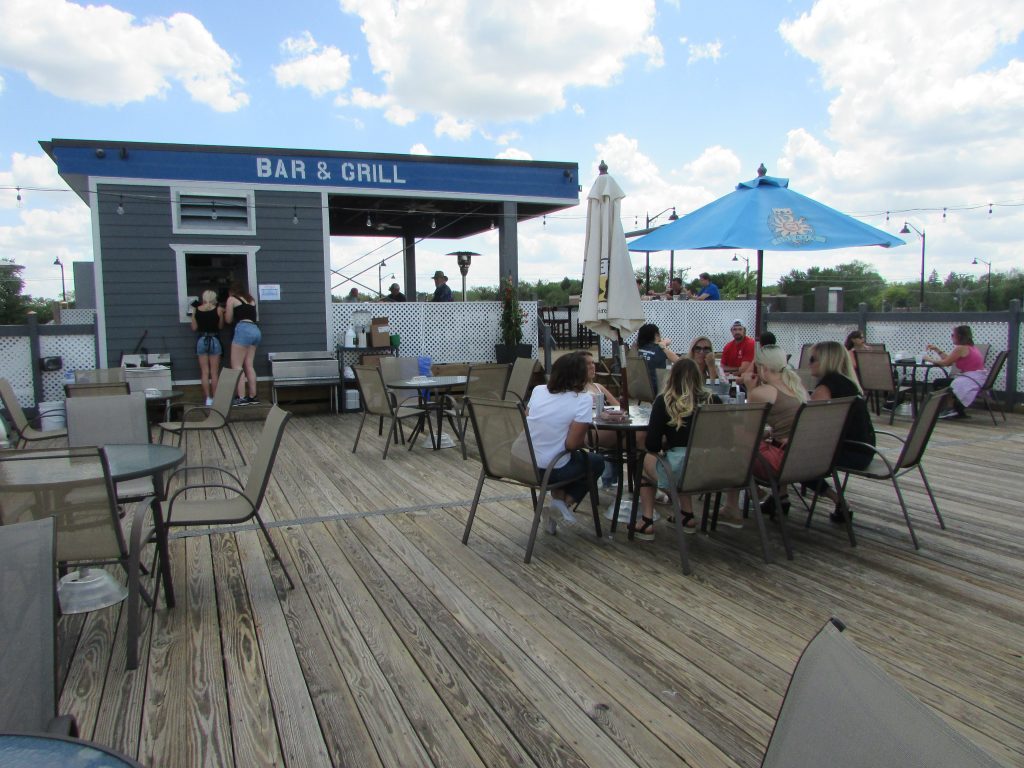 By Jeff Vorva In the past 10 years, the topic of video gambling has been a hot-button issue in Palos Heights whenever it has been brought up. And it was… 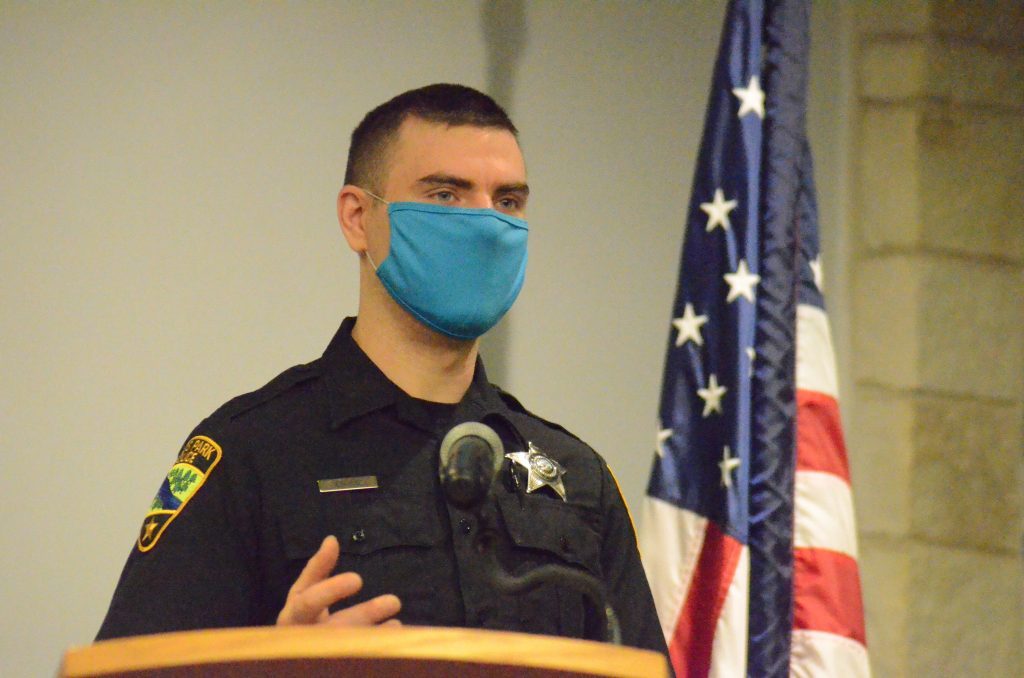 By Jeff Vorva Right place. Right time. In a story full of what-if scenarios, Palos Park police officer Ross Chibe found himself in an unusual situation on July 26 in… 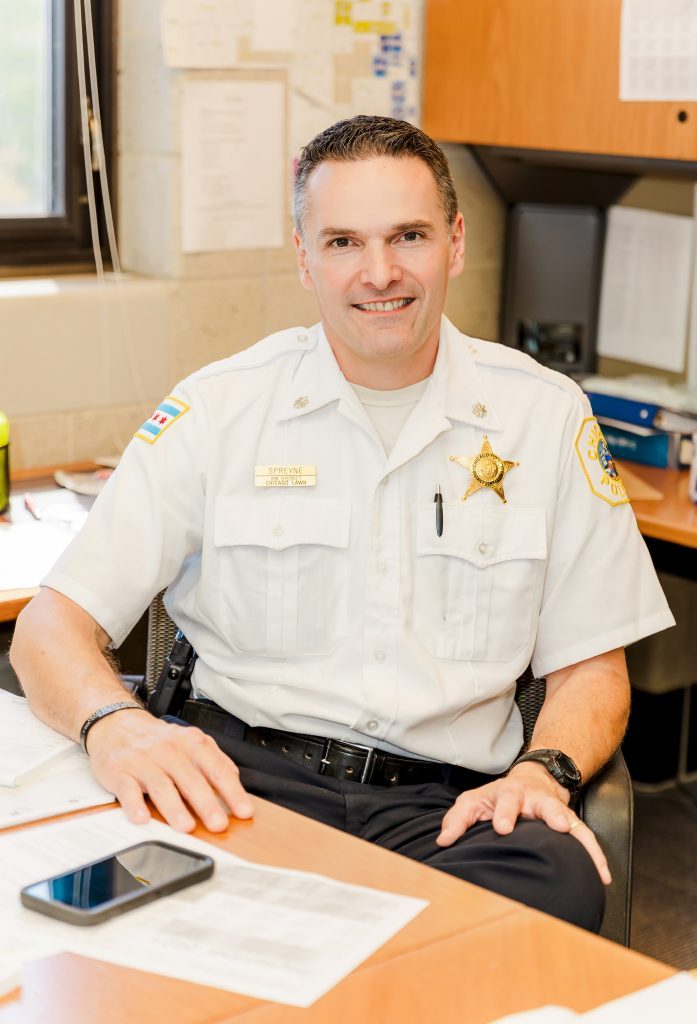 People have a right to feel safe, commander says By Tim Hadac The new police commander in the Chicago Lawn (8th) District is assuring Clearing and Garfield Ridge residents of…

By Ray Hanania I don’t know how many times I’ve heard Mayor Lori Lightfoot talk about being a woman, an African American and gay. I don’t care what anyone is.… 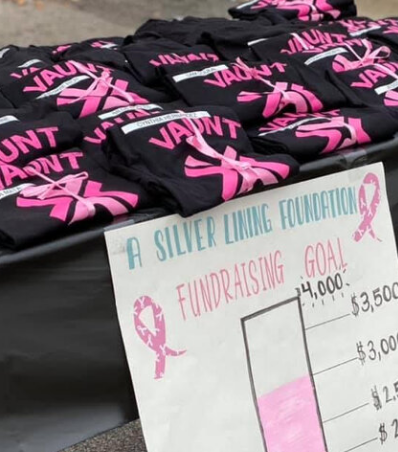 By Joan Hadac Your correspondent in Clearing and Garfield Ridge (708) 496-0265 • [email protected] Hi everyone. I hope you’ve had a good week. The folks over at Vaunt Fitness have a… 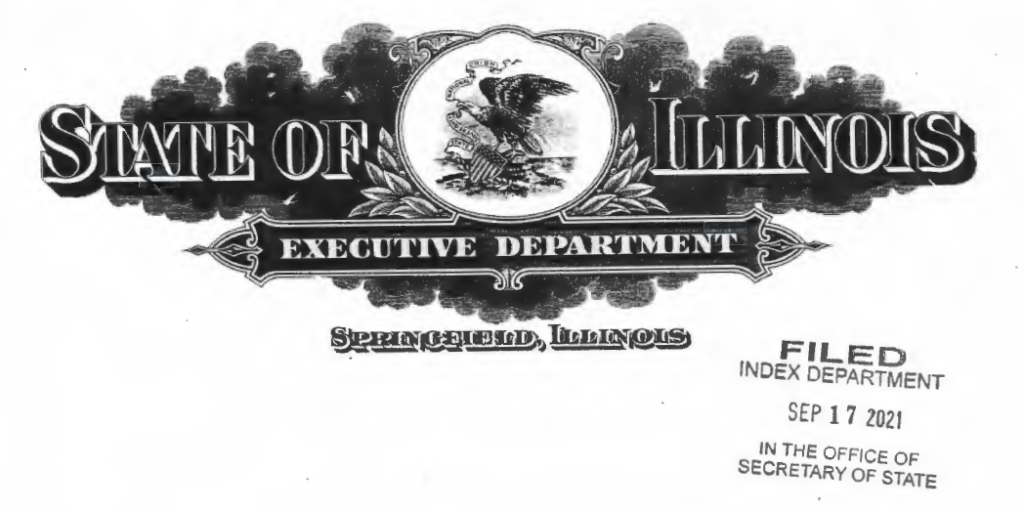 By JERRY NOWICKI Capitol News Illinois [email protected] SPRINGFIELD – The Illinois Supreme Court is being asked to consider the laws of the state of California and the U.S. Constitution in…

By Capitol News Illinois SPRINGFIELD – Gov. JB Pritzker on Wednesday, Sept. 15, signed into law a sweeping energy regulation overhaul that aims to phase out carbon emissions from the…

By JERRY NOWICKI Capitol News Illinois [email protected] SPRINGFIELD – Gov. JB Pritzker was joined by environmental and social justice activists, union representatives, and lawmakers from both parties Wednesday as he…

By Capitol News Illinois SPRINGFIELD – The Illinois Senate put the final legislative stamp on an energy regulation overhaul bill Monday, sending it to Gov. JB Pritzker, who says he…

Energy bill heads to Pritzker, who says he will sign it

PODCAST: What does the energy bill do?

In our latest Capitol Cast, Jerry Nowicki and Peter Hancock analyze the massive energy overhaul bill that passed out of the House during a one-day return to session. Plus, a…

CAPITOL RECAP: Energy bill heads to Senate, Pritzker says he will sign it

House passes energy bill with labor, environmental groups on board

Our paywall will be active soon. Consider subscribing to SRP to continue to access all of your local news.

Sign up now and be entered into a drawing for a free pair of Blue Man Group tickets.

Soon our paywall will be active. Sign up now and be entered into a drawing for a free pair of Blue Man Group tickets. Click here to subscribe and access all of your local news
Holler Box