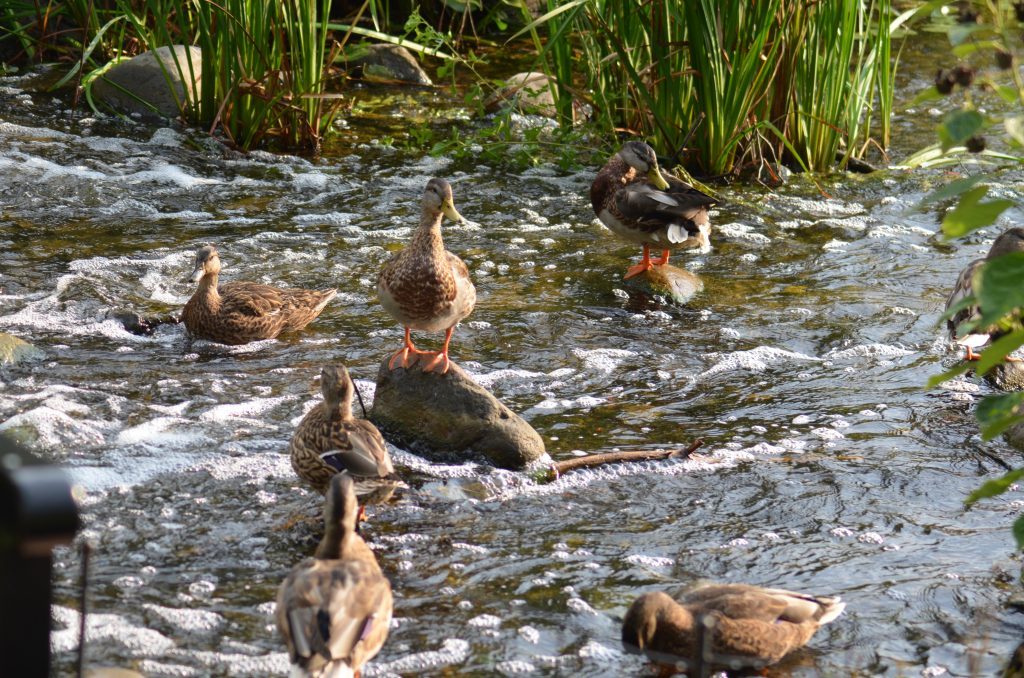 A raft of ducks enjoy the Lake Katherine stream between storms on Tuesday. The city of Palos Heights is seeking to lease Lake Katherine for 50 more years. (Photo by Jeff Vorva)

The City of Palos Heights is looking to lease Lake Katherine for another 50 years.

The popular park was a topic of conversation at Tuesday night’s City Council meeting. The council voted unanimously to begin negotiations with the Metropolitan Water Reclamation District of Greater Chicago to surrender the city’s existing lease in exchange for a 50-year lease.

“If you remember, a couple of weeks ago we approved to get an extension on a lease so that we can do some work on Lake Katherine,” Mayor Bob Straz said. “The MWRD informed us that they don’t do extensions. You have to surrender your existing lease and go into a new lease. So that’s what we’re doing. We’ve already been in communication with our legal department on that.”

Speaking of work at the park, a slab on the west side of the park was placed there earlier this summer for purposes of building a bike rack.

Ald. Donald Bylut (1st) said that clearly the residents in the area did not want that there and that the city didn’t consult them about it. He was also wondering why the council didn’t have the opportunity to vote on it for approval.

Ald. Heather Begley (3rd), who is the chair of municipal grounds and property, said the project has been halted and admitted that residents should have been consulted by the committee.

“It’s a balancing act with what the residents near Lake Katherine want and what the general population might benefit from. Since then alderman [Brent] Lewandowski and I have met with them to discuss their concerns with Lake Katherine. We have started a nice relationship with the residents.”

She added that since the committee voted to approve it and the project was “well under” the $5,000 limit to bring to the council, it was not brought to the council for a vote.

Ald. Jerry McGovern (4th) said that local veterans returning home from Afghanistan may need an adjustment period and some help.

“At the end of every war, you get discharged early,” he said. “If your enlistment is four years, it may be six months earlier. That means these people will be coming back from the war and they will have to be re-established to their civilian life, which is a challenge.

McGovern suggested the Orland Park Vet Center, 8651 W. 159th St. in Orland Park, as a starting point. He said that center can help with medical needs and has job services available.