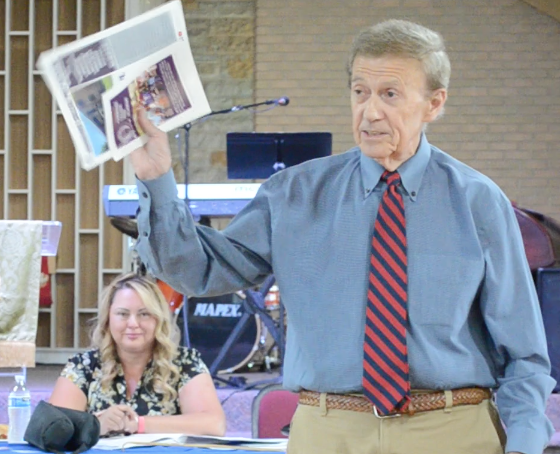 Another new high school in Clearing?

The Clearing neighborhood has not been home to a high school in the last 100 years; but within the space of just two weeks, one high school opened and the 2022 debut of a second was announced.

A week after Hancock High School opened the doors at its new home near 64th Place and Central, plans were unveiled for Harbridge College Prep.

Harbridge will be situated in the old St. Rene Goupil School space, 6949 W. 63rd Place. St. Rene was shut down by the Archdiocese in 2015.

A brief outline of Harbridge was offered at this month’s meeting of the Garfield Ridge Chamber of Commerce, held Sept. 7 at CrossRoads Community Church. About two dozen business owners and employees attended.

“I’ve always been concerned about what I consider to be an outdated institution today, which is the American high school,” said Michael J. Bakalis, president and CEO of the American Quality Schools Corporation, a non-profit he founded in 1999. “I don’t think it’s geared to what the economy of the 21st century’s going to be about.” 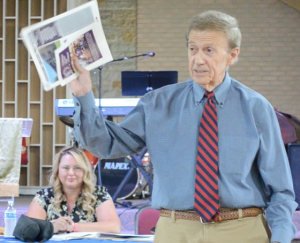 He said Harbridge is “a different model” of high school education. “It’s based on a university model. Its emphasis is on writing, reading, public speaking, analytical thinking and problem solving. That’s what’s going to win the economic race of the 21st century.”

Bakalis, 83, has built a long career in and around education. He started as a junior high and high school teacher. In the 1970s he was elected Illinois State Superintendent of Education. He served in the Carter Administration as a Deputy Undersecretary of Education.

He also has served in leadership roles at Loyola University, Northwestern University, Northern Illinois University and Triton College. In the 1980s, he was a leader of the school reform movement in Chicago that resulted in, among other things, the first-ever creation of Local School Councils to give parents and community members a greater voice in public schools.

The American Quality Schools Corporation has launched and managed schools in Illinois, Indiana and Missouri. Currently, AQSC operates a grade school on the West Side. In 2015, AQSC tried to launch Harbridge College Prep in Batavia, but enrollment peaked at about 40 students, causing it to close before it even opened.

Bakalis also is familiar to many as the state comptroller in Illinois back in the 1970s. He also was the Democratic nominee for Illinois governor in 1978. Bakalis ran for president in 1988.

At the GRCC meeting, he said that two-thirds of high school graduates in Illinois today are so ill-prepared for college, they have to take remedial courses in reading, math and writing when they go to community college.

“I’ve got to ask myself, ‘What have they been doing in high school? What’s their [high school] diploma worth?’” he said.

Tuition will be about $10,000 a year, which Bakalis said compares most favorably to other top-tier high schools like the prestigious Latin School, which currently charges $39, 585 annually.

For families unable to afford $10,000 tuition, Harbridge students will have an option to pay at least part of the cost through a work arrangement with the school.

Unlike selective-enrollment schools (such as Hancock, for example), Harbridge will not require an entrance exam.

“HCP believes that all students can succeed when they are in an environment of outstanding teachers, innovative teaching strategies, and strong faculty mentoring,” reads a statement on the school’s website. “However, while enrolled in HCP, we hold all students to high standards that must be met. The academics are rigorous and there is zero tolerance for behavioral actions that cause disruption to others or to the school.”

Bakalis said the school needs 100 students to start. Most will be incoming freshmen, although sophomore transfers from other schools will be accepted. His idea is to grow the school by 100 students a year for its first four years, capping enrollment at 400 students to ensure personalized instruction and a sense of school community.

Harbridge is leasing the space from the Archdiocese; and while the school will be located in Clearing, there are no limits on where students may come from.

More details on the new school may be obtained by visiting harbridgecollegeprep.org. Applications may be found on the website and are due next June. Parents or guardians of prospective students may also request an application by phone at (312) 226-0707 or by email at [email protected].

“I think this will be a school that Clearing will be really proud of, a real community asset,” Bakalis said. “But I have to be honest: if I can’t get a hundred kids to enroll (by fall 2022), I can’t open. So I need everyone’s help in spreading the word and letting parents [of prospective students] know about what Harbridge has to offer.”