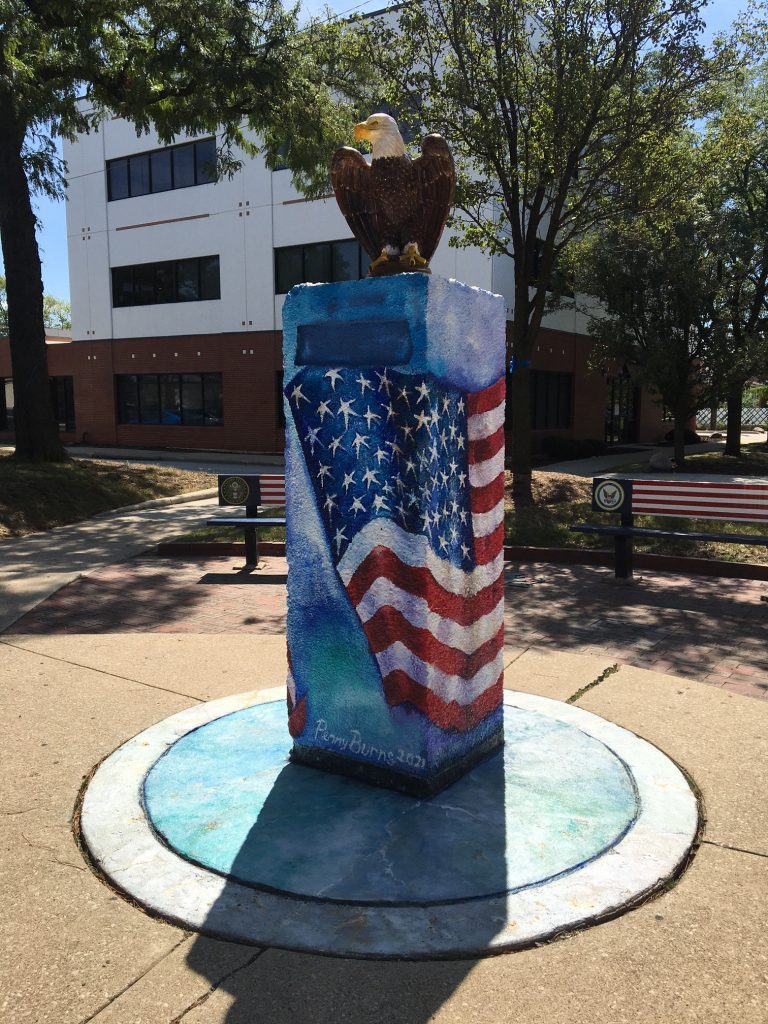 I have been driving by the triangle at 55th, Archer and Narragansett since I’ve lived in Garfield Ridge.

These days it’s worth stopping and parking the car to really see the visually stunning site it has become. Slowly but surely, artwork has become an integral part of the triangle, along with the benches and the decorative pavers honoring military members—both veterans and those who died while serving their country.

The latest object of interest was until recently a grayish Bartlett Gatepost. Now it is a canvas painted by Penny Burns, an artist who calls Garfield Ridge home. 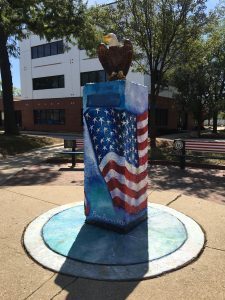 Geno Randazzo of All Exterior Contractors commissioned the work. Penny was recommended to him as an artist who could beautify the post.

The results tell the story. It took her about three weeks total, Penny told me, working when she could from the end of July to the beginning of September. The post has the American Flag painted on it against a lighter blue background. The flag looks real, like it’s fluttering in the breeze. She also painted the eagle on top of the post. She transformed what was a plain-jane cement base into what appears to be a marble base at the bottom. It fits in so well with what inhabits the triangle now.

Penny told me she was given free rein on what to paint on the gatepost. She felt adding a permanent American flag to the triangle was a no brainer.”

The “canvas” she was working on was, in reality, an aggregate–basically small pebbles.

Penny described working on the post as a challenging. “Give me a beach. I’ll paint it next,” she laughed.

The artist’s preferred medium is wood, and her works are displayed in galleries, but she has painted more than one mural on outside and inside walls. “If you want me to paint it, I will give you my best,” Penny told me.

When I asked her how long she has been an artist, her response surprised me. “Forever. It came into this life with me.”

Not only is she an artist, but a musician, performing in clubs around the area. The music came later. “I started in high school. I learned the cello and was a singer.” She went on from there.

She wants to attract people to the Southwest Side and its surrounding suburbs, noting that art and entertainment abounds in the area, but no one knows about it.

Her path led her to the triangle and the now beautiful American flag on the gatepost. “I’m surprised how striking it is, how beautiful it is,” Penny said.

Apparently, visitors to the triangle agree. One woman asked Penny, “Were the benches here before? I never noticed them before.”

Penny said to me, “The whole area is lit up now.”

Geno, who commissioned the artwork, was enthusiastic in his praise.

While she was painting it, people would come over in the early morning to watch her. She was aiming to create a peaceful place where people could come to contemplate, to just sit and be.

One woman would come over with her children. She told Penny it reminded her of the Navy.

“A veteran who was in tears thanked me for what I was doing. I felt complete acceptance. It was really nice. The beauty of the residents was touching. It was a nice way to spend summer vacation,” Penny said.

The Garfield Ridge Chamber of Commerce is offering local authors the chance to showcase their works from 3 to 7 p.m. Wednesday, Sept. 29 at their farmers market, located in the parking lot of Mayfield Banquets, 6072 S. Archer. If you are a local author and would like to participate, email the chamber at [email protected] For more information, call (773) 767-0014.

This is the last day of the season for the farmers market, so take one last gander at all the goodies available at the market.

It’s Sell-A-Bration time. The Garfield Ridge Neighborhood Watch is hosting its semi-annual yard sale from 8 a.m. to 1 p.m. Saturday, Sept. 18 in the Kennedy High School parking lot. You can rent a space for $25.

Parking is in the south lot between the church and school. Representatives from Osco will be on hand to give flu shots and COVID-19 vaccinations shots at 9:30 a.m. Flu shots are free with your insurance/Medicare/Medicaid card.

Annual dues are $10, and there is a $3 door fee at each meeting to help cover refreshments and expenses. Give them a try, won’t you?

I hope you have a wonderful week. I’ll see you next time. If you have news, drop me a line.