Skip to content
September 15, 2021/Comments Off on Pet Parade returns to La Grange for 75th year 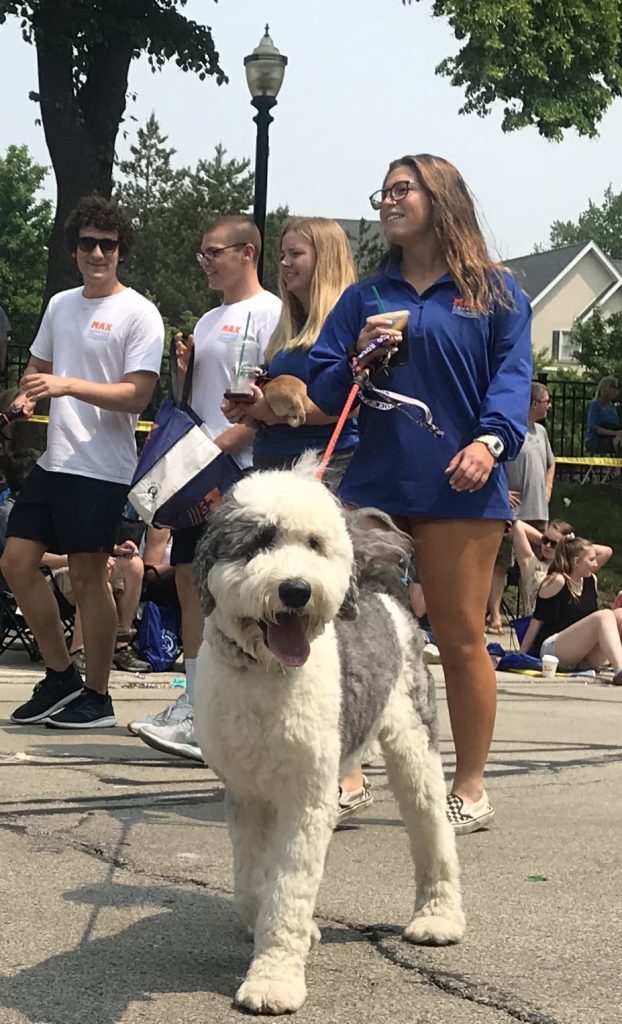 Pooches, cats and other critters, as seen here in June 2019, will return to the streets of La Grange on Saturday for the 75th Pet Parade. (File photo)

After a year of not seeing folks march with their dogs, cats and other creatures down the streets, anticipation is high for this year’s La Grange Pet Parade.

Last year, the parade was held virtually and people watched on their computers or cell phones. It was a far cry from the live-action parade, which kicks off at 9:30 a.m. Saturday for the 75th time.

Had the organizers been forced to go virtual again, there’d be no parade on Saturday. As it is, the parade – which is normally held on the first Saturday after Memorial Day – was pushed back to September by the pandemic.

“We decided that if we couldn’t be in-person again, we would cancel it because we felt to do another video parade was not doing the parade enough justice,” Price said.

They’ll be treated to the singing of the national anthem by local rocker Jim Peterik – of Ides of March and Survivor – who will sing at the main reviewing stage in front of Palmer Place at 9:20 a.m.

Peterik is not the only rocker in the parade.

Josie Dunne, a successful recording artist who graduated from Lyons Township High School, will be featured on a float which has a theme based on her upcoming album entitled “Tennis.”

Other guests of honor include Dr. Ngozi Ezike, a La Grange resident who is director of the Illinois Department of Health; Dean Bissias, who is retiring after 28 years as director of the Park District of La Grange; and Thurber Stowell, who served in the Navy from December 1942 to January 1946 during World War II.

Price is ecstatic that the parade is being held live once again on the streets of La Grange.

“Everybody was excited to have it in person, and I didn’t think it was tough (to put the parade together),” Price said. “We’re happy to be in person and to be together.”

A slight glitch is we won’t see Shriners on their motorized flying carpets because of a convention, she said. But we will see two groups of Shriners, one in tiny cars, the other riding motorized coolers, Price said.

Other than that, the parade is pretty much back to normal with 100 entrants, just under the usual 115 or so, Price said.

If nature calls, facilities will be available at La Grange and Elm Avenue, La Grange and Harris Avenue, and Burlington and Stone Avenue.

It wouldn’t be a parade without high school marching bands, and there will be two, one from Riverside-Brookfield High School and one from Lyons Township High School.

The Junior Grand Marshal for the parade is a fourth-grader from La Grange, Elise Diaz.

Elise was given the title based on coloring contest results that took place earlier in the year. Elise will ride as Junior Grand Marshal in the 75thparade, in her own convertible.

“The La Grange Art League chose her as the winner,” Price said.

Traditionally kids 16 and under have been invited to participate in these contests, in which pet and owner dress up in a creative costume, but recently there are adult categories, too.

Cash and gift certificate prizes will be awarded. Sign up must take place in person at the Park District of La Grange or the La Grange Public Library.

Seventy-fifth anniversary parade books and T-shirts are being sold at The Elm, Vintage Charm and Whisper Me Home.

BuckleDown Brewing in Lyons even created a special Pet Parade pilsner this year. You can find it at the brewery, 8700 W. 47th St., or at downtown venues.

Although the event is outdoors, those who feel they want to wear masks should, Price said. If you’d rather watch at home, the parade will also be livestreamed at www.lagrangepetparade.org.

It was intended to bring the community together around the idea of a pet and child costume contest parading down the main street of the Village of La Grange.