Skip to content
September 17, 2021/Comments Off on New bus will be rolling for Township of Lyons seniors

New bus will be rolling for Township of Lyons seniors

The Township of Lyons is getting a new bus for its popular senior services that saw 2,300 riders in the month of August.

The bus is officially called a “2021 Microbird DS Series 12+2 Wheelchair Bus” because it has room for two wheelchairs.

The township board approved an $18,741 lease payment to Central States Bus Sales Inc., based in Big Rock.

This will give the township two buses that it owns and two that are leased from PACE, Township Supervisor Christopher Getty said.

Trustee Colleen Kelly said the township will now have two 2014 buses and one 2017 bus to join the new bus. Seniors around the township get to ride for free to doctor appointments, grocery stores, etc., she said.

In other business, the board also approved paying $7,792.50 for carpet tile to be installed in the community room, where the board meets. The carpet tiles will be installed by DeSitter Flooring, based in Bolingbrook with a site in La Grange.

There was a brief but amusing discussion about the names of the different colors of carpet tiles, before the board settled on “Mutiny” as the color of choice.

The board also had to approve a change order request from All Construction for $8,893 for a feed to the new electric sign that sports the township logo on the side of the building. The sign is up and running.

Trustee Donna McDonald, who oversees the Committee on Youth, said the summer intern program placed 42 workers at 20 different agencies around the township.

Also, the township board approved several donations and grants to various organizations:

Trustee Mark Anderson, who abstained from the vote, is a member of the Mustangs, which – because of the coronavirus pandemic – had to cancel several fundraising events in the past year.

“We had to cancel the chicken barbecue and the skilly, so we’re coming up with new methods to revitalize the club and get the club moving forward,” Anderson said.

Brats, hot dogs and other food will be sold. There will be a raffle. Of course, being a Lyons Mustangs event, draft beer will be available. And, there will be entertainment.

“We’re going to have a one-band band,” Anderson said. “We’re closing off the street. There will be parking at George Washington School and the band will be on the street.”

Getty invited trustees and others to ride on the township’s float in the Pet Parade earlier in the day on Saturday. The parade begins at 9:30 a.m. in downtown La Grange. It returns after taking a year off because of the pandemic. The 2020 version was virtual, using video clips that people had sent in. 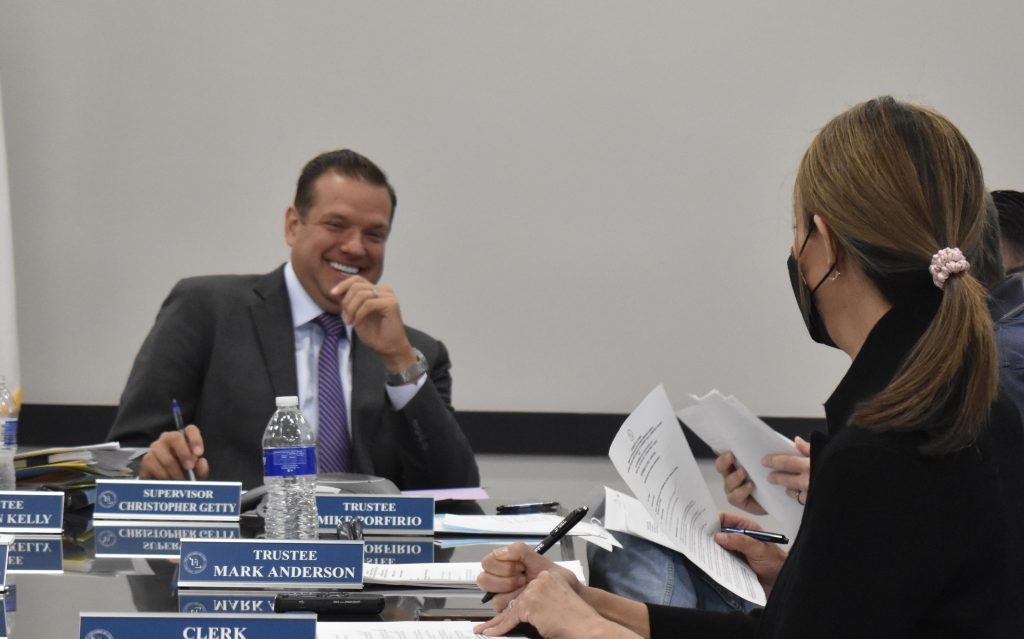 Township of Lyons Supervisor Christopher Getty enjoys a light moment while the board discusses carpet tiles. (Photo by Steve Metsch)