In the aftermath of the double shooting Sunday night, police and others tend to the two men wounded. --Supplied photo

The day after a double shooting down the block from the St. Nicholas of Tolentine Parish Carnival, a range of reactions could still be seen and heard in West Lawn’s northeast corner.

Nearby Hubbard High School was on edge Monday, as rumors flew about a threatened, retaliatory gang shooting that did not materialize. A number of parents, alerted by their teenage sons and daughters attending the school, showed up early to try to pull their children out of classes.

The night before, two men—ages 18 and 19—were shot in the buttocks as they stood on the south sidewalk of the 3700 block of West 62nd Street, close to the St. Nicholas of Tolentine Parish rectory—itself just steps from where the four-day parish carnival was in its final hour at 62nd and Lawndale. 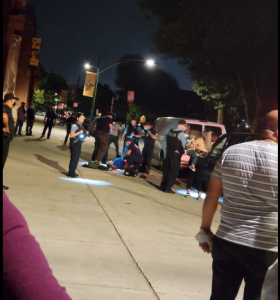 In the aftermath of the double shooting Sunday night, police and others tend to the two men wounded. –Supplied photo

The victims were taken to Advocate Christ Medical Center, where they were listed in fair condition. Police did not speculate on whether the shooting was gang related or not, and they said the victims were not able to provide significant details about the crime. No one is in custody.

When shots rang out, a number of children at the carnival screamed and tried to find cover, according to eyewitness accounts.

Parents were at least as frightened.

“My three-year-old daughter was on a kiddie ride, strapped into her seat,” said Marisol Pacheco. “I screamed at the carnival worker to stop the ride so I could go get her. He did his best to help. It was horrifying.”

Another woman who asked that her name not be made public said she had left the carnival early after her mother warned her about brewing gang violence.

“My mom saw these gangbangers hanging around the fringes of the carnival, as gangbangers sometimes do,” she said. “She told me to get out of there and go home, so I grabbed the kids and left. This was at about 9 o’clock.”

On multiple social media platforms, opinions were varied. Some were quick to defend the parish and say the shooting did not technically occur at the carnival—and that it would have happened, carnival or no carnival. Others said carnivals attract gang members looking to settle scores with rival gangs, as well as prove themselves to fellow gang members.

Still others blamed what they said are chronically slow response times from police. Others blamed local elected officials, as well as carnival organizers for what they claimed was not enough security at the event.

A few claimed the shooters were probably from outside the neighborhood. Some said the area has worsened in recent years.

“Everyone in this neighborhood needs to look in the mirror to find out who’s responsible,” he said. “I think about how so many people in this area stood together last year to patrol our streets and stand together against rioters and looters from outside the community. Well, this time we’re dealing with the enemy from within. If we use the same approach we saw in 2020 against the looters—and turn that energy against the gangbangers who live here—we can make the St. Nick’s area a very good neighborhood. It’s up to us.”