Skip to content
September 23, 2021/Comments Off on 75th Pet Parade attracts huge crowd after year off 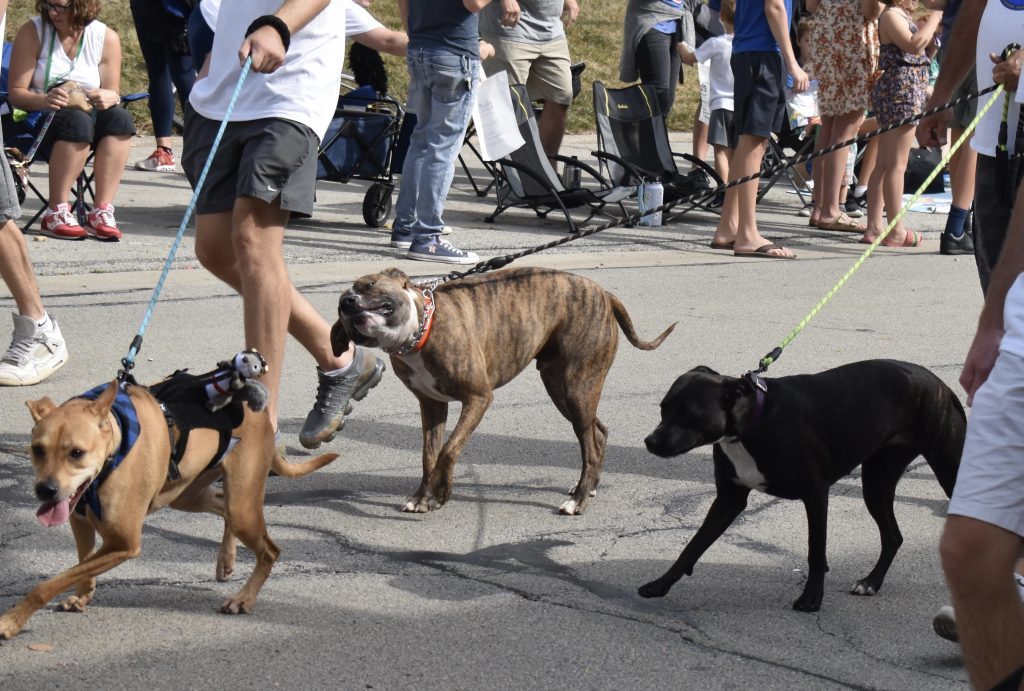 There were plenty of pet dogs marching in Saturday's Pet Parade in LaGrange. (Photos by Steve Metsch)

After waiting more than two years, John Bezerril and his sons were finally able to enjoy the La Grange Pet Parade live and in person.

The last time the parade was held live was in June of 2019, long before the words “COVID-19” and “pandemic” became part of our daily vocabulary.

On Saturday, thousands of people lined the downtown streets of the village for the 75th edition of the parade. 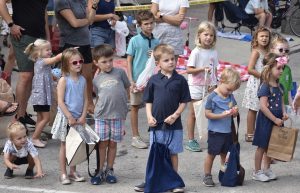 Children wait for candy handed out during the parade.

There was a buzz in the air, perhaps because the 2020 parade was held online, using video clips folks had sent in, after the COVID-19 pandemic forced its cancelation.

This year’s live version had 100 entrants who marched beneath a warm September sun.

Bezerril and sons Julian, 6, and Aaron, 4, sat on the parkway on the east side of La Grange Road, south of Cossitt Avenue.

“The kids have been waiting for this day for a long time. I think it’s wonderful,” Bezerril, of La Grange, said. “We missed it last year. It was a bummer. Now that it’s back, it’s awesome.”

That was the sentiment of pretty much everyone along the parade route.

The crowd was treated to a wide range of entertainment.

Children clutching bags gathered candy and other treats handed out by folks marching in the parade.

Local businesses had a strong presence.

And, of course, there were plenty of pets in the parade, most of those being dogs.

Countryside resident Toni Manzo watched the parade with her niece’s dog Ricco on a leash as she stood near the Lyons Township High School fieldhouse.

Manzo decided to not march with Ricco in the parade “because he’s so nervous.” But she’s glad to have attended.

“It’s so cool. A nice event and well received, obviously,” Manzo said. “People are craving for things to do, to get out of the house. … I enjoy it.”

The crowd enjoyed popular returnees like Tommy Hawk, mascot of the Blackhawks; The Lawn Rangers, a drill team from downstate Arcola that performs routines using lawnmowers and brooms; and the Jesse White Tumblers, whose leaps continue to defy gravity. 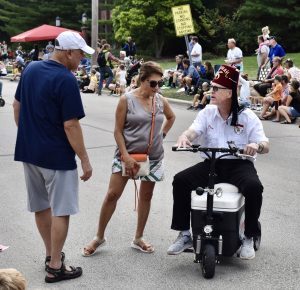 A Shriner discusses the skill one needs to ride a motorized cooler.

Township of Lyons Supervisor Christopher Getty made a long overdue return to being in the parade.

Getty fondly recalled when he was selected king of the fifth grade at George Washington School in Lyons.

“It was an amazing experience,” Getty said. “We had to get dressed up. I was in suit, in a convertible, waving.”

“So, I’m back and this time we’re coming out in force,” Getty said. “We’ve been doing a lot of outreach this summer through the township.”

Dozens of people wearing blue T-shirts bearing the township logo handed out candy, fans and other freebies. Some waved as they rode in a trolley that played pop songs on a loudspeaker.

Waving back at many in the parade were Heather Schrock, of Brookfield, and daughter Hadleigh, 5, who made their Pet Parade debut on Burlington Avenue.

“We had no idea what to expect,” Schrock said. “We’ve been here for three years, but her school was marching in the parade, so we’re like, ‘Let’s go for it, let’s do it’.”

“I had no idea it was this huge,” Schrock said. “We’re happy to be here. We’ll definitely be back, for sure.”

Hadleigh attends kindergarten at St. Cletus School in La Grange, which had dozens of students marching in the parade.

Hadleigh said the Pet Parade was fun “because we get to pass out candy.”

Asked if she kept any candy for herself, an impish grin crossed her face as her mother opened a paper bag and said, “just a few.”

Hadleigh may be marching again soon as next year’s Pet Parade is scheduled for June 4.

The parade, usually held on the first Saturday after Memorial Day, was pushed to September because of concerns earlier this year regarding large crowds gathering during the pandemic.

Not many masks were seen Saturday. They were replaced by plenty of smiles. 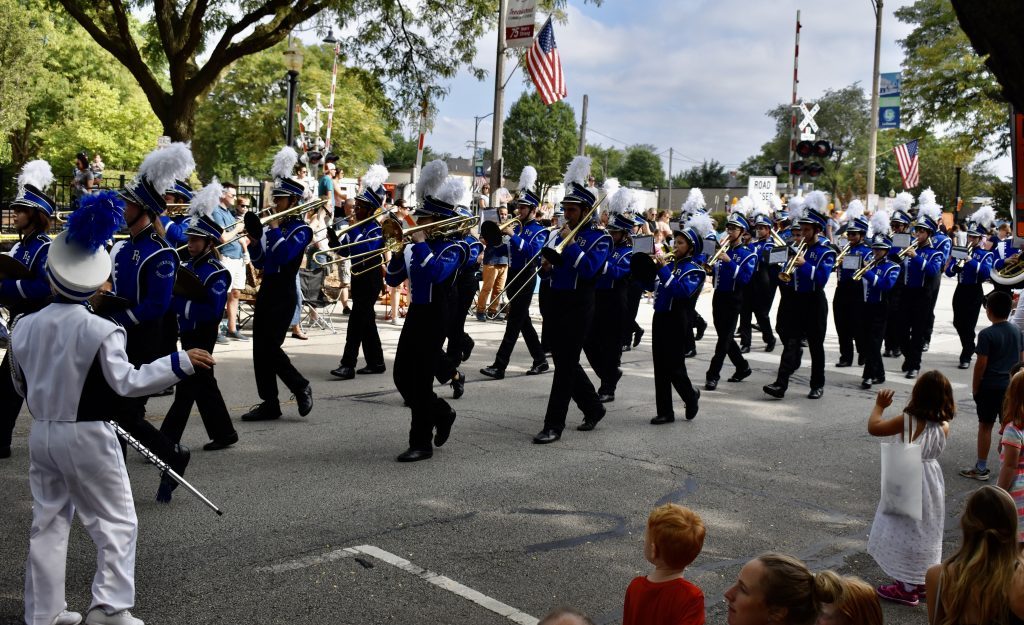 The Riverside-Brookfield Marching Band was in fine form.