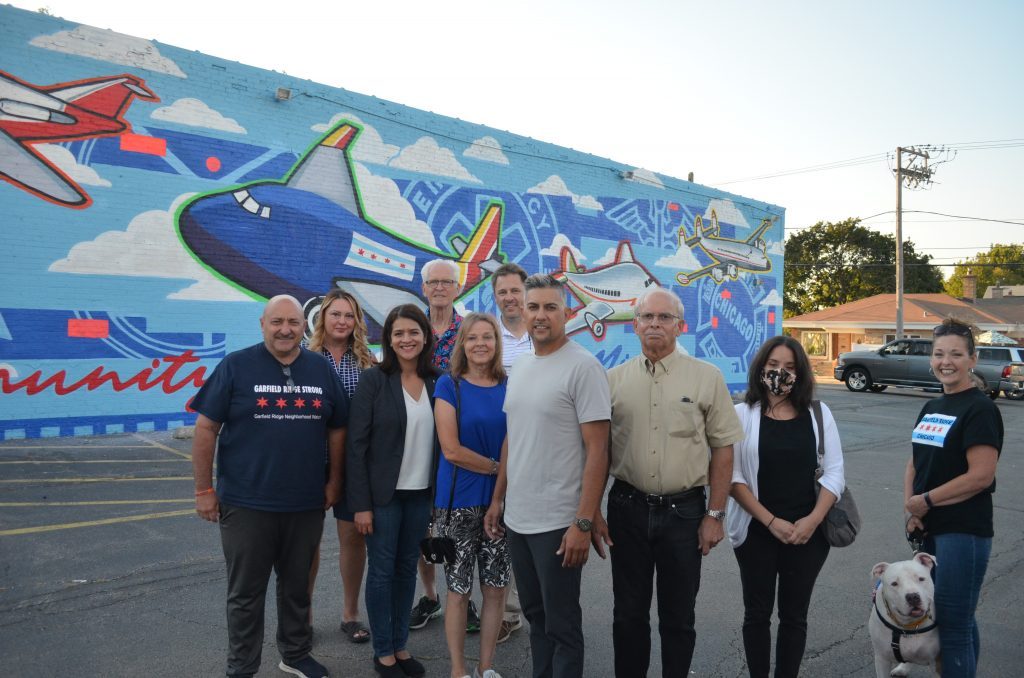 A gathering of neighborhood representatives celebrated the new work of public art. --Photo by Tim Hadac

‘This is the public’s gallery’

What once was a drab, blank wall in Garfield Ridge is now a bright, cheerful reflection of the community.

“We’re proud of what we have here,” 23rd Ward Ald. Silvana Tabares said at a recent gathering of a handful of Garfield Ridge area residents to celebrate the successful completion of a new mural on the east wall of the building at 6456 W. Archer–currently home to the Fit Code fitness center and for years before that, an independent pharmacy.

The brightly colored work of public art pays homage to the area’s aviation and railroad history and salutes police officers, firefighters and other first responders. 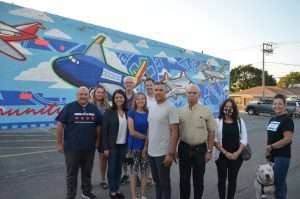 A gathering of neighborhood representatives celebrated the new work of public art. –Photo by Tim Hadac

“There are many reasons this mural is a good idea,” Tabares said. “Just one of those reasons is it helps fight crime. Last year, this wall got tagged with graffiti, which we had removed.”

Another reason is even though the mural is on private property, it is highly visible to the public, and therefore “becomes the public’s gallery,” added Violeta Sosa, the alderman’s lead staffer on matters concerning public art and neighborhood beautification. “People walk by on the street. They enjoy it. It can be used to fight crime, fight graffiti—but it’s also wonderful to look at. The kids can walk and look and see, and it also brings a sense of pride to the community.”

The mural was painted by local artist Milton “Milt” Coronado and funded through a Chicago Department of Cultural Affairs and Special Events grant for $2,000. He painted the mural over a 23-hour period earlier this month. 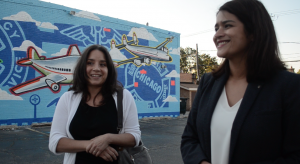 Twenty-third Ward Ald. Silvana Tabares (right) and Violeta Sosa talk about the importance of public art in Garfield Ridge and in every community. –Photo by Tim Hadac

“The design came from brainstorming with members of the community—what people who live here see as important, as it relates to this area,” he said.

The predominant color in the mural is blue—in several engaging shades.

“Color has an impact on people, emotionally and mentally,” Coronado said. “I had that in mind while I was planning this mural, and the reaction has been all positive. People were walking by, driving by, honking at me, cheering for me—it was nothing but good vibes, and it made perfect sense.”

“I think it’s fantastic,” said Bob Russo, a founder and current board member of the Clear-Ridge Historical Society, as well as a retired pilot. “It covers the history of Garfield Ridge and Clearing perfectly.” He noted that the four different airplanes in the mural are emblematic of Midway International Airport’s development over the last century from a pioneer in modern municipal aviation to a 21st century international airport.

“I love it, it reflects the neighborhood beautifully,” she added. “Murals get people out in the street and help them feel good about where they live and own businesses.”

Those at the celebration were unanimous in their praise of Tabares for leading the effort to bring public art to the neighborhood and ensure that the community had a voice in its content.

Also praised was building owner Tom Hushka, who gave his consent to the project.

The city grant given to Coronado was markedly less than what he had requested, meaning there were no funds to apply a coat of sealant to the mural—which would have protected it from sunlight, as well as graffiti.

Upon hearing that, Brown immediately stepped forward to say the GRCC will pay the $2,200 needed to purchase the sealant and have it applied.

“The business owners of this community care about this community,” she said. “Every dollar we spend right here at home is money well spent.”