September 26, 2021/Comments Off on Winning one for the champs: SXU drubs St. Francis on day 2011 team is honored 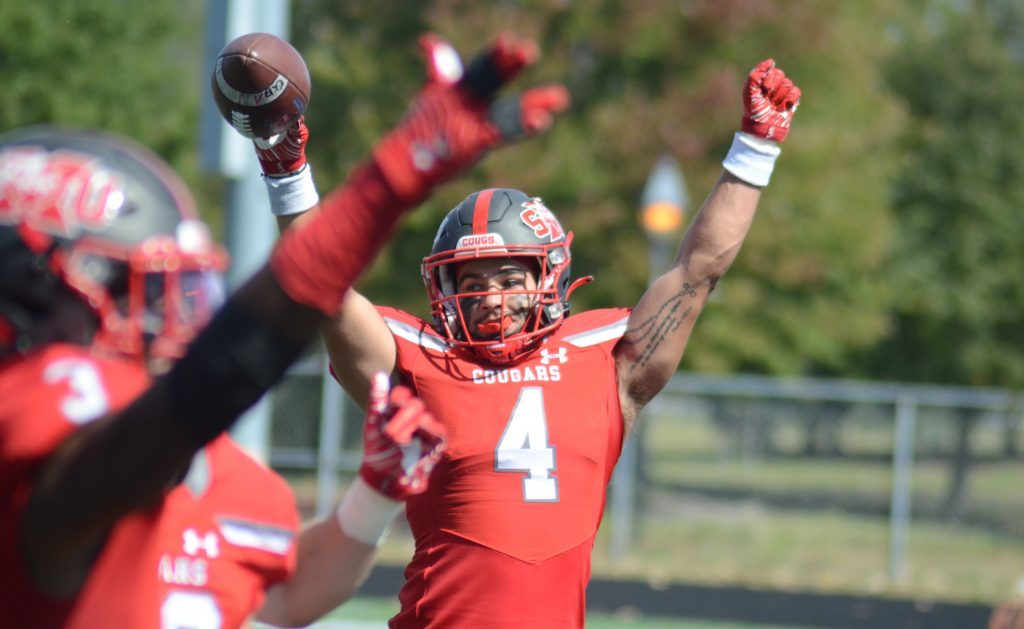 SXU’s Peyton Nigro reacts after a fumble recovery in a 38-0 win over nationally ranked St. Francis of Indiana. Photo by Jeff Vorva

Winning one for the champs: SXU drubs St. Francis on day 2011 team is honored

Approximately 30 members of Saint Xavier’s 2011 NAIA National Championship team were at their old stomping grounds last weekend to be honored for their title-winning efforts and watch the Cougars take on St. Francis (Indiana).

Under their watchful eyes at Deaton Field, the 2021 version wanted to give them something fun to see.

St. Francis entered the game ranked 13th in the nation in the NAIA coaches’ poll.

St. Francis had been shut out only twice in a history that goes back to 1998 — once in 1999 and once in 2002, and both were in playoff games against Georgetown. In more than 200 regular-season games, St. Francis had not been blanked until Saturday.

“It was everything I could dream of,” junior Ron Carroll said of playing in front of SXU legends. “They set the tone for us, so we had to put on a show for them.”

“That’s something I’ll never forget,” sophomore receiver Brandt Hixson added. “Having a team that brought a national championship here and knowing that we’re trying to get back to that level, it was great to play in front of them and having a score like this.”

About that score? Who would have predicted that?

Certainly not coach Mike Feminis, as the Cougars had gone 5-10 against St. Francis over the years.

The Cougars improved to 2-1 as they head into Mid-States Football Association Midwest League action at 19th-ranked Roosevelt at 7 p.m. Saturday.

It was the first time since 2012 the Cougars shut out a top-25 opponent.

Feminis was happy his current troops could play so well in front of the best team in program history.

“It brought a tear to my eyes,” Feminis said. “I’ll tell you, some of those guys could have helped us. Some of them are still in pretty good shape.

“I’m so proud of our guys and the way they responded. We told them all week how important this game was and how important it was for the program.”

St. Francis (1-1) marched down the field on the first drive looking like one of the top teams in the nation. But that drive stopped when Carroll intercepted the ball in the end zone after it bounced off two players. 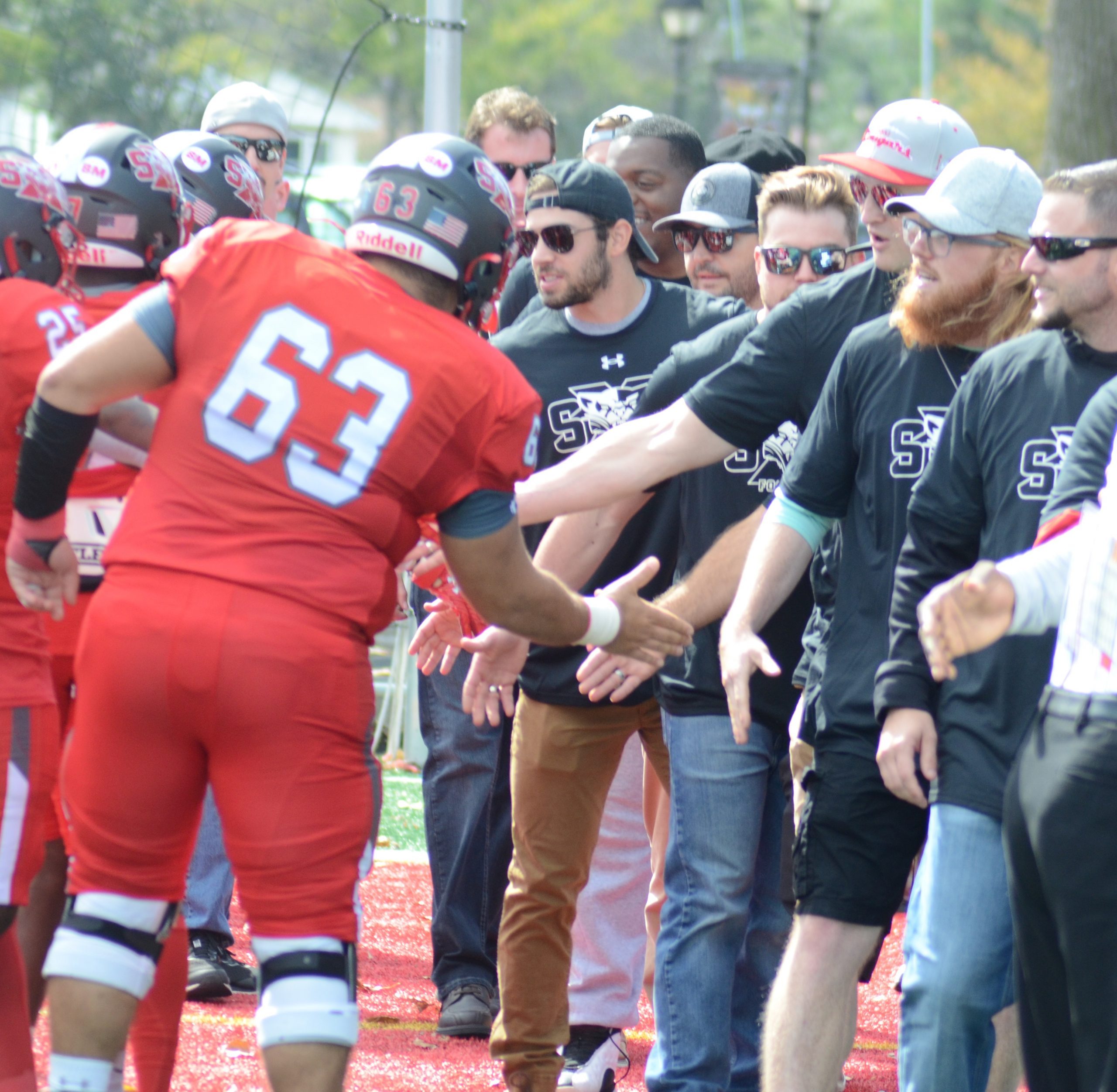 “When we got the pick, the motivation shifted for everybody,” Carroll said.

Jacob Denney had a 26-yard interception return for a touchdown and the defense racked up six sacks.

One week after Hixon was named NAIA Special Teams Player of the Week after a 96-yard kickoff return for a touchdown in a win against Siena Heights, he hauled down four passes for 91 yards and nabbed the first touchdown of the game with 14:51 left in the second quarter.

After playing the first game of the abbreviated spring season and going through two shoulder surgeries, the Machesney Park native is taking nothing for granted.

“These last two weeks have been amazing,” he said. “I’m having a great time and enjoying every second that I’m out here.” 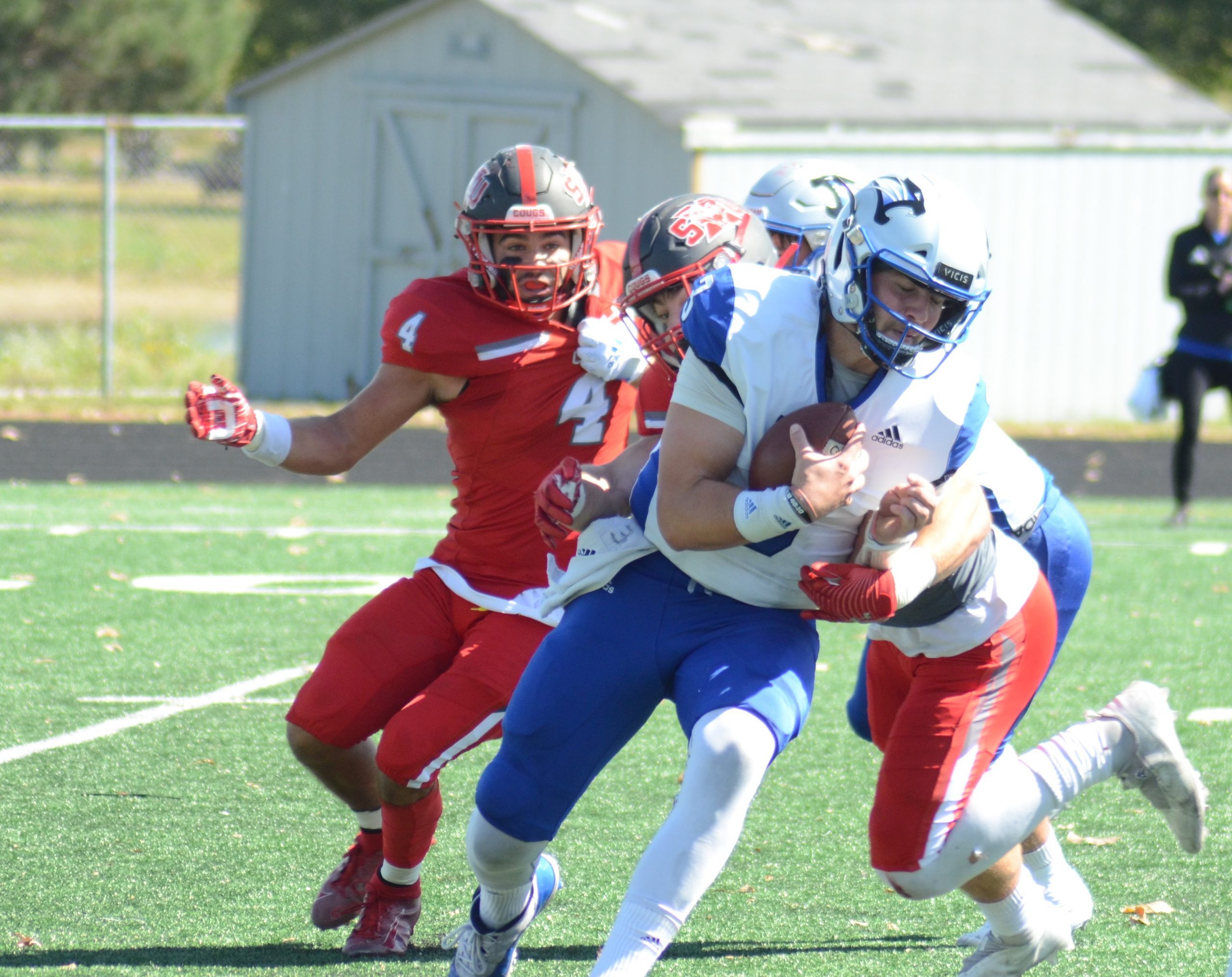