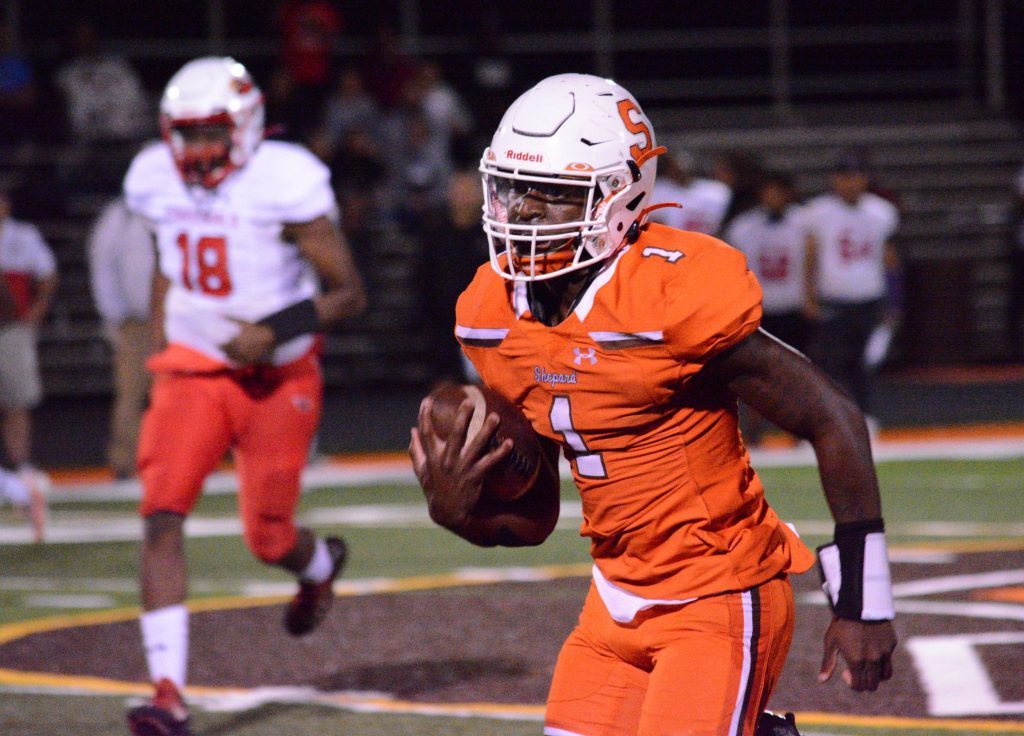 Shepard senior Kendrick Washington runs for one of his three touchdowns in a 27-0 win over Eisenhower on Sept. 24. Photo by Jason Maholy

One down, four to go.

Entering Week 5 winless, Shepard was faced with having to run the table to have any hope of qualifying for the IHSA playoffs for a sixth consecutive season. Five wins will most likely get the Astros into the postseason, given their strength of schedule, but with one more loss eliminating them from contention every game is essentially a playoff game from here on out.

They took that first step toward returning to the postseason with a 27-0 victory over Eisenhower in a South Suburban Red matchup on Sept. 24. Shepard (1-4, 1-1) got a dominant performance from its defense, rushed for 303 yards and played its best overall game of the season to earn its first win this fall.

Astros coach John Rone thinks his squad can rally down the stretch if they continue to play like they did against the Cardinals. The defense held Eisenhower to 97 yards from scrimmage and allowed only two first downs, the latter matching a Shepard single-game record.

Shepard also forced two turnovers — including an interception by junior defensive back Elijah Tyson — blocked a punt out of the end zone for a safety and got a 36-yard field goal from junior kicker Zaid Jaber. 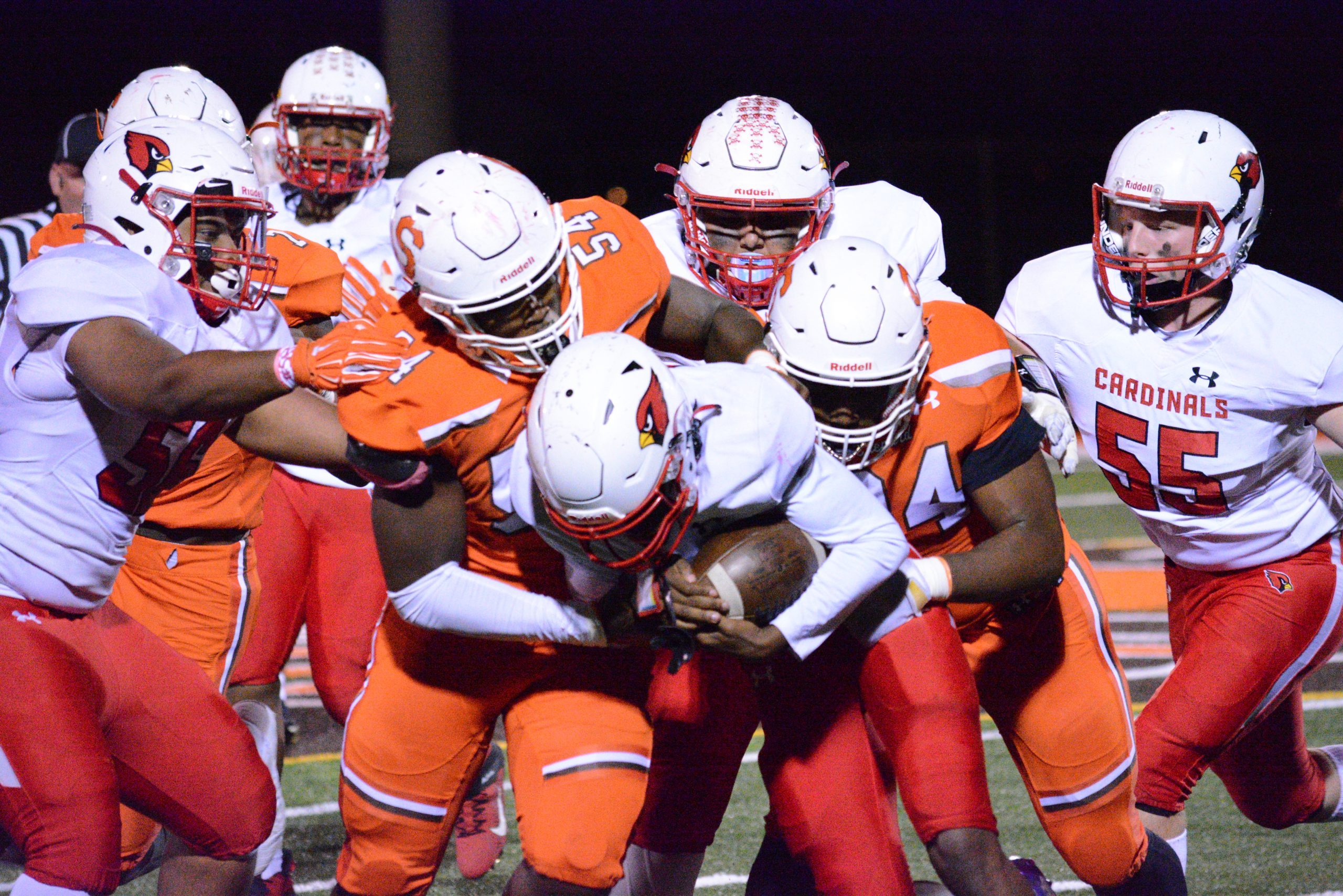 Shepard defensive lineman Jeremy Rowlett (54) and Demari Garrett team were part of a dominant defensive effort in the win over Eisenhower. Photo by Jason Maholy

“We obviously would have preferred to win a couple of those,” Rone said. “After the loss to Richards we were 0-4, but we came into film the next day and all our guys were there. That says a lot about the character of these young men and as long as they keep growing we’ll be fine.”

Shepard played Ike without starting quarterback Quran McClellan, but with an offensive line paving the way for the running game they didn’t need to put the ball in the air. Kendrick Washington led the attack with 20 carries for 177 and three touchdowns, and Xavier Rogers added 18 carries for 121 yards.

“We stayed within our system and we have packages for Kendrick and Elijah, and Lascola did a good job coming in,” Rone said.

Washington was electric, running for scores of 17, 45 and 46 yards on designed runs from the quarterback spot.

The Astros got a lift from 6-6, 315-pound junior offensive lineman Seth Vander Weele, who had missed some time.

“That helped the offensive line play better,” Rone said. “And we got a field goal, picked up a first down on a fake punt — just complete in all three phases. And I really loved how when things got a little chippy at the end we kept our composure and didn’t do anything stupid. That showed some mental toughness, which we always like to see.”

Shepard will attempt to keep its playoff hopes alive with a win over Evergreen Park in Week 6. Kickoff is scheduled for 7 p.m. in Palos Heights.

The Mustangs (4-1) began the season with three consecutive shutouts against Manteno, Carver and Reavis before falling, 34-27, to Bremen in Week 4 and edging Argo, 14-13, last week. 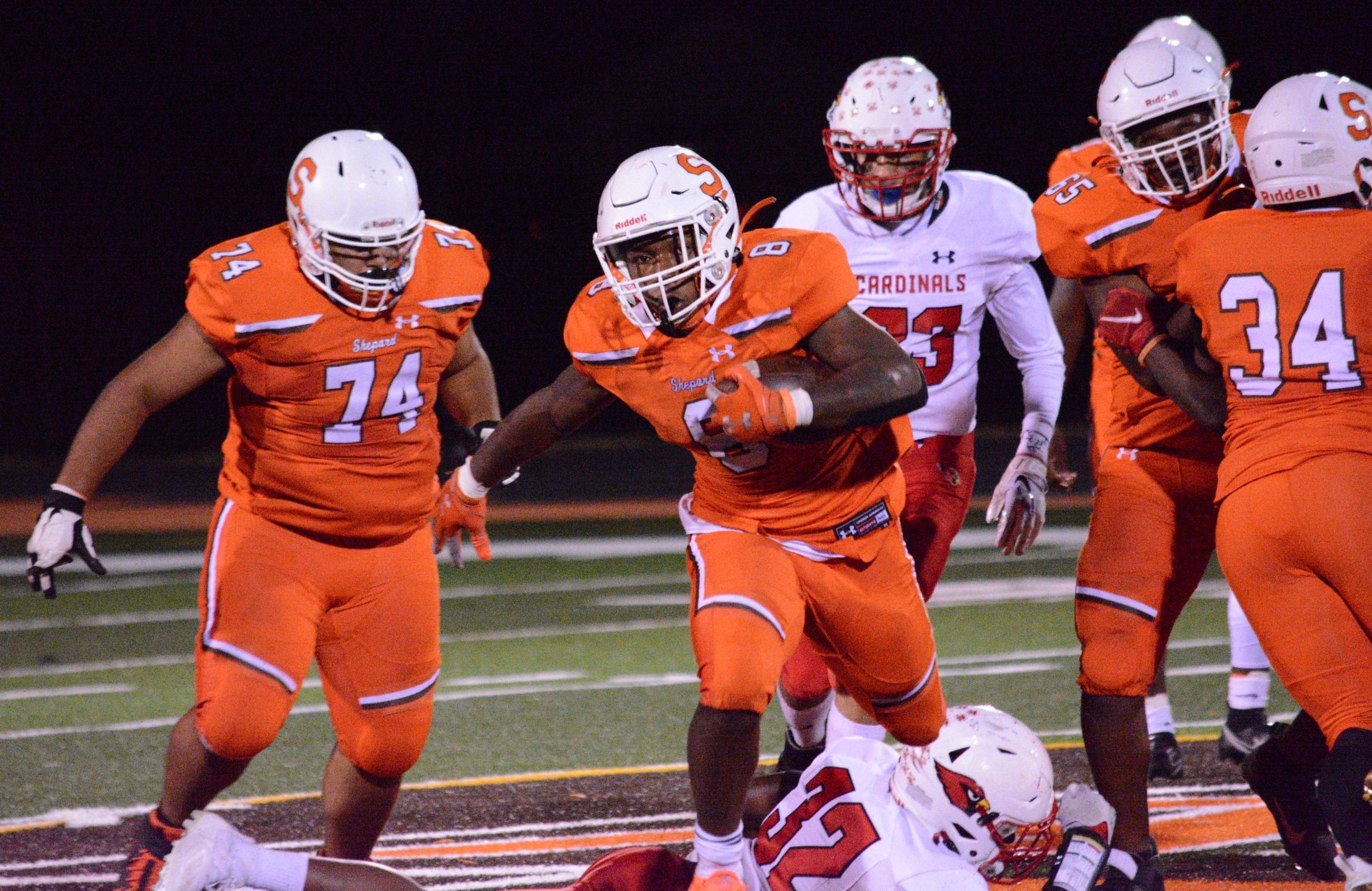 Shepard running back Xavier Rogers runs over an Eisenhower defender on his way to a chunk of his 121 yards rushing in a 27-0 win over Eisenhower. Photo by Jason Maholy