Skip to content
October 4, 2021/Comments Off on Four Sandburg golfers headed to state 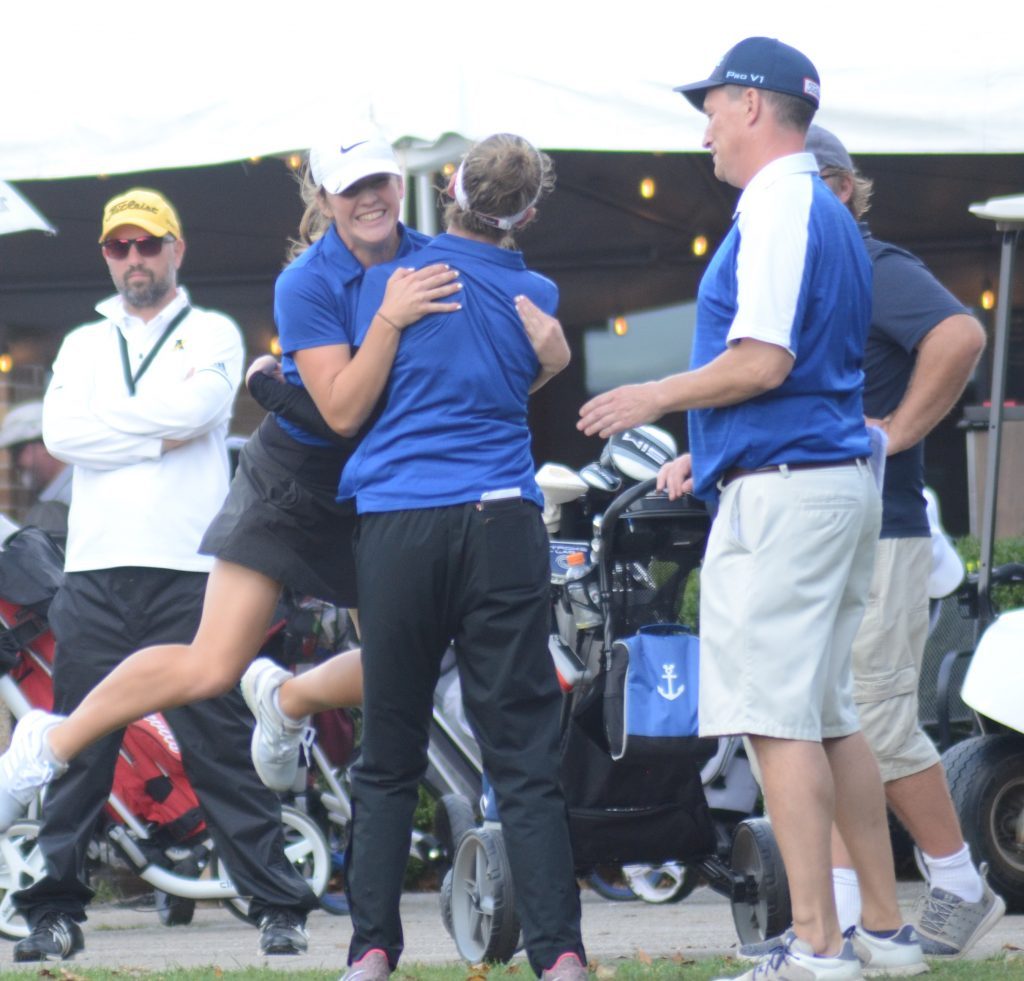 Jillian Cosler hugs teammate Katie Mikso after her round at the Hinsdale South Sectional as coach Todd Allen (right) looks on. Both girls advanced to Friday’s ISHA Class 2A State Tournament. Photo by Jeff Vorva

A small contingent of area golfers will be at this weekend’s IHSA state tournaments.

Cosler, a junior who was a champion at the Sandburg Regional, fired a 75 at the Hinsdale South Sectional at the Village Greens of Woodridge. After the 18th hole, she sprinted to teammate Mikso, who shot a 74, to give her a big hug.

“I was so proud of her,” said Cosler, who finished sixth.

Cosler finished third in last year’s sectional at Silver Lake Country Club. Mikso said she doesn’t recall where she finished, but that she had a round to forget.

She shaved off 17 shots from last year’s performance and finished tied for third.

“I was feeling confident going into it,” Mikso said. “I’ve been playing so much better. Jill and I had a conversation this morning about having positive attitudes.”

Both said they have spent a lot of time working on their short games between high school seasons.

“The short game’s the game,” Cosler said. “If you don’t have a good short game, you are not going to score well.”

Eagles coach Todd Allen was disappointed the Eagles couldn’t get a full team to state. Sandburg shot a 346 to finish sixth and were seven shots away from qualifying. But he was happy with his two individual qualifiers.

“They are fantastic — I couldn’t ask for two better captains,” he said. “I’m super proud of both of them, and I’m really happy for Katie because of her improvement from last year. She was good last year, don’t get me wrong, but she made big strides because she committed in the offseason.”

At the Lockport Sectional, held at the Nettle Creek Country Club in Morris, Sandburg’s boys missed qualifying for state by one shot. Lockport finished first with a 291 while Lincoln-Way East and Moline grabbed the final two slots with 298s. Sandburg was fourth with a 299. Pekin (302), O’Fallon (303) and Lincoln-Way Central (304) followed Sandburg in a very tight race.

At the Brother Rice Sectional at the Sanctuary in New Lenox, the Caravan’s O’Keefe carded a 77 to advance. At the Aurora Christian Catholic Sectional at the Phillips Golf Course in Aurora, Burns fired a 79 and McGuire and 80.

The boys won their own Class 3A regional at Silver Lake with a 296, while Marist (327) and Stagg (356) qualified for sectional.

Sandburg’s Negley was medalist with a 72. Junior James Hollowell led Marist with an 80 and Stagg junior Connor Olsen led the Chargers with an 84.

Sandburg’s girls won their own Class 2A crown at Silver Lake with a 329 as Cosler was medalist with a 71. Marist, led by senior Mallorie Clifton’s 79, was second with a 335.

Brother Rice, led by senior Joe Murphy’s 85, finished third in its own Class 2A regional. The team shot a 357. Matt Suchecki led St. Laurence with a 91.

Mount Carmel took second in the St. Rita Class 2A regional with a 341 as senior Ahmad Raoul led the team with an 82.