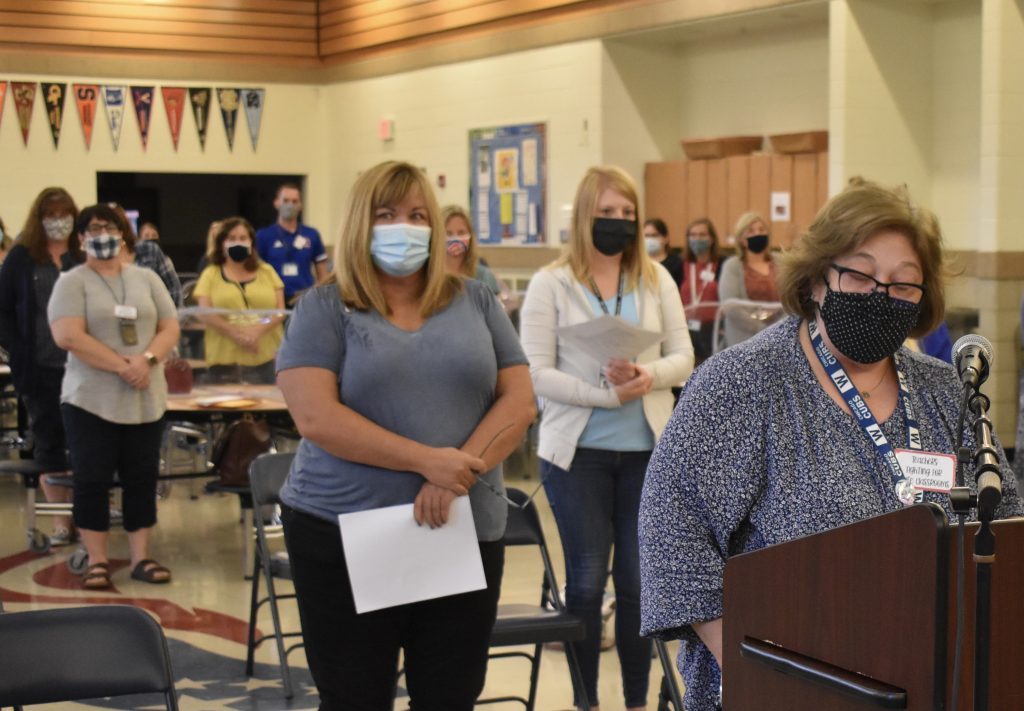 Teachers Union President Toni Jackman addresses the Lyons School District 103 Board with a list of concerns. (Photos by Steve Metsch)

The teachers union in Lyons School District 103 is not pleased with COVID-19 cleaning, some paycheck issues and operation of its preschool.

Union President Toni Jackman, at the school board’s meeting on Sept. 28, voiced the concerns of the 218 teachers she represents.

Three other union members – of the two dozen or so who attended – also talked about their concerns. Teachers stood in support as they addressed the board in the Washington School cafeteria. 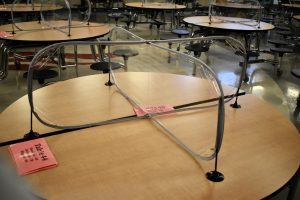 Jackman said “an already challenging school year” is “all the more difficult” partly because of the pandemic and responses to it.

Supt. Kris Rivera later broke with protocol. He addressed the union’s comments made during the public comment portion of the board meeting, something that is never done.

“We typically don’t respond, but I didn’t want this moment to go on without acknowledging you and saying that we hear you,” Rivera said.

“We did have a staff meeting that I led acknowledging their concerns, hearing out their concerns,” he said. “And we are working on an action plan I shared with (Jackman) on many of the specific items regarding how they will be resolved.”

The most significant issue at this time is the lack of clarity regarding COVID-19 protocols, Jackman said.

Cleanliness of school buildings is “not due to the maintenance crew not doing their job, but due to an insufficient number of staff to get the job done in full at a time when cleanliness is of utmost importance,” Jackman said.

The board hired three custodians at the meeting, and is expected to soon hire three more to bring staffing back to pre-pandemic levels.

Jackman said the preschool program has been mismanaged, but declined to go into further detail.

“We have full-time teaching positions yet unfilled, which also has additional frustration and pressure put on existing teachers to, quote, help out where they can,” Jackman said.

All the issues “could have and or should have been planned for and or resolved well before the school year started,” Jackman said.

Surveys of the teachers resulted in many discouraging comments.

One teacher who responded said the district “seems to be going through the motions when it comes to meeting our needs and the needs of our students.”

Another said “the pandemic and someone else’s mistake is the excuse for everything.”

Rivera said the issues “are important to us and I appreciate you coming out here this evening and sharing those.”

“Our administration is working hard to rectify these and, as I stated in the staff meeting, we are working on a more detailed action plan that will work to correct these issues,” Rivera said.

After the meeting, Jackman didn’t say much more about the union’s complaints.

“Some of the issues, like partitions (on lunch tables), we got our order delivered today,” Rivera said. “There were some payroll issues, legitimate, (and I) apologized for the inconveniences.”

He noted that executive orders from the state government regarding the pandemic can make things tougher to deal with.

“We saw some executive orders pop out in September,” Rivera said. “When those things happen, the protocols are a little different now, and we’re trying to play catch up.”